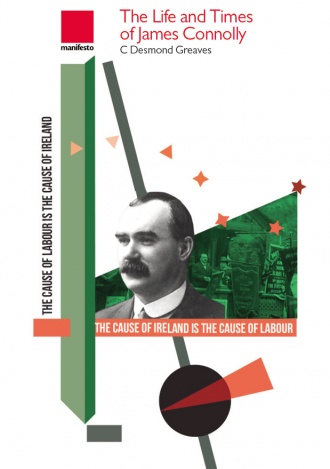 Earlier this year, while designing an exhibition for the TUC on relations between the British and US labour movements, I came across a 1908 photograph of James Connolly speaking at a May Day rally alongside local leaders of the revolutionary syndicalists of the Industrial Workers of the World and the Jewish Bund and other trade unionists and socialists.

Reproduced on the back cover it shows Connolly in a typical pose,  authoritative and forthright in communicating advanced ideas to workers.

Wherever Connolly found himself during his often troubled search for work he emerged as a local leader. In Scotland, in Ireland and in the US his particular combination of socialist principles, working-class unity and patriotism was inevitably fused into a consistent anti-imperialism.

A human picture arises of a man who reconciled the exacting demands of family life with his political duty and over the decades of his tumultuous life was able to combine a clear class analysis with a sharp polemical style always coupled with a firm grasp of the main practical tasks at every stage of the struggle.

Less than a decade after he spoke before workers in the US the wounded James Connolly, a casualty of the fighting in the Irish Rising and a trophy, as military and political leader of the Irish Citizen Arm, the prototypical armed workers’ militia, of the British imperial state was executed by firing squad by British soldiers pressed into the service of imperialism.

Manifesto Press in co-operation with the Connolly Association and Connolly Books in Dublin have republished The Life and Times of James Connolly.

Out of print for some time this book, written by the late C Desmond Greaves, the longstanding editor of the Connolly Association paper The Irish Democrat, is regarded as the principal authoritative source on the life of Ireland’s working-class national hero.

An authoritative preface by Greaves’s literary executor Anthony Coughlan points us in the direction of new sources of information including a collection of Connolly’s letters made by his former colleague William O’Brien.

Anthony Couglan provides for an international audience and most especially a British readership, from an Irish perspective, an object lesson in how Connolly’s distinctive politics have acquired a new relevance with the character of Ireland’s status as an independent state highlighted by challenges thrown up by Britain’s decision to leave the EU.

He argues that the contemporary relevance of Connolly’s political life in Ireland and its European neighbours stems precisely from the fact that the European Union and the crisis of its super-national currency, the euro, have made the national question, the right of nations to self-determination and independence, the central issue of European politics of our time.

From this account of Connolly’s life emerges a picture of a man who understood how the working-class movement has an objective interest in struggling for the highest form of democracy and in winning the widest sections of the people to this aim coupled with the aim of national independence.

Connolly, who knew first hand the nature of British imperialism, understood that the British nation itself could never be free whilst it enslaved others.

The Life and Times of James Connolly is available priced £11.50 from www.manifestopress.org.uk