Review All manner of things red, yellow and falling in this autumn of poetry

SEPTEMBER saw Linton Kwesi Johnson at the British Library discussing the work of poet Michael Smith, a writer seeped in the common voice of Jamaica who was popular and influential in Britain. 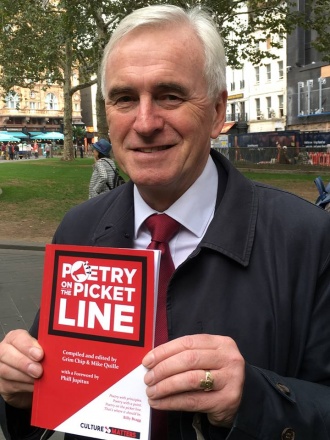 Both he and LKJ gave a lift to us here writing and gigging in our own accents and vernacular. The working class has a myriad of tongues, they all get the same look of reproach. Linton shed some light onto the life, and murder, of Smith and read some of his poetry.

Poetry discussions can be ruined by the awkward academic and Linton gave a textbook move of letting the one chairing this ask a few vague questions before cutting her off to read more poetry. Better yet, the rambling “look at me” questions from the audience got curt “yes” and “no” answers before finally Linton responded to a request for Sonny’s Lettah. The East Enders in the ‘ouse were well pleased.

Many booked acts refused to gig and stood by their principles. Apples and Snakes finally held a board meeting and, rightly, moved the gig from the Ritzy. Times are getting rough, they’ll get rougher yet. As LKJ has it:
“dem wi’ side wid oppressah
w’en di goin’ get ruff
side wid aggressah
w’en di goin' get tuff”

Principles are nothing without action. Back in ’68 Jeff Nuttall wrote in Bomb Culture that “the salaries for steppenwolves are quite high in some quarters.” ‘Tis ever thus.

The Free Verse: Poetry Book and Magazine Fair was a success. Presses and poets from across the country, and some internationals, met and mingled. This grassroots level of poetry is where such excitement as poetry offers is to be found. There are the bright young things, doddery old farts, and people saying things that matter.

I was on the Poetry on the Picket Line table where we sold our new anthology as well as a heap of donated second-hand books. The £227 proceeds went to the IWGB cleaners’ strike fund. Cheers.
The Poetry on the Picket Line anthology is available from http://culturematters.org.uk/index.php/shop-support/our-publications/item/2895-poetry-on-the-picket-line

We were back-to-back with Modern Poetry in Translation, who had the intrepid Sarah Hesketh and the mighty Clare Pollard on duty. I’ve been reading their Caribbean and Korean issues solidly since. US poet Chelsey Minnis was a superb headline reader. She read her unique work and took time to talk to just about everyone and made some good jokes.

Another favourite were pens proudly embossed “This machine kills fascists.” While it’s true many an enemy has picked up a pen, a pen put to good use benefits us all.

National Poetry Day came and went, as it increasingly does, quietly. Poetry should be in the hearts and imaginations of everybody and it seems that the more it is so, the less effort its guardians put in. National Poetry Day was also the day McDonald’s, Wetherspoon’s, and TGI Friday’s workers came out on strike.

Several poets from the Picket Line were there in support. John McDonnell even bought a copy of the anthology after a stirring speech in support of the strikers and recognising that precarious working and zero hours have to be addressed and stopped. Still poeting, still on the picket lines: all wi doin is defendin.