Britain must ‘come clean over its role in the Raqqa carnage,’ Amnesty International demands

A destroyed neighbourhood in Raqqa
×

BRITAIN must come clean over its role in the “carnage” in Syrian city Raqqa where US-led air strikes killed hundreds of civilians and injured thousands more, Amnesty International demands today. 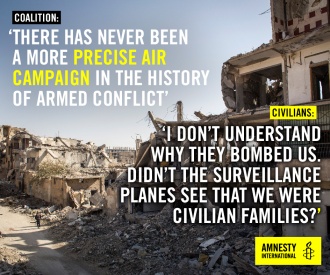 In a damning report released to mark the first anniversary of the bid to drive out Isis, Amnesty claims coalition air strikes and artillery barrages “appear either disproportionate or indiscriminate or both and as such unlawful and potential war crimes.”

Amnesty UK director Kate Allen called on Britain to “come clean over its role in this carnage.”

She said: “Civilians in Raqqa have suffered grievously at the hands of Isis, but they’ve also been imperilled by the coalition’s disproportionate aerial attacks.

“Having conducted more than 200 air strikes in Raqqa, the UK needs to be able to show that its targeting was proportionate and that it took proper measures to avoid unnecessary civilian casualties in its joint operations.”

Ms Allen said that, instead of “repeating a mantra about there being ‘no evidence’ of civilian casualties” from British air strikes, the Ministry of Defence should publish data about its Raqqa attacks, including dates, times, locations, weapons used and intended targets.

She said ministers should explain how Britain has investigated the impact of its attacks in both Raqqa and Isis-controlled Mosul in Iraq.

The report tells the story of the Badran family. Over several weeks, 39 family members were killed in four separate coalition air strikes as they moved from place to place inside the city to avoid shifting front lines.

“We thought the forces who came to evict Daesh [Isis] would know their business and would target Daesh and leave the civilians alone,” said Rasha Badran.

“By the time we had realised how dangerous it had become everywhere, it was too late. We were trapped.”

After several attempts to flee, she and her husband finally managed to escape, having lost their entire family, including their only child, a one-year-old girl named Tulip.

The MoD admitted for the first time last month that a civilian on a motorbike had been “unintentionally killed” as a result of a drone strike on March 26.

During the four-month operation, homes, buildings and much of the city and its infrastructure were “damaged beyond repair,” the report states.