AT least 70 anti-fascist organisations mobilised against the far right in the German city of Chemnitz yesterday in a display of unity after a week of anti-immigration protests.

The latest demonstration was called by the far-right Alternative fur Deutschland (AfD) which is seeking to exploit the stabbing of a Cuban-German citizen in the eastern city last Sunday. 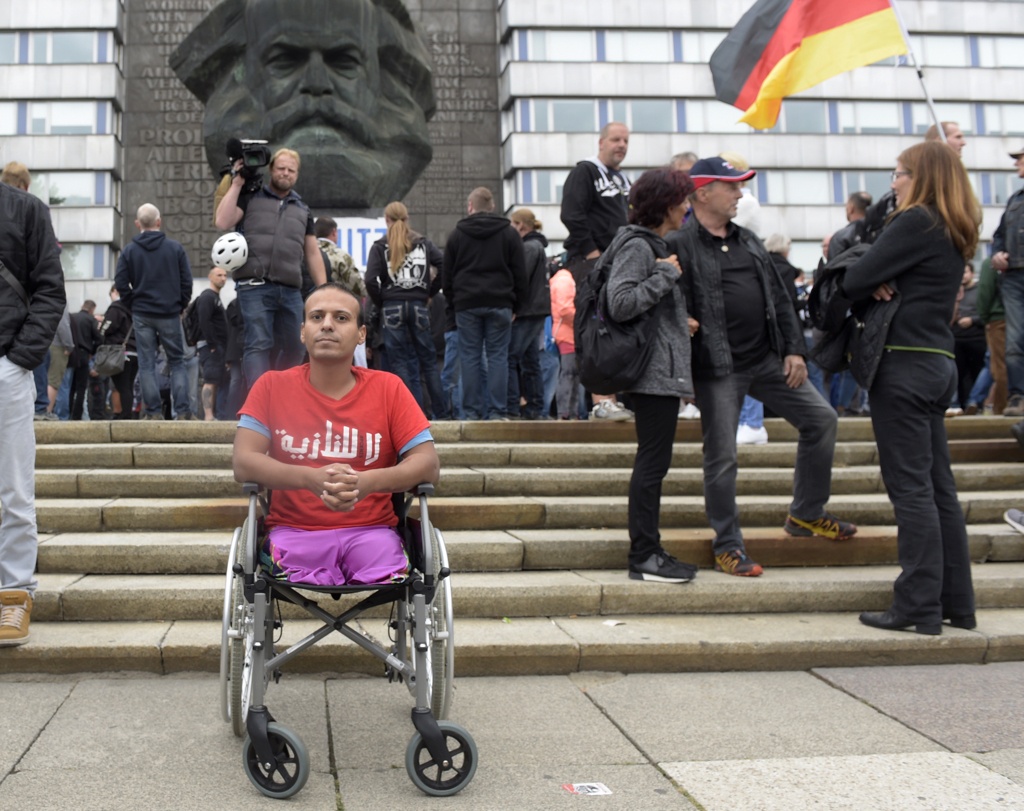 A man wears a t-shirt with the Arabic writing 'No Nazis' as he sits in a wheelchair in front of the Karl Marx statue in Chemnitz, eastern Germany, yesterday

It was joined by supporters of the anti-Islam Pegida movement, as an estimated 4,500 people descended on Chemnitz for the protest.

Party banners were prohibited while supporters held white flowers for a silent “march of mourning” in memory of those allegedly killed by migrants.

However, many of those present gave nazi salutes and chanted the nazi-era slogan “lugenpresse” — lying press — to media organisations covering the event.

A large police presence saw around 1,300 officers deployed to protect the right-wing protesters from a large anti-fascist counter-demonstration which at one point attempted to block the route of AfD march.

The anti-immigration protesters complained that the police were failing to keep them safe as the cordon was broken on a number of occasions leading to minor scuffles.

The counter-protest drew thousands of people, with many young people coming together under the slogan “Herz statt Hetze” — Heart Instead of Hatred — to show that Chemnitz is a city that welcomes migrants and opposes the hatred of the far right.

Chemnitz has become a focal point for a resurgent far right in Germany. Violence erupted at last Sunday’s demonstration as fascists clashed with left-wing counter-protesters after they took to the streets following leaked news that the two men arrested for the stabbing were from Iraq and Syria respectively.

The attacks on those believed to be immigrants which followed the demonstration led to Chancellor Angela Merkel warning that “hate in the streets” has no place in the country.

Research by German broadcaster ZDF showed that 76 per cent of the country see far-right extremism as a threat to German democracy.

An open letter which has been signed by thousands has been circulated on social media saying that the far right does not represent Germany.

“This is not your country. These are not your streets. Here, Hitler’s salute is not made and no-one is persecuted for their appearance or for their origin,” it reads.