FOUR people who blockaded a JCB site over the firm’s complicity in Israeli house demolitions are facing trial on Wednesday.

The defendants, who are part of campaign group Stop the Demolitions, will appear at Newcastle-Under-Lyme Magistrates’ Court in Staffordshire at 10am. 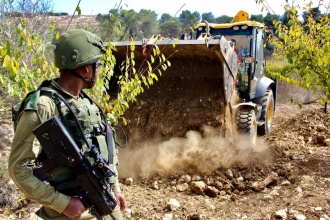 A JCB is used to raze land near Beit Omar, in the occupied West Bank

They are in court for blocking the main road to JCB’s World Logistic Centre in Stoke-on-Trent in March last year, disrupting the firm’s supply chain across the Midlands for six hours.

Police arrested them on site and later charged them for obstructing lawful business under the Trade Unions and Labour Relations Act. If convicted, they face jail terms of up to six months.

One of the defendants told the Morning Star that he wanted to target the British firm after witnessing the devastating impact of demolitions on Palestinian communities.

“Having seen demolitions and been involved with Palestinians resisting them we wanted to start a campaign which targeted JCB and raise awareness to the fact that demolitions are a key part of Israel’s colonisation of Palestinian land,” Chris, who preferred not to give his full name, explained.

During his last visit to the West Bank in 2018, Chris obstructed JCB bulldozers which were attempting to destroy the Bedouin town of Khan al-Ahmar, saying that he was “deeply affected” by the distress that the attempt caused the villagers.

“Our job is to make JCB care,” he said. “It’s to show that if they carry on refusing to stop their equipment being used in this way then we will make sure they suffer reputational damage and that their brand is conflated with home demolitions.”

Recent figures released by the Corporate Occupation research group showed that JCB bulldozers were used in demolitions during 2019 that affected almost 30,000 Palestinians — largely through the destruction of water wells.

The trial comes shortly after the UN revealed a list of companies, including JCB, that operate in Israel’s illegal settlements.

This has increased pressure on the firm, which is chaired by billionaire Tory donor Anthony Bamford, to cease its complicity in house demolitions.

A protest in solidarity with defendants will take place outside the court from 9.30am.

In response to the trial, a statement from Palestinian anti-demolitions group Good Shepherd Collective said: “The blocking of the JCB’s Global Logistics Headquarters in Stoke-on-Trent isn’t just about disrupting a corporation’s aiding and abetting of Israeli war crimes, but it is modelling the type of activism which demonstrates that freedom will not be had without risk and sacrifice.”

The Israeli army has demolished 50,000 Palestinian homes since 1967, according to the Israeli Committee Against House Demolitions.