The steelworks plant in Scunthorpe
×

BRITISH Steel must be renationalised, say Kurdish activists as they warned against the government accepting blood money from the Turkish army who are committing war crimes with jihadist terror groups in Syria.

The Kurdistan Solidarity Campaign (KSC) issued a call for the British government to step in and save the company, which faces liquidation, instead of using “the labour of British workers to line the pockets of murderers.”

It hit out at plans to sell British Steel to the investment arm of the Turkish Armed Forces Assistance Fund (Oyak), which was named as the preferred bidder by the British government today.

British-based Kurdish and Turkish organisation Gik-Der said the sale was “a reflection of the dirty relationship going on behind the scenes between Turkey and the British government.”

It warned the Turkish army is responsible for many brutal massacres both historically and today, targeting thousands of ethnic minorities.

“The Turkish army is not only a military force but also represents an important part of the capital of Turkey through its major company Oyak.

“This purchase is a clear sign of how militarised not only the Turkish government is but also the militarised direction the capital of Turkey is following,” it said in a statement.

“The message the UK government is giving to the world through this deal is clear” ‘Our doors are open to all types of dictatorship regimes as long as they bring in capital.’

KSC said the sale of British Steel to Oyak would see the company run for the “profit of Turkey’s military” which is widely linked to jihadist terror groups and the Free Syrian Army.

As reported in the Star last week, the Turkish state is accused of having extensive connections with former senior Isis figures who are heading brigades trained and run by the Turkish army in northern Syria.

Operation Olive Branch — an illegal invasion and occupation of the peaceful canton of Afrin launched last January — has been branded an operation in ethnic cleansing against the largely Kurdish population.

Allegations of war crimes have been repeatedly made, with reports of judicial executions and genocide against Kurds, with around 300,000 people displaced from the region.

In February last year Ankara was accused of using chemical weapons on civilians by the Afrin Health Council who demanded an independent investigation.

But Washington brushed aside the claims, stating “it is extremely unlikely” Turkey launched a chemical attack.

Oyak was formed in 1961 in the aftermath of Turkey’s first military coup.

Company chair Mehmet Tas is a former army general, while its former chair Yildirim Turker – a retired lieutenant general – was sentenced to life imprisonment over his involvement in the 1997 military coup.

It has a history of trade union oppression and brutally crushing strikes across a number of industries it operates in.

This includes Turkey’s Renault plant were 26 trade unionists were handed prison sentences for their involvement in a 2016 strike.

Last year trade union leader Abdullah Karacan was shot dead as he visited workers at the Goodyear tyre factory in Adapazari, in which Oyak also has a substantial share, according to the Wall Street Journal.

Kurdistan Solidarity Campaign secretary Rosa Gilbert said it was “utterly grim” that the government was selling British Steel to the Turkish army’s pension fund and called on it to be nationalised.

She told the Star: “It is utterly grim that British Steel, so long neglected by the UK government will be run for the profit of the Turkish military.

“The Turkish army, part of Nato, has regularly committed human rights abuses including the illegal 2018 invasion of Afrin.

“They get away with these abuses with the collusion and cover of the United States, United Kingdom and EU member states so it’s unsurprising but nevertheless horrifying to see the government approve of the fact that the labour of British workers will line the pockets of these murderers.

“The government should step in and save the industry like it did with the banks.”

Labour’s shadow business secretary Rebecca Long Bailey said the workers need security and urged the government to conclude the deal and “secure the future of the company and people’s jobs in Scunthorpe.”

But she said it was essential that Oyak submitted its full plans for proper scrutiny to the steel unions and works closely with them, not just the shareholders.

“Given the company’s track record, Labour will hold the government to account if there are any moves to undermine the unions and workers’ terms and conditions.”

Unite national officer for steel Harish Patel said “the overwhelming feeling of the 5,000 workers at British Steel is one of relief.”

“This dedicated and loyal workforce must not be an afterthought amidst all of the speculation,” he said. 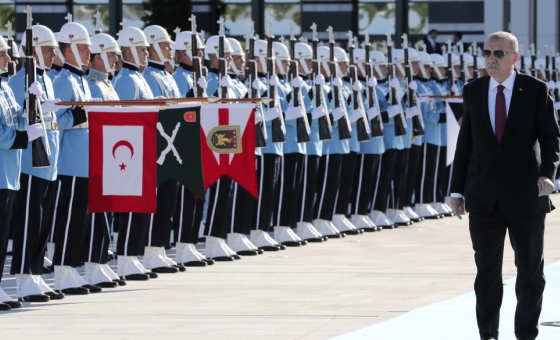