HUNDREDS of protesters gathered outside the Brazilian embassy in London today, joining others worldwide in demanding that President Jair Bolsonaro halt the destruction of the Amazon rainforest.

Fires have increased by 84 per cent on last year, mainly to make way for cattle farms and soy plantations.

Extinction Rebellion (XR) activists are calling for governments around the world to make this type of “ecocide” illegal as a record number of Amazon fires have raged for three weeks.

Environmental protester and London pub landlord Peter McCall said: “I’m scared that if we lose [the Amazon] then there won’t be any hope for our survival. And yet the Brazilian government are actively encouraging its deforestation and exploitation.”

The protest comes as Conservative International Trade Minister Conor Burns drank champagne with deforestation-supporting Brazilian Minister Marcos Troyjo while on a four-day visit to the country this week.

The “cosy” trip has sparked fury among Labour politicians, who wrote to PM Boris Johnson today to demand he pressure Mr Bolsanaro at this weekend’s G7 meetings to stop the “reckless destruction” of the Amazon.

They are also urging ministers to introduce tough new measures to stop British companies from aiding and abetting the destruction of the Amazon.

Green Party deputy leader Amelia Womack, who was at the embassy protest, said Green MEPs will block any future EU-Brazil trade deal unless Mr Bolsanaro backs down over the Amazon deforestation. 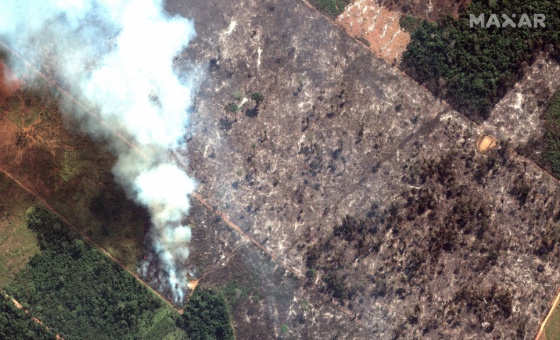 Friday 23rd Aug 2019
Editorial: It's capitalism that has set the Amazon alight
Join the 501 Club