Get ‘incompetent’ Serco out of Covid tests, say activists

Campaigners outside the Department of Health and Social Care office in London protesting over Serco's handling of the test, track and trace system
×

PROTESTERS dumped horse manure on the steps of privateer Serco’s offices today morning in protest against its “deadly incompetence” in running the Covid test and trace system. 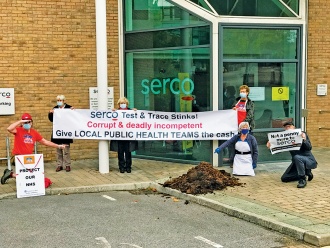 The scandal-hit firm was handed a £109 million contract earlier this year to run part of the government’s contract tracing system, but reports have revealed that it failed to reach thousands of people it was supposed to.

Campaigners say Serco and other private companies have failed to deliver the “world class system” promised by ministers and are calling for responsibility to be transferred to the NHS.

Today’s action was organised by Bristol campaigners from the Protect Our NHS Group.

Protester Mike Campbell said: “We’re taking this action in the face of the unmitigated disaster and deadly incompetence of Serco’s national track and trace system, which is causing untold misery to millions of people.

“This is a company that has, in the past, defrauded the public using public funds — and its recent track record makes it unfit to run a service so essential to protecting people's lives.”

Last year two former executives at Serco were charged with fraud and the firm fined £19.2m over a scandal involving electronic tagging.

Activist Peggy Woodward, who works as a midwife in Bristol, said she and her colleagues experiencing the impact of the pandemic first-hand had “no confidence in Serco or the government’s test and trace system.”

Serco’s contract was extended in August despite reports earlier that month the firm had only reached 54 per cent of infected people’s close contacts in 20 of the country’s worst-hit areas.

This falls far below the 80 per cent threshold required for the programme to be effective, according to recommendations by the government’s Scientific Advisory Group for Emergencies.

NHS providers have also condemned the programme as “not-fit-for-purpose.”

The firm came under fire yet again earlier this week after it was revealed that part of its work had been subcontracted to Concentrix — a US firm embroiled in a major tax credit scandal. A co-ordinated protest was also held yesterday outside the Department for Health and Social Care office in London by anti-privatisation campaigners.

Protesters from the We Own It group donned beer bottle costumes to tell ministers that “Serco couldn’t organise a piss-up in a brewery.”

“Wherever Serco goes, chaos follows. The company has shown time and again that it couldn’t organise a piss-up in a brewery.”

Mr Robinson stressed that a recent spike in cases of Covid demonstrates “just how important a functioning test, track and trace system is.”

“Unfortunately, what we have is anything but functioning,” he said.

Keep Our NHS Public co-chair and retired paediatrician Dr Tony O’Sullivan said: “Serco benefits from the government’s commitment to private wealth in place of public health, their total lack of Test and Trace experience is why it has failed utterly and is a major reason why Covid is now rapidly spreading once again, why we now see more schools and businesses closing and unemployment rising.”

Responding to the protests, a Serco spokesperson said it was incorrect to say the company runs test and trace, but it does manage about 25 per cent of the testing centres and provides half the call handlers’ contracts identified by medical contact tracers from NHS Professionals and local health authorities.

A Department of Health and Social Care spokesperson said NHS test and trace is made up of public health experts, including NHS staff, working with local authorities and private-sector partners “with the necessary skills and expertise to process over one million tests every week.”