Greece hides human rights abuses under the cover of coronavirus

While the Greek government attempts to justify the mass detention of refugees without the prospect of asylum as a response to the pandemic, human rights groups and lawyers battle to expose the truth, writes BETHANY RIELLY

Moria camp on Lesbos, where 20,000 people are crammed into a facility with a capacity of 3,500 Photo: Ahmad Rezai (ReFOCUS Media Labs photographer)
×

SINCE the Greek government suspended the right to claim asylum on March 1, all new arrivals have been rounded up, detained and taken to unpublicised facilities. Rights groups have described conditions where refugees have been detained as akin to “concentration camps,” and the newly established centres “unacceptable.”

Strict curfews on the sprawling camps on the Aegean islands have effectively imprisoned thousands in intolerable conditions with few measures in place to prevent the inevitable spread of the virus.

“There’s thousands of people who’ve arrived in Greece since March 1 who we have almost no contact with,” Lorraine Leete, a co-ordinator of advocacy group Legal Centre Lesbos tells me.

“Authorities have made a lot of effort to make these people isolated and unable to make contact with the outside world.”

Leete, who lives on the island of Lesbos, has been trying to maintain contact with refugees who arrived after the government suspended the asylum process. The authorities hoped the suspension would deter refugees from making the crossing after Turkey opened its borders.

But of course, it didn’t.

Since then, Leete says that those entering the country have been immediately detained and later transferred to one of two sites on the mainland — one near the town of Malakasa, 12 miles north of Athens and another in Serres in northern Greece.

Refugees have been detained on the side of roads, on beaches and even on naval ships. In early March, 450 people were held on a warship in the port of Mytilene in Lesbos for over a week without adequate food or clothing.

Leete, who has worked with refugees in Greece for four years, tells me that the conditions of detention for these new arrivals are “like nothing I’ve seen before. I can only describe them as concentration camps.

“People were not allowed to bathe for weeks, and were forced to sleep packed on an army ship like sardines.

“On the ship and in the two detention camps on the mainland, everyone is housed together in overcrowded areas where single men, single women, and children — some of them alone here — are all detained together.”

Human Rights Watch (HRW) says these measures violate UN guidelines on preventing gender violence, which require separate facilities. A report published by the group last week estimates that there are almost 2,000 refugees being held in “unacceptable” conditions at the two sites.

Seven hundred are believed to be in Serres, where police guard the camp at all times, forbidding people to leave except for medical emergencies.

Demonstrating the difficulty of contacting people inside, HRW said it was unable to get through to three contacts there as the site has no electricity for residents to charge their phones.

In Malakasa, HRW researchers managed to get through to four people held there, three Syrians and one Iraqi. They reported  severely limited access to water and electricity and a shortage of hygiene products, clothing and blankets at the site.

The men told them that the guards had refused to give extra blankets or clothes, even for the children, meaning parents were forced to dress their toddlers in wet clothes after washing them.

A letter by the Police Officers Association of Malakassa corroborates the inmates’ testimonies. Members who visited the camp on March 25 said the site lacked “basic hygiene, safety and coexistence regulation.”

It warned that the disregard for hygiene and safety, with the threat of Covid-19, would inevitably result in an “extremely dangerous situation,” and called for “immediate intervention before it’s too late.”

But this warning fell on deaf ears, and now it could be too late. On Sunday (April 5) a 53-year-old Afghan man held at Malakasa was taken to a hospital in Athens. The BBC reported he had tested positive for coronavirus. 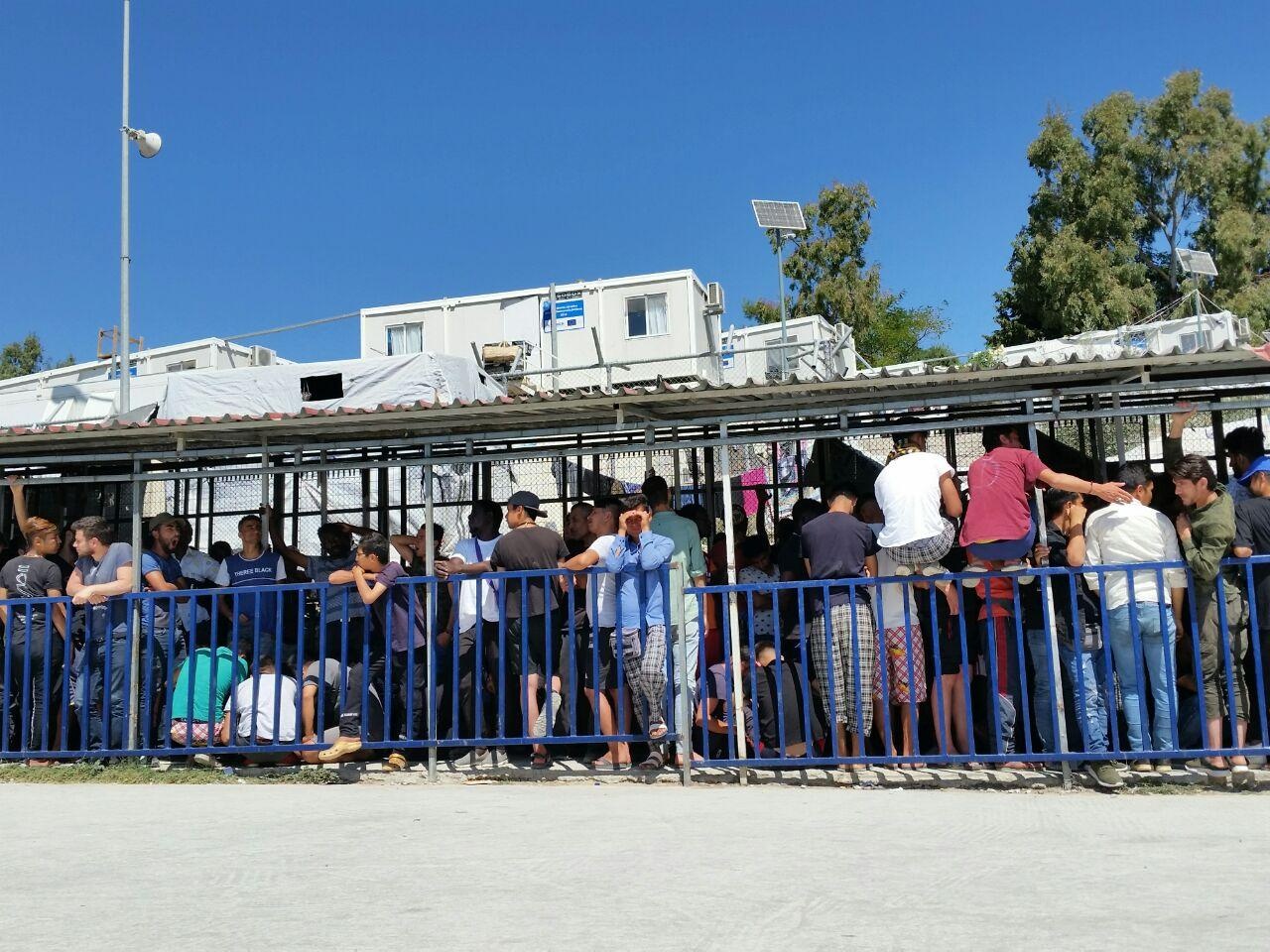 Greece using coronavirus “as an excuse” to lock up refugees

Greece’s right-wing government has been pursuing plans to establish closed detention facilities on the Aegean islands to replace the existing “open” camps since it came into office last summer. But hostility to the plans from locals and non-governmental organisations (NGOs) stalled the plans.

In mid-March government spokesman Stelios Petsas claimed that the purpose of the new centres was to prevent the spread of Covid-19 and allow for health checks.

However, rights groups strongly dispute that this was really the government’s intention.

“It’s very important to mention that the Greek state put the asylum process on hold, stripped these individuals of the right to seek asylum, already on March 1, so that seemingly has nothing to do with Covid-19,” HRW researcher Belkis Wille tells me.

Wille also points out that no measures have been taken to prevent an outbreak in the camps.

“Right now you have people being locked up and 10 people per tent with no gloves, no hand sanitiser, no masks,” she says.

“There is nothing about the conditions these people are being held in that would suggest that there is a concern for their health, hygiene and sanitation and minimising the spread or the risk of the virus.”

Instead rights groups fear the coronavirus is being used as an excuse to run roughshod over the rights of refugees, and accomplish long-term political goals: to replace open camps with closed detention centres.

These fears became even more acute on March 17, when the Greek government imposed a semi-lockdown on the open refugee camps on the Aegean islands, allegedly to stop the spread of Covid-19.

“They say they are doing this to prevent the spread of coronavirus but it seems quite disingenuous to us because they’re restricting people’s movements outside the camp but doing nothing to stop the spread within the camps or to prepare to deal with an outbreak when it comes,” Leete explains.

This is most evident in Moria camp on Lesbos where 20,000 people are crammed into a facility with a capacity of 3,500. With just one tap for every 1,900 people, even the most basic prevention measures such as washing hands is impossible. Few hygiene products have been distributed and residents are constantly forced into crowded situations to queue for food or water, making social distancing impossible.

So far there have been four positive cases on the island, and one death, all among locals. Although residents cannot leave the camp, the risk of the virus entering the site is high as camp workers are constantly going in and out without protective measures being taken.

For the thousands of refugees trapped in Moria, fear is growing by the day. “All people are worried about this virus,” a refugee who works as an interpreter with a medical NGO in Moria tells me. “Many times we have a lot of patients who have a lot of stress and depression about coronavirus.”

Douglas Herman runs a photography and film project for refugees on the island. He says his students, who live in Moria, are “terrified” because they feel that nothing is being done to protect them.

“The psychological impact of seeing nothing change on the ground is unbelievable,” he says. “I hear them constantly saying their lives don’t count, and asking: ‘How can we survive this?’”

Although the Greek government has announced plans to install isolation units in Moria, NGOs argue this is not enough. Last week 21 rights groups demanded that the EU and Greek government start evacuating the camp, laying bare the catastrophic consequences of the current measures:

“In the event of an outbreak, a quarantine that would trap tens of thousands of healthy people together with people infected by Covid-19 in the overcrowded camps, accompanied by a lack of adequate and appropriate medical preparedness and response, would almost certainly lead to preventable deaths of numerous people.”

“We cannot allow a grey zone where everything goes”

With the world’s attention focused on the coronavirus, and a “whatever it takes” approach to tackle the pandemic, there are huge fears among NGOs that these abuses against refugees will continue to go unchallenged.

But there’s also a lot of determination to expose them. “We cannot allow this to happen, we cannot confuse this and make this grey zone area where everything is allowed,” Leete says.

“The focus is at least maintaining contact with these people who are detained. At least with this information we can get these stories out.”