Lancashire leftwingers pay tribute to a ‘warrior’ of the working class

More than 100 anti-fascists, anarchists and socialists turn out for the funeral of Richard Bircumshaw (1951 to 2018)

Richard Bircumshaw is laid to rest
×

LEFTWINGERS in Lancashire paid tribute today to a “warrior” of the working-class movement.

More than 100 anti-fascists, anarchists and socialists turned out for the funeral of Richard Bircumshaw in the West Pennine Remembrance Park, Bolton. 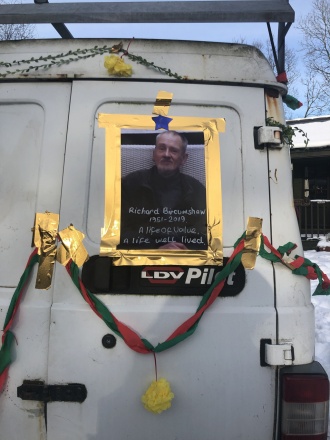 Mr Bircumshaw, who died in December at the age of 68, was a veteran figure in the Lancashire left.

After being born to a military family in Berlin in 1951, Mr Bircumshaw moved around the country before becoming politically active in the north of England.

A welder by trade, he was an active member of the militant anti-racist group Anti Fascist Action (AFA), and played a leading role in fighting the National Front, the British National Party and the English Defence League over three decades.

He was also prominent in the anti-poll tax movement in Bolton.

Mr Bircumshaw had recently thrown himself into the campaign against fracking in Lancashire, and used his trade skills to weld together steel bars that anti-fracking protesters would glue themselves to in well-publicised protests against fracking companies.

At a graveside oration, friends of Mr Bircumshaw discussed his commitment to his principles of “mutual aid, solidarity, anarchy and social equality.”

Flags inscribed with the AFA symbol headed the funeral procession, while bagpipes played around the mourners.

A wreath was also laid by comrades from the anti-fascist struggle, and messages were read out, one of which described Mr Bircumshaw as “a lovely man — and a total warrior.”