People take part in a Black Lives Matter protest rally in Manchester, in memory of George Floyd who was killed on May 25 while in police custody in the US city of Minneapolis
×

BLACK LIVES MATTER (BLM) protests continued to erupt across Britain today, with tens of thousands demanding justice for George Floyd and an end to entrenched racism.

A massive crowd gathered outside the US embassy in south London, with anti-racist protesters taking a knee and chanting: “No justice, no peace.”

Demonstrators highlighted Britain’s guilt in the repression of black and ethnic minorities, demanding the closure of immigration detention centres and holding signs reading: “The UK is not innocent.”

In Bristol, protesters pulled down the statue of 17th-century slave merchant Edward Colston and dumped it in the harbour of the former slave-trading hub. 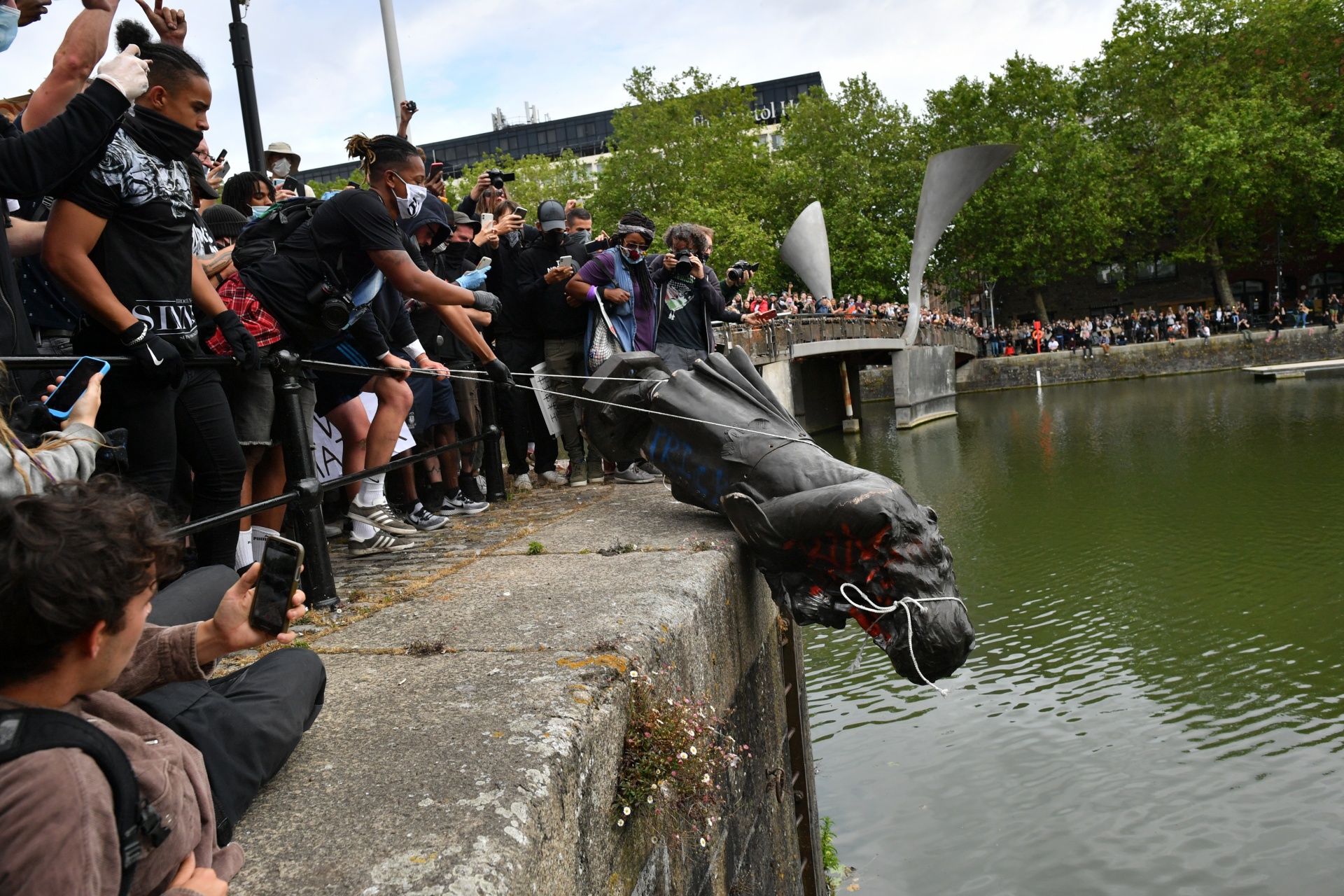 Local police said they had launched an investigation to identify the group, claiming they had “clearly committed an act of criminal damage.”

Earlier in the day, Health Secretary Matt Hancock told Sky’s Sophy Ridge that he did not think Britain was a racist country.

He claimed that the protests were “thankfully” a response to events in the US “rather than here.”

“He’s speaking out of his bumhole,” one London protester told the Morning Star.

“These issues have been going on for 400 years,” she said, holding a sign demanding “compensation for all black Britons for centuries of slavery, colonialism and discrimination.”

One person handing out the personal protective equipment told the Star: “We are all doing what we can to protest injustice, but to make sure people are safe doing it.”

In Scotland, large crowds gathered at Glasgow Green and Holyrood Park in Edinburgh, as well as elsewhere north of the border, despite warnings by senior police and government figures including First Minister Nicola Sturgeon and Justice Secretary Humza Yousaf. 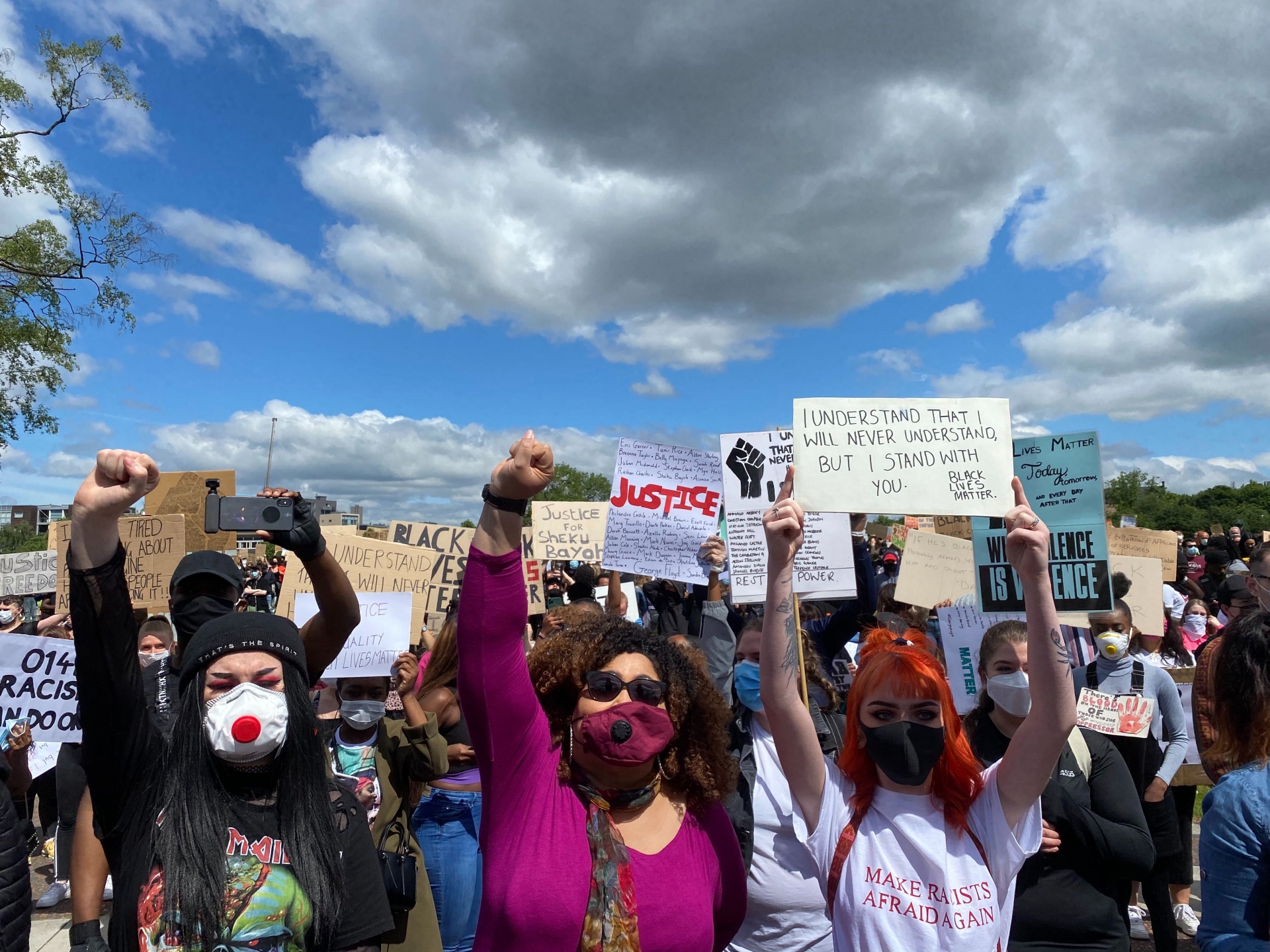 The director, who produced BBC documentary Black and Scottish, said he had suffered “disgusting” racism during his time at school in Glasgow and said he was distraught to hear his young daughter say she “wanted to be white.”

Demonstrators challenged the government to face up to the colonial past of Scotland, with one telling the crowd: “I am certain that Scotland will play its part in healing and giving back.

“This is us telling the Scottish government — if you haven’t been planning to repay us, start planning.”

The protests followed widespread demonstrations on Saturday, when crowds flocked to Parliament Square despite warnings by Metropolitan Police chief Cressida Dick that the mass gatherings are illegal during the coronavirus lockdown.

But signs with messages such as “Racism has always been a pandemic” suggested that many believed the urgency of the protests outweighed the risks.

Some groups went on to the Home Office to demand justice for the victims of the Windrush scandal.

The demonstration was largely peaceful, with organisers telling crowds: “We are not here for violence. If you commit violence today you are not for the cause.”

But some clashes broke out between some protesters and the police outside Downing Street on Saturday evening, leaving 10 officers injured and 14 people arrested.

In Manchester, about 15,000 protesters gathered at Piccadilly Gardens on Saturday, where Palestine solidarity activists held placards comparing the US and Israel as racist states. Another large protest took place in the city today.

And thousands of protesters also mobilised in Sheffield, in a protest organised on social media by a small group of young black campaigners. Only a few hundred had been expected.

And in Bradford, West Yorkshire, a socially distanced protest was staged, with public buildings in the city later bathed in the colours of the BLM movement.

In a statement, the group demanded that the British government “stand up to human rights abusers, even when they are allies or trading partners.”

“This is not just America’s problem,” it continued.

“The racism that has led to the murder of so many people of colour is pervasive; it is built in to Britain’s public institutions, it exists in our immigration system and it is written in our history books.”

The Communist Party of Britain said the “vicious” killing of Mr Floyd highlighted the racism “that still pervades developed capitalist societies and their state institutions.

“Our response must include recognising the class basis of prejudice, discrimination and racism in Britain and other imperialist countries, and urge black and white to unite in the fight against them,” the party’s Mollie Brown said.