FIRST published in 1978, Amrit Wilson's Finding a Voice reflects the discrimination, inequality and oppression faced by south Asian women in the 1970s which is still ever-present today. 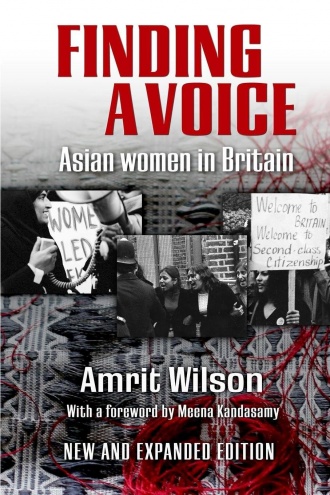 The new voices included in this expanded second edition, amazing women such as Camille Kumar, Anjum Mouj, Zlakha Ahmed and Sujata Aurora, reaffirm what Wilson set out to do in 1978 when she wrote: “Today in a very different Britain, Asian women are still resisting gendered racism and racialised patriarchies.”

They tell it as it is now — their lived experiences in a patriarchal society — and the collective sense of solidarity shines through.

For any trade unionist, the chapter on work outside the home is a must-read. It details the lived experiences of south Asian women organising within the workplace and winning the moral victory for all workers by bringing the state and other institutions with entrenched racist, class and misogynistic structures to account.

The intersectionality of being a black female trade unionist is aptly captured through the voices of Jayaben Desai, who led the Grunwick strike, and the many other south Asian women downing tools at Imperial Typewriters, Spiralynx, Trico and Electrolux, to name a few.

The new voices talk about the emergence of organised migrant workers, just like at Grunwick, who are winning struggles on behalf of all.

The chapter Reflections provides a valuable insight as to why Wilson felt it necessary to document the experiences of south Asian women through their own voices at a time when black feminism was still in its infancy, a struggle she was part of too.

She pulls no punches in explaining how the “warmth and support from her publishers had been conditional on her accepting their version of white middle-class feminism.”

It is the impact of oppression, racism and class which unifies South Asian women and the book comes at a time where we see the continued rise of the far right, misogyny, issues of class and the gig economy here and across the globe being played out in the media and perpetuated by male leaders going unchallenged by the state.

These new voices confirm how groundbreaking the book has been as a reference point for south Asian women now through listening to the voices of women from four decades ago, honouring their contribution and speaking in solidarity with them. As Wilson says in her introduction, it “reclaims our collective past as an act of resistance.”

The book is being launched at 7pm on November 2 at SOAS, Thornhaugh Street, London WC1, free admission, no booking required and at Lighthouse bookshop in Edinburgh on November 7, tickets eventbrite.co.uk