“MAD, bad and dangerous to know” — that’s what Lady Caroline Lamb said when she first clapped eyes on Lord Byron and the political Establishment and their brown-nosing media acolytes will probably splutter the same words about Bob Marshall Andrews and Martin Rowson when they take a gander at this satirical assault on the corridors of Westminster power. 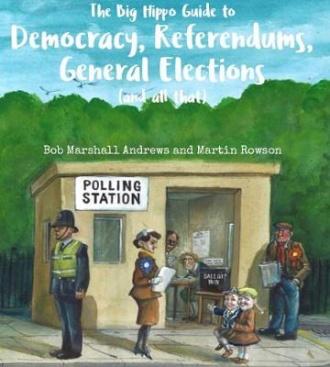 With words by Marshall Andrew, ex-Labour MP and thorn in Tony Blair’s side, and images from the incomparable Rowson, this is a guide to how British democracy works or, as this book eloquently demonstrates, doesn’t.

The Brexit referendum, the 2017 election and fake news are all covered in this gift that keeps on giving from page after hilarious page.

A book whose time has come if ever there was one, this is is an ideal present for a close political ally or, if you’re feeling malignantly philanthropic, a memento mori for one of the reactionary undead currently stabbing each other in the back as they scramble for power.

The Big Hippo Guide to Democracy, Referendums, General Elections (And All That) is published by Everything With Words, price £8.99.

NHS workers to ballot on industrial action over fair pay