Books Nietzsche and the Burbs by Lars Iyer

IN HIS book American Utopia, Fredric Jameson argues that the high-school drama is a utopian genre, depicting a world where all material needs are met and there is no need to work. 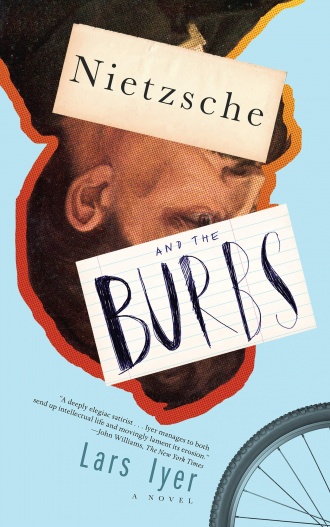 It is into this idyllic realm, with its cycle of eternal recurrence, that Lars Iyer releases Friedrich Nietzsche. He lands him in a high school in the sleepy town of Wokingham in the south east of England to preach the consolations of nihilistic philosophy.

Like Iyer's previous fiction, Nietzsche and the Burbs is a novel of ideas. But it departs from his usual university setting to a high school more recognisably rooted in our world rather than the rarefied life of the mind.

When the shy, introspective protagonist is dropped from the local private school and ends up at the nearby sixth-form college, he finds himself falling in with the misfits and losers who nickname him Nietzsche for his bleak, oracular utterances and recruit him as the vocalist for their metal band.

As they rush headlong into their final exam season, they experience the usual sex, drugs and rock and roll one expects to dabble in at the tail end of secondary school. But, rather than gazing at their future with hope and possibility, they are paralysed by the yawning nothingness that lies before them.

They channel their angst into their music, while Nietzsche takes to his blog and one wonders why he doesn't join Twitter, a medium surely perfectly suited to his aphoristic style.

Narrated in Iyer's terse but breezy prose, primarily composed of unpunctuated dialogue, there are plenty of knowing winks to the philosophically literate reader. It becomes evident that Nietzsche's life in Wokingham closely resembles his namesake's in the 19th century, with an overbearing sister and a romantic infatuation with a girl called Lou.

Besides the jocular references to the high priests of pessimism like Thomas Bernhard and EM Cioran, the levity is freighted by the gloomy lectures of Old Mole, the pupils' economics teacher, predicting the collapse of capitalism.

This is not only a critical juncture in the lives of these high-school students but for the world as it hurtles towards climate emergency, aided and abetted by a destructive economic system.

In his final project on the stultifying suburbs, Nietzsche remarks that while they seem impossible to escape, a reversal can occur, when the impossible becomes possible and an escape route opens, not to another world but to right here, where we already are.

Iyer's rollicking coming-of-age tale entertainingly demonstrates how Gramsci's old call for a pessimism of the intellect is necessary to reveal the latent utopian possibilities of our world in the here and now.