Outstanding memoir from radical US film-maker

WHEN I think about film-maker Oliver Stone, I imagine a gambler at a craps table who bets every chip he’s got, every time, and usually comes out a winner.

His recently published memoir, Chasing the Light, reads like a screenplay — Stone’s life and career have indeed been worthy of the big screen. As we learn through riveting prose, the story of the boy Oliver Stone could have been written by Charles Dickens.

Removed from the parents he adores, he is sent to boarding school and his loneliness only increases when he is told over the phone at the age of 15 that his parents are divorcing and that his mother has moved back to France without even so much as a goodbye. 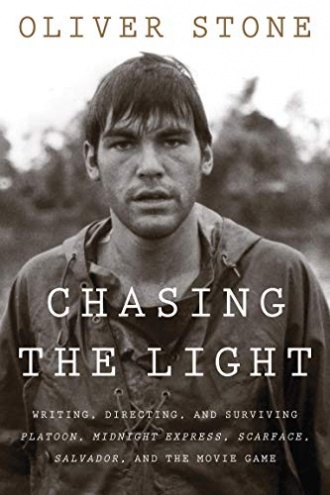 He then learns shortly after that his father has lost his fortune and, with it, Oliver’s inheritance. By his own admission, Stone has yet to fully get over this trauma.

Stone then has to begin life anew and to forge his own path, ultimately to the silver screen. It is that lonely journey we learn about in Chasing the Light.

The book opens with Stone’s recounting of his making the movie Salvador in Mexico on a shoestring budget, and the excitement of creating a film with so little backing and with such a great risk of failure excites. The results are stunning, with the director succeeding in making what I believe to be the defining Hollywood film about Reagan’s vicious war in Central America.

But, as things turned out, Stone would come to eschew certainty and comfort at every turn. He quit Yale to volunteer for the US war in Vietnam and it is this that makes Stone the stand-out individual he is.

While cowards such as George Bush and Bill Clinton would hide behind the ivy walls to avoid service, Stone went out of his way to sign up to fight. He would become a highly decorated soldier, earning a number of awards, including the Bronze Star and two Purple Hearts.

In the end, as we learn in his semi-autobiographical film Platoon, which would win the Academy Award for Best Picture,  the war in Vietnam would be a disillusioning experience for Stone.

He would learn, as so many others did, that the US was not really fighting for democracy in that far-flung country. It was instead brutalising a poor peasant society trying to shed the yoke of French, and then US, empire. What makes Platoon great, I think, is that it captures cinematically the cruelty as well as the fog of war.

Chasing the Light is a gripping read, made all the more compelling by Stone’s incredible honesty about himself as a person and his feelings — including embarrassing ones that most people would leave to the therapy couch — and about his triumphs and failures. He is an amazing human being and to learn about him in his own words, with all his humour and candour, is a delight.

Chasing the Light is published by Octopus, £26. This is an edited version of a review which first appeared in CounterPunch, https://www.counterpunch.org/2020/07/24/the-making-of-oliver-stone-the-unmaking-of-hollywood/. Dan Kovalik’s latest book is No More War: How the West Violates International Law.

NHS workers to ballot on industrial action over fair pay