Books Elections and agitation: the engine of revolutionary change

ARMED INSURRECTION: Soldiers carry a banner with the word 'Communism' in Moscow, October 1917
×

The Ballot, the Streets, or Both? From Marx and Engels to Lenin and the October Revolution
by August H Nimtz
Haymarket Books, £14.99

A MILD flutter was stirred in Establishment dovecotes when Jeremy Corbyn, in his recent New Year’s message, pledged that the Labour Party would constitute an opposition to the electorally victorious Tories both in Parliament and “on the streets.” 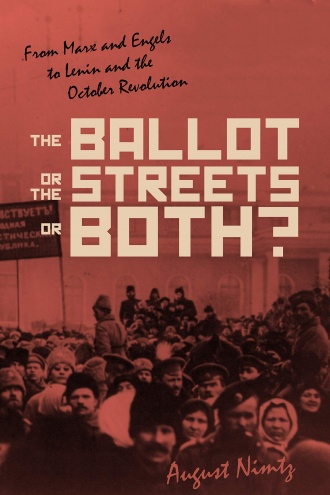 This led to the usual rebuttals, to the effect that the outgoing Labour leader was once again prioritising protest over the proper form of politics – parliamentary procedure and electoral campaigns.

In fact, the question Corbyn raised remains a deeply relevant one for socialists: what is the actual strategy for overcoming capitalism and, in particular, the right balance between parliamentary activity – including elections – and extra-parliamentary, mass agitation?

Forests have been felled for books and pamphlets addressing this issue over the last hundred years or more. In the light of Labour’s heavy defeat in December, we are surely due for some more.

The publication of this work by August Nimtz is therefore timely. Its basic mission is to summarise the approach taken by Lenin, developing Marx and Engels, towards elections and parliamentary work while leading the Bolshevik Party and how he situated this activity in his overall revolutionary strategy.

There is no doubt as to the value of the study of Lenin’s writings, since he undoubtedly had the merit of leading a successful socialist revolution. And on this issue, as on every other, his writings were informed by a stringent clarity which is a breath of fresh air in a time of waffle.

Nimtz argues, successfully in my view, that Lenin took work in the tsarist Duma very seriously and he offered detailed guidance both to the Bolsheviks’ election campaigns and to the activity of the party’s elected deputies.

This may surprise some Leninists, since Lenin is better known for the politics of armed insurrection and for his abrupt dismissal of Russia’s constituent assembly following the 1917 revolution. Yet he saw parliamentary work, even within the very narrow margins permitted by tsarism, as a vital means for rallying the working class to the party’s side, as well as finding allies among other classes.

Elsewhere, Lenin warned against “subordinating class policy to parliamentarism” rather than the other way around and, still more bluntly: “Everywhere we have a single policy: in the election fight, in the fight in the Duma, and in the fight in the streets – the policy of armed struggle.”

Clear enough. It could hardly be otherwise in a country where parliamentary institutions had shallow roots and a very limited political role. The Duma had no real control over the government and was sent packing at the Tsar’s whim.

Some of this remains relevant today. Lenin’s insistence that the party’s parliamentary group remain under the strict direction of its leadership, representing the membership as a whole, was the practice in communist parties thereafter but never in social-democratic ones, including the Labour Party. There, parliamentarians tend to reign supreme, with generally baneful consequences.

While Nimtz, a US academic and erudite and committed socialist, has performed a service in bringing together Lenin’s writings on this subject, his approach has two notable shortcomings. He does not really account for Lenin’s turn away from democratic arguments after the Bolsheviks came to power – the dispatch of the Constituent Assembly is addressed but not the wider move to increasingly authoritarian governance.

And he struggles in endeavouring to give Lenin’s approach contemporary relevance. Of course, very considerable work has been done to attempt to fashion “Leninist” strategies for revolution in advanced capitalist democracies over generations, often by parties commanding the support of millions. Yet the lack of success over a century means that the basic problem still lacks a solution.

Nimtz’s own approach is deeply compromised by his dogmatic Trotskyism here. He argues that Lenin, more than anyone, got the question of revolutionary parliamentary work right because he alone thoroughly based himself on Marx and Engels and therefore scarcely made a single error of judgement.

He then asserts that Trotsky and the movement he founded after his break with the Communist International alone carried forward Lenin’s own approach. If that is the claim for contemporary importance then it falls far short, since to measure the efficacy of Leninism by the achievements of the Trotskyist movement over the last 90 years is to assent to its irrelevance.

In fact, the problem of parliament and a “parliamentary road to socialism” or more forceful alternatives can only be worked out in the practice of those parties which are actually rooted in the class movement, in mass organisations, not sects.

Lenin has something to say to us here. But so too does the experience of the last four years of socialist leadership of a parliamentary party alongside weak or non-existent mass agitation outside.