ROLLING DOWN THE RIVER: A Thames barge
×

EXACTLY 50 years ago this month, on October 15 1970, The Cambria, the last working Thames barge trading under sail alone and captained by the singing bargeman Bob Roberts, loaded her cargo at Tilbury for the last time before being laid up. 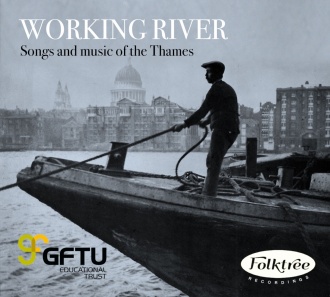 That is a good enough anniversary as any to release Working River, 21 songs about the life of working people along the river over the centuries, with three of the songs celebrating the barge trade — A Bargeman’s Year, The Last Barge and Stormy Weather, a version of which was once sung by Bob Roberts himself on his battered old melodeon.

This celebration of working life on what was once called “the hardest working river in the world” is a collaboration between the General Federation of Trade Unions Educational Trust and Folktree Recordings.

They felt that while the deeds of the rich and powerful are often celebrated on this so-called royal river, the stories of the lives of the millions of workers that toiled, played and died around it are too often being lost with the turning of each tide.

The river’s position as a major maritime route has put it at the centre of many events of national significance, leading the early trade unionist and historian John Burns to describe it as “liquid history.” As a result, the Thames runs deep in the national psyche and forms a fundamental part of our identity.

It would explain why monarchs and rulers have always sought to be associated with the Thames as a symbol of power and authority.

In his book Sacred River, Peter Ackroyd describes how Handel’s Water Music, perhaps the most famous piece of music associated with the Thames, was first performed on the river in 1717 to celebrate the first British monarch of the House of Hanover,  George I, coming to the throne.

Ackroyd muses that this loud musical display was also performed in order to drown out the “vulgar abuse of the Thames watermen and their egalitarian sentiments hallowed by tradition on the river.”

Working River seeks to rejoice in these “vulgar” voices and their “egalitarian sentiments,” because it is clear that the Thames has another history, one of toil, migration, rebellion, mutiny, smuggling, mudlarking and even snatches of simple pleasure on what is an eternally changing river.

It is not widely known that one of the most successful naval mutinies in British history took place at the mouth of the Thames on the Nore sandbank in 1797.

This significant event, which saw the flying of the red flag for the first time, terrified the admiralty and led to vast improvements in conditions. Nevertheless the “president” of the mutiny, Richard Parker, was hanged from the yardarm of HMS Sandwich.

The Death of Parker, sung by Anne Dearman, is a wonderful song celebrating him while Goldspring, written and performed by the talented MG Boulter, tells the tale of the press-ganged Goldspring Thompson who witnessed the mutiny before escaping.

There are songs like Strike for Better Wages, celebrating the Great London Dock Strike of 1889 against dreadful condition. It resulted in a victory for the 100,000 strikers and established strong trade unions among London’s hitherto unorganised workers.

What is less widely known is that the dock strike was heavily influenced by the successful Match Girls’ strike the previous year by over 1,400 young women between 12 and 20 years old. It’s celebrated in a tune collected by renowned folklorist Roy Palmer.

The subject of love is a recurring theme and local folk singer Kitti Theobald’s personal love letter to the Thames, My River, is recorded live here at a local singaround.

Essex singer Jolene’s astonishing version of Ewan McColl’s Sweet Thames Flows Softly, following the fortunes of two lovers as they journey down the river, is another stand-out track, while the group Potiphar’s Apprentices deliver The Fisherman, collected by Ralph Vaughan Williams back in 1904.

Unsurprisingly, class is a recurring theme, no more so than on the haunting The Wreck of the Princess Alice, a poem put to music by Crafting for Foes which deals with the sinking of the pleasure ship Princess Alice with the loss of 700 men, women and children in 1878.

It was the largest loss of life ever on the Thames and it is widely believed that this disaster is largely forgotten for the simple reason that all the victims were workers not worthy of remembrance.

The Hoy Shanty Crew sing of happier times with Day Trip to Southend, which describes the experiences of Londoners coming down for the day only to discover the tide was out.

Other songs deal with female smugglers, mudlarkers scavenging on the shore, desperate fishermen that row to London to sell their wares and a joyful Calypso song from the Windrush after it docked at Tilbury in 1948 to bring workers from the West Indies, written by the king of Calypso Lord Kitchener.

Suitably, the collection ends with Essex singer and writer Jack Forbes and friends belting out a live version of his classic Rolling Down the River about working the container ships along the Thames, which is now sung around the world.

An added bonus of buying this CD is that proceeds will go to the GFTU Educational Trust to support its provision of free trade union education.