Books Killing Communists in Havana: The Start of the Cold War in Latin America by Steve Cushion

THIS book complements Steve Cushion’s earlier work A Hidden History of the Cuban Revolution and is an equally well-researched and readable account. 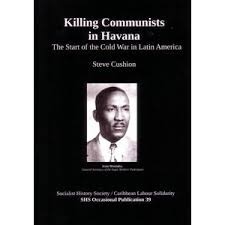 In it, Cushion has rescued key parts of Cuba’s working-class history. It has often been argued that the Cuban revolution of 1959 was the result of a socially and politically isolated group of guerilla adventurers.

Having disembarked from their boat Granma and surviving their initial decimation by dictator Fulgencio Batista’s forces, they then conducted a brilliant military campaign that brought them to power.

The author provides documentary evidence, little of which has been published in English before, showing a more complex picture.

The guerillas could never have survived their ordeals in the mountains of the Sierra Maestra or made it to Havana without considerable support from rural and urban workers.

Many of these workers and poor peasants were, or had been, members or supporters of the Partido Socialista Popular or Popular Socialist Party (PSP), the name taken in the 1940s by Cuban communists.

The original Cuban Communist Party and then the PSP had built a considerable working-class base, effectively becoming the leadership of the main Cuban trade union federation the CTC.

Cushion points out that Cuba in the 1940s had the highest percentage of unionised workers in Latin America, with a million affiliated members out of the island’s total population of six million.

The 1940 elections were considered the cleanest in Cuban history and the island’s communists had supported Batista’s run for presidency in return for guarantees of social reforms through a progressive constitution, substantial wage increases, paid holidays, pensions, an end to victimisation of strikers and the ability of the CTC to organise freely as well as the legalisation of the PSP and its press.

At this point, Batista sought and gained a democratic mandate for power rather than through military dictatorship. In any case, the communists’ policies in these years and specifically the 1941-45 period, with their close connection to the CPUSA’s current of “Browderism,” remain controversial today.

The communists had created the foundations of a mass party. But the end of the war saw the party and the labour movement under attack, which came not only from inside the country but also from the US, which had treated Cuba as a semi-colony since the Spanish-American War.

A key force was the staunchly anti-communist American Federation of Labour (AFL), while another was the mafia, including Meyer Lansk, the man known as “The mob’s accountant,” who inspired the character of Hyman Roth in The Godfather: Part 2.

Initial attempts to split the CTC failed and, as Cushion shows, the escalation of violent attacks against PSP members and prominent CTC leaders, such as head of the sugar workers’ union Jesus Menendez and dockers’ leader Aracelio Iglesias, as well as rank-and-file militants, followed swiftly.

The combination of open involvement by military and police with covert death squads against the left and the labour movement became a feature of the cold war in Latin America and continues today.

Yet, as Cushion points out, despite the repression which temporarily drove much of the Cuban left underground, new leaders emerged in clandestinity.

Creating new structures and new committees, they ensured that when Batista was eventually overthrown in 1959, working-class networks of resistance were deeply entrenched.

Published by Socialist History Society/Caribbean Labour Solidarity and available from socialisthistorysociety.co.uk or shop.cuba-solidarity.org.uk for £5, including postage.

British racing on the brink without crowds