ANOTHER month, another Alain Badiou publication.

While this is an exaggeration, it’s true that English translations of the philosopher’s works are turning into something of a flood. 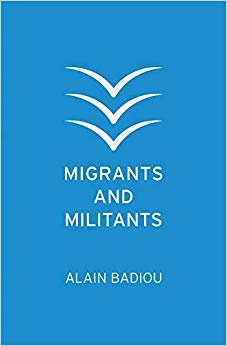 That said, as the numbers of Badiou’s available works expand, so their length contracts. The same might be said of the originality of their content as well.

Migrants and Militants is in effect a pamphlet that reprises a constant theme of Badiou’s recent output – the revolutionary potential of the “international proletariat in France.”

It is certainly given a particular vibrancy in this case as the author is writing against the backdrop of the gilets jaunes movement – one which Badiou over-simplistically considers as essentially reactionary.

“We thus have a confrontation between global modernity ... and the archaism of an understandable nationwide reaction,” he declares.

For Badiou, the anti-Macron street protests are limited in their usefulness. The recent victories of the French trade union protests against reductions in pension rights would suggest that Badiou’s blind spot – an analytical cataract – about the real existing organised working class has only got larger with age.

To be fair, his basic premise is very much guided by Marx’s aphorism that “proletarians have no homeland” and he illustrates this with a short history of the foreigner experience in post-war France, from being described as “workers” and welcomed to boost industrial growth to being dismissed as threatening “migrants.”

Using extensive extracts from the Communist Manifesto itself and drawing on the wisdom within a range of songs and poems, including the magnificent Look at Them by Laurent Gaude, Badiou captures the essence of capitalist machinery as it extracts maximum value from the world’s most vulnerable.

The author rejects relying solely on an ethical response based on open-ended hospitality as not being dialectical enough. Instead, the real urgency is for all nomadic proletarians “to organise ourselves with him or her ... if possible at an international level, to prepare the end of the oligarchic world order.”

Aside from exemplifying the itinerant working-class poets of modern-day China, Badiou offers nothing close to a practical programme as to how this might happen.

His book is stirring if somewhat vapid stuff, the philosophical equivalent of belting out Do You Hear The People Sing?

Is Badiou capable of more than this in next month’s pamphlet? Hope so.