Book Review Taken for a ride

INTRIGUED by the news of the first Deliveroo workers’ strikes in 2016, Callum Cant decided to conduct a “workers’ inquiry” by signing up to be a cycle courier for the increasingly popular food platform.

Riding for Deliveroo describes his experiences over the course of eight months, taking in the nature of the work, the ruthless and sophisticated methods of exploitation and the workers’ response to it. 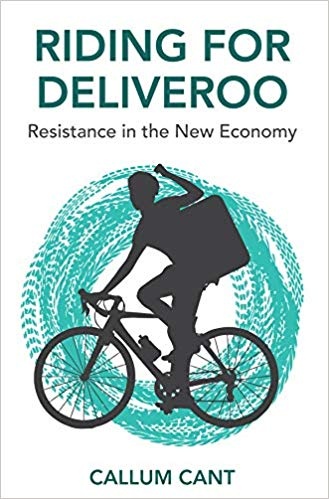 Cant describes how Deliveroo is constantly tweaking its process so as to ensure its wage bill is as low as possible. When it starts up in a given city, it will typically offer a reasonable hourly rate in order to attract couriers. Then, once it has a surplus labour force, it will move to a per-delivery piece-work system in order to intensify the work in busy periods and reduce costs in quiet ones.

The result for the couriers is predictably awful. In a quiet shift they are liable to earn well below the minimum wage and when busy they’re strongly incentivised to take risks on the road in order to make more deliveries and maximise earnings. Taking full advantage of a busy period might well be the difference between paying or not paying the bills.

If a rider has an accident —  and many have done — Deliveroo takes no responsibility whatsoever, because its couriers are “independent contractors,” a fiction that workers and unions have been fighting hard to put a stop to.

This status means that Deliveroo, and other companies in the so-called gig economy, can have cheap labour without having to pay national insurance, sick pay, holiday pay or parental leave and without having to accept trade union representation. As the author notes: “Almost the entire handbook of employment law goes out the window when employment does.”

Cant discusses how modern neoliberalism and austerity have given a boost to companies like Deliveroo by providing a large labour force with very little bargaining power. In 2010, the coalition government took away the Education Maintenance Allowance, which provided a £30-per-week grant to college students and school pupils from low-income families.

The Blair government abolished student grants and introduced tuition fees, which have now reached over £9,000 per year. These attacks have helped to create a large, young, disposable pool of workers desperate for an income.

And of course the housing market plays its role. The phasing out of social housing and the barely regulated private rental market mean that many full-time workers find themselves having to work evenings and weekends in the gig economy in order to make ends meet.

Cant describes how food-platform workers are able to find ways to organise themselves in spite of the highly individualised nature of the work and the apparent power mismatch in the class struggle with a filthy rich and well-connected company like Deliveroo.

Meeting up in public spaces while waiting for orders, couriers typically get to know one another and set up WhatsApp groups that provide a means of discussing conditions and co-ordinating action. Even a relatively small strike by food-platform couriers can have a disproportionate impact — if a hundred Deliveroo couriers in a particular area suddenly refuse to pick up orders, the service collapses.

Angry customers don’t get their food, meals stack up in boxes in restaurants and Deliveroo has to foot the bill and suffer the blow to its reputation.

These methods of worker organisation and struggle, which have arisen in response to parallel developments in the organisation of capital, are blazing a trail for millions around the world in precarious, casualised work. New unions such as the Independent Workers’ Union of Great Britain are leading the way in terms of providing structure and legal support.

The Labour left has come down on the side of these workers. In an address to strikers during the national courier strike called by the International Workers of the World Couriers Network late last year, shadow chancellor John McDonnell said: “The message to every exploitative employer in this country is that we’re coming for you.

“We’re not tolerating low pay, insecurity or lack of respect. We will mobilise as one movement, the labour and trade union movement, in solidarity. And I guarantee you this: with strength, determination, courage and solidarity, we will win."

Some of the most exploited and precarious workers are currently, in Cant’s words, “leading a struggle against immiseration at the leading edge of capitalist development.”

They are predominantly young and many are migrants. Individually they lack power but, united and organised, they can take on the system.

Profit before people: how pandemic restrictions ended in the 19th century