BOOKS Welcome migration from the margins

ACTING AGAINST EXCLUSION: Protest rally in Pamplona, Spain, against the shutdown of borders for immigrants, 2018 Photo: Ekinklik
×

UNPRECEDENTED numbers of people globally are in a state of migration due to war, growing economic inequalities or environmental degradation. 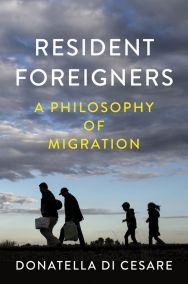 Yet, falling back back on “blood and soil” identities that exclude the so-called foreigner, the reaction to many of these exoduses, especially in Europe and the US, has been utterly negative.

Thus Donatella Di Cesare’s book is, for the most part, timely and welcome. Her basic premise is a rewriting of Karl Marx’s famous quote from his Theses on Feuerbach; as this professor of theoretical philosophy declares: “The philosophers have totally failed to develop a philosophy of migration in various ways. The point, however, is now to develop one.”

In persuasively demonstrating that the persistent failure of Western liberal philosophy to grapple with this imperative beyond either the most abstract theorising or the orientalist tendency to fetishise the “other,” she recognises that any discussion on migration is a debate about the role of the capitalist state.

The exemptions she cites, from Immanuel Kant to Hannah Arendt, are few and far between, although in part this reflects her own blindsiding of Marxist thinkers, not least Marx himself and his helpful starting point that “proletarians have no homeland.”

Yet, aside from one brief reference, she ignores the work of Alain Badiou, the one contemporary philosopher who has most publicly attempted to move the migrant from being the primary victim of capitalism to the catalyst of its overthrow.

Instead, she zeroes in on the genesis of the liberal contradiction on the issue: the concept of the rights of “man” and the citizen, as articulated from the French revolution onwards.

In essence, she contends, this results in those who are not citizens or who cannot prove their citizenship of a particular sovereign entity over a particular piece of land being unable to enjoy the resulting benefits.

This correlation has resulted in the steady erosion and currently the outright vilification of the more ancient concept of hospitality, to the point that those offering humanitarian help to the stateless are liable to prosecution.

Di Cesare’s approach is to offer a philosophy that puts migrants — sundered from the rootedness of any people with a particular piece of land — at the centre and not at the margins of philosophical debate.

In examining both the span of historical migration movements and the conditional rights accorded to citizens under capitalism, she recognises that fundamentally we have all been, at one time, foreigners in relation to the land.

Each of us is merely a resident foreigner who “evokes the immemorial exile of each person, reminding herself and others that, on this inappropriable, inalienable Earth, all are temporary guests and tenants.”

It is that horizontal relationship that challenges the dominant state-centric order of the world.

While this in itself cannot be considered as a complete philosophy of migration, Di Cesare has more clearly even than Badiou set out the co-ordinates for future extended investigation.

In this accessible and lively work, Di Cesare writes with knowledge and passion on one of the key systemic contradictions of capitalism.