A passion for bikes, politics and international solidarity

A remarkable cycling team will be setting off from Yorkshire for Germany this week to raise funds for the people’s paper. PETER LAZENBY reports

YOU have to be fit to be a member of the Pedal4Progress cycling team.

These are cyclists with a mission. In the past they’ve cycled from London to Paris for the L’Humanite festival — that’s a political and music gathering organised by the French Communist Party newspaper which attracts a million celebrants. 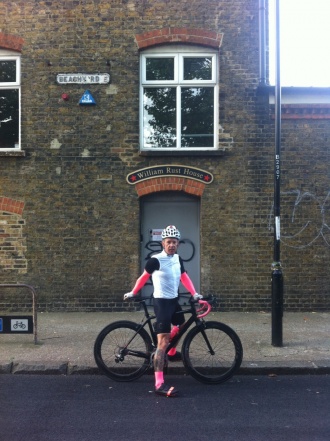 Les Doherty poses with his bike outside the Morning Star's office

They’ve cycled from Prague to Berlin to revive a historic “Peace Race” which originally took place at the height of the cold war. They’ve cycled up hill and down dale across most of England.

Most of their marathons are staged to raise funds for the Morning Star.

On Wednesday September 5, they will set off from the National Coalmining Museum of England, which is at Caphouse colliery outside Wakefield, in what used to be the heart of the Yorkshire coalfield, and they’re heading for Dortmund in Germany.

They’ll be taking with them a miner’s lamp. Having set off from England’s mining museum they’ll be visiting Germany’s museum of mining in Dortmund and presenting the lamp as a gesture of solidarity between British and German miners.

The mission will be the group’s sixth cycling marathon, driven by political passion, love of the Morning Star and commitment to international solidarity.

The main organiser of the group is Les Doherty who, as we say up here in Yorkshire, is as fit as a butcher’s dog.

They call these annual events “editions,” and Doherty says this is their “sixth edition.”

Doherty explains: “Pedal4Progress is a loose collective of Morning Star readers and supporters led by some Communist Party members in Manchester, Merseyside and London who have captured the surge in cycling’s popularity in Britain to principally help raise funds and circulation figures for the Morning Star — Britain’s only daily newspaper of the left.

“In addition to the Morning Star, the group has also helped raise money for other progressive organisations and worthy causes through the annual cycling challenge, including the Working Class Movement Library in Salford. 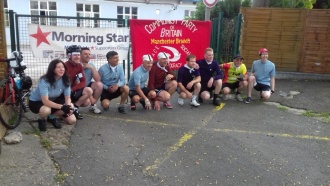 “So why cycling?” Doherty asks. “’Socialism can only arrive by bicycle,’ said Jose Viera-Gallo, and the British communist movement has a long association with this machine, including its own Spartacus Cycling Club during the 1930s, which was active in working-class areas.

“The recent successes of Team Sky and British-based riders in the pro-peloton have seen huge increases in cycling. From increased numbers of weekend warriors involved in cycling clubs up and down the country to the more casual rider, cycling has become a fast growing mass participation sport.

“It is with this in mind that Pedal4Progess seeks to take our Marxist outlook into life’s peloton and involve cycling enthusiasts in shaping the working-class response to the crisis of capitalism.

“We understand that while socialism can arrive by bike, it can also depart by guns and tanks, and the gains made by workers and their organisations need to be protected and advanced in the cause of the labour movement.

“We believe the Morning Star remains an effective driver for this challenge in Britain and through our cycling challenges intend to make sure they have the resources to continue in that role.”

The team did its “first edition” fundraiser in 2013 by riding from Whitehaven in the north-west of England to Tynemouth in the north-east.

It was a 240km (180 mile) coast-to-coast ride which Doherty describes as “casual and inclusive.” (I’m out of breath just thinking about it.)

In 2014 the team set out from the Morning Star’s William Rust House headquarters in London on a four-day 425km ride to Paris and the annual fete L’Humanite.

“Not only did we help raise the paper’s profile and finances, we also delivered a special French-English edition of the paper which was distributed free to festival-goers,” says Doherty.

In 2015 they pedalled for two days from Liverpool to Durham for the annual Durham Miners’ Gala. Their ride for the Working Class Movement Library in Salford was a mere 80km.

Further rides included marathons to support the work of the Connelly Association to mark the centenary year of the Easter Rising in Dublin, a “challenging” 120km ride into the Pennine hills of Yorkshire hills to visit and raise money for the last remaining socialist Clarion House club in Britain, which has provided a welcome rest to walkers and cyclists for over 100 years.

There have been more marathons, including one to the Tolpuddle Martyrs Festival.

Wherever the team goes, at home or abroad, its cyclists are warmly welcomed by socialists, communists, trade unionists and peace campaigners.

On the revived “Peace Race” between Prague and Berlin last year, they were joined by riders from the German Communist Party.

“We saw comrades and friends join us in Berlin for the celebrations and again helped raise the profile and vital funds that keep the Morning Star in circulation but also stepped up our political activities by reaching out to the Morning Star’s sister papers,” says Doherty.

“We carried a simple message: ‘No to Nato, Yes to peace.’ And just as those former Peace Race teams did, we rode together to promote peace and socialism.”

And so to the cycling marathon which starts at the mining museum in Yorkshire on Wednesday September 5.

Pedal4Progress hopes to see the permanent re-establishment of the Cold War Peace Race on an international basis. They’ll be involved with progressive people and groups in Germany negotiating how that might happen.

There’s one other angle to the group’s activities, involving the arts.
Doherty says: “A key element to the success of the collective’s work has not just been the nature of each challenge but the striking artwork and exclusive designs which have accompanied each challenge.

“With a nod to cycling’s heyday and to the bold constructivist visionaries’ posters, T-shirts, postcards — they all help draw attention to our outlook, to the Morning Star and to our goal of rebuilding the former Peace Race as the premier sporting challenge of the international left.”

The team will be sending regular reports to the Morning Star as they pedal their way from Yorkshire to Dortmund from September 5 to 7.