Editorial: It's capitalism that has set the Amazon alight

FRENCH and Irish threats to block the EU-Mercosur trade deal unless Brazil takes action on accelerating deforestation demonstrate the power of protest to deliver positive change.

President Emmanuel Macron might sniff that Brazil’s Jair Bolsonaro lied to him at the G20 in June, when he apparently expressed concerns for the environment.

If so, Macron is easily hoodwinked. That Bolsonaro’s government would be an environmental disaster has been obvious since before it came to power.

This is a man who revels in the name “the tropical Trump,” taking his inspiration from the world’s most powerful climate change denier; who has transferred decisions on the demarcation of indigenous lands from the National Indigenous Affairs Ministry to the agribusiness-dominated Ministry of Agriculture; who appointed a man who claims climate change is a Marxist plot to empower China as foreign minister.

Even from a president with a better record, the idea that a few verbal commitments would neutralise the threat posed to the environment by the EU-Mercosur deal is untenable. A treaty known informally as the “cows for cars” agreement was condemned by environmental campaigners as soon as its terms were known.

As eco-activist group Fern’s Perrine Fournier said when it was signed: “This trade deal is a double whammy for the planet: it will exacerbate deforestation and encourage the production of big, dirty cars.”

Well before his victory in a travesty of an election in which the frontrunner, socialist former president Luiz Inacio Lula da Silva, was barred from standing and thrown into jail on charges so flimsy they have provoked international derision, Bolsonaro had sought to exploit resentment of wealthy Westerners whose environmental protection fad was denying Brazilians the right to develop their own land.

His response to Macron’s criticisms this week is in that vein, saying his French counterpart has a “colonial mindset.”

But for all his nationalist rhetoric, Bolsonaro’s economic programme represents a step back towards semi-colonial servitude when compared with that of Workers Party leaders Lula and Dilma Rousseff, whose stress on co-operation between global South countries to resist exploitation by the main capitalist powers gave Brazil a genuinely independent foreign policy.

One that contrasts to today’s fawning on Washington and connivance at US attempts to break other Latin American countries such as Venezuela which refuse to bend the knee.

If deforestation is being driven by the home-grown agribusiness industry, the so-called “ruralistas,” these Brazilian suppliers are at the bottom of the global food chain. Tearing up regulations to facilitate the supply of raw materials to Western corporations recreates the colonial relationship.

This does not mean that Macron or Irish Taoiseach Leo Varadkar should be congratulated on their belated panic over images of the Brazilian rainforest in flames. Growing climate protest by people who have woken up to the scale of the threat is forcing politicians to act.

Macron’s fear for the planet didn’t trouble his conscience when “liberalising” the French transport system to remove restrictions on unnecessary duplication of routes by multiple companies as part of bids to deregulate and privatise the railway system.

The Amazon on fire may be more eyecatching than a green light for privateer coach travel but, like the EU-Mercosur deal itself, Macron’s transport deregulation points to a deeper problem.

The rallies demanding “system change not climate change” have grasped something the French president has not: a world economy driven by capitalism’s constant need to maximise profit is behind the unsustainable assault on the planet’s natural resources.

Treaties and institutions promoting the “free market” rights of corporations and impeding the democratic rights of peoples to stand in their way will only accelerate the destruction of the environment, even if they include supposed safeguards. This applies to the EU itself, not just the agreements it signs with other trading blocs or nations. 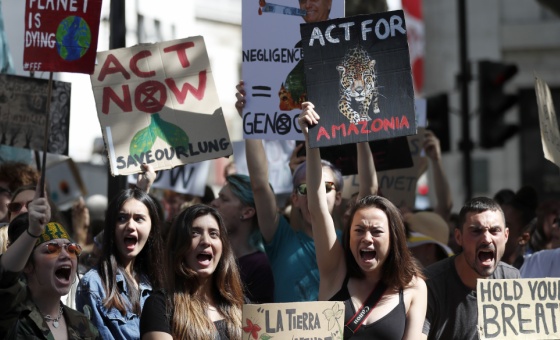