PETER FROST is under orders to return to ice cream, climate breakdown, disaster and catastrophe

I HAD hardly filed my last Friday’s Ramblings last Thursday when I heard some great news from the ice cream industry.

Ben & Jerry’s weren’t mentioned in my original article. They may make some interesting flavours, but they were recently taken over by washing powder and chemicals food giant Unilever.

The news was that B&J’s had said it would stop selling its ice cream in Israeli settlements in the occupied West Bank and East Jerusalem.

The company said sales “in the Occupied Palestinian Territory (OPT)” were “inconsistent with our values.” The firm makes ice cream in Israel.

B&J’s has a long track record of campaigning on social issues such as LGBTQ+ rights and climate change.

In a statement shared to its Twitter and Instagram pages, B&J’s said its decision reflected the concerns of its “fans and trusted partners.”

At almost the same time B&J’s had a pop at Home Secretary Priti Patel over her cruel, racist and unfeeling attitude to the many tiny and risky boat crossings bringing migrants from France to Britain. 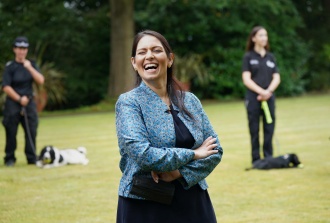 In a series of tweets the official B&J’s UK Twitter account posted several tweets tagging the Home Secretary, which began: “Hey @PritiPatel, we think the real crisis is our lack of humanity for people fleeing war, climate change and torture.”

It added: “People wouldn’t make dangerous journeys if they had any other choice.” The account also tweeted: “People cannot be illegal.”

Patel and her team responded with a serious and deeply considered analytical and political response. The Home Secretary herself in her usual supercilious way screamed: “Ben and Jerry’s ice cream is overpriced junk food.” 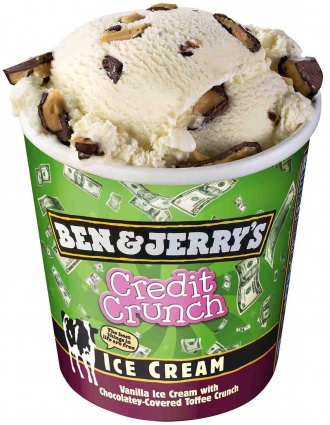 “Take that B&J!” I’m sure the international ice cream giant will be trembling with fear at such a well-thought-out analytical response.

It won’t dare to criticise Patel and the Tory government and their stance on cross-channel migrant crossings ever again.

More than 4,000 people have made the perilous cross-channel journey successfully this summer in a fleet of cheap, ill-prepared and overloaded inflatable, sometimes toy, boats.

Some are the kind of inflatable playthings that cost just a few euros in bucket and spade shops.

Now Patel has turned the might of the British army and navy on this pathetic cross-channel inflatable flotilla.

She has demanded defence chiefs make the already dangerous crossings in these small boats totally unviable.

So just who exactly are these Ben and Jerry who seem to be making good use of their ice-cream-based fame and wealth to take on both Patel and the Israeli government’s racist policies and actions.

Ben Cohen and Jerry Greenfield set up the company in 1978. They were two Jewish lefties.

They moved to Vermont, where both took a correspondence course on making ice cream and then set up in business making it in a disused petrol station. 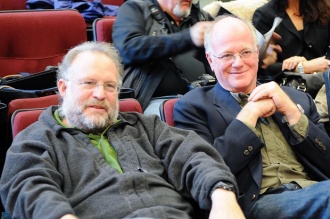 Cohen has a rare eating condition called anosmia — a lack of a sense of smell — and so relies on texture to provide variety in his diet.

This led him to develop ice cream with interesting textures like chunks of fudge or cookie dough mixed into the usual soft ice cream.

Cohen and Greenfield also sold the ice cream in large tubs and, once a year gave a free ice cream cone to anyone who asked for one.

The pair have a very long history of supporting some good and deserving causes. They also used some excruciating puns, often on existing ice cream brand and flavours.

The company was often described as a kind of corporate hippie, wearing its convictions on its labels.

Political actions by the ice cream giant included supporting the Black Lives Matter campaign, encouraging their customers to tackle “systemic and institutionalised racism” and declaring: “All lives do matter. But all lives will not matter until black lives matter.”

In 2016, Greenfield and Cohen were both arrested at a Democracy Awakening demonstration in Washington.

B&J’s pulled all US advertising on Facebook as part of the collective Stop Hate for Profit campaign, urging the social network to impose stricter measures against hate speech.

Over the years, B&J’s has campaigned for causes the environment, criminal justice reform and same-sex marriage.

It also supported the Occupy Wall Street movement against economic inequality and the undue influence of corporations on government.

In 2015, its long-running campaign to fight climate change, including the launch of a flavour called Save Our Swirled.

In 2018, it unveiled an anti-Trump flavour, Pecan Resist, parodying the slogan “We can Resist.”

The firm’s interesting flavours and novel packaging and its progressive political attitudes led to real popularity and success.

By 1985 they had created the Ben & Jerry’s Foundation. Cohen endowed it with over £600,000 worth of his shares, and the company agreed to contribute 7.5 per cent of its pre-tax profits to progressive causes.

Between 1985 and 2000 ice cream sales and the resulting financial success came and went but in April 2000, B&J’s board somewhat reluctantly announced that it was selling the company to multimillion-dollar soap powder and chemical food producer Unilever for something like £250 million.

After more than 20 years as an independent enterprise, B&J’s became a wholly owned subsidiary of multinational, multimillion Unilever, however, Greenfield and Cohen made sure the sale agreement contained provisions to allow the ice cream maker to maintain their progressive political policies and actions.

Although Unilever controlled the financial and operational aspects of B&J’s, the subsidiary secured its own independent board of directors to help provide political and social leadership to maintain the brand’s generally left-wing positions.

The new board included Cohen and Greenfield, and it would be B&J’s board members, not Unilever, who would appoint their successors.

At the moment Unilever is trying very hard to deny the B&J’s brand’s position on Israel’s occupation of Palestinian territories, Patel’s racist anti-immigration policies, climate change and many other progressive policies, but with little success.

What of the heat-wave that set your news-hound Frosty on the ice cream trail?

When I met with my daughter-in-law Jane and granddaughter Lizzie a day or so ago to celebrate the news that Lizzie had just got her first class honours degree in Chinese and international relations, I wasn’t expecting the pair of them to have a pop at me about my Ramblings column.

They both took me to task. “Don’t keep calling it climate change in your articles,” they told me. “Call it out for what it really is. What we are seeing now should be called, climate disaster, climate breakdown, climate catastrophe and climate emergency.” 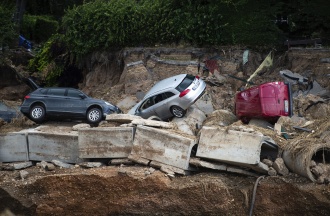 Damage caused by flooding in Germany

What with flooding in London, the rest of Britain and much of Europe; hailstones big enough to dent car roofs; mudslides and landslips caused by unprecedented rainfall levels killing hundreds in China and India; forest fires in the US and Canada burning not just trees but whole towns to the ground, I can see they are right. We clearly have a climate emergency.

With all this and a lot more I shall be altering my vocabulary in line with those orders from above.

Meanwhile, I’m trying to avoid getting too depressed about climate breakdown by eating a small, but delicious ice cream sundae sitting under my garden umbrella in a powerful and dramatic thunderstorm with heavy monsoon rain.

The ice cream does help, but only a bit.

China, Russia and Nato accuses each other of destabilising the world

The Proud Boys and The Base are terrorist organisations, New Zealand's government declares