The social media giant seems unable to enforce its own rules when it comes to far-right, white supremacist material, writes LUCY WOOD

JUST days after an appalling attack targeting Muslim people in New Zealand a user on Facebook amongst many celebrated the gunman’s actions. A discovery on Facebook showed a profile that was using a screenshot of the live video broadcast via social media as his profile picture, adding the words, “We must become wolves again and make ourselves known as such.”

The massacre which saw 49 people killed had many people pointing the blame at social media but with the tabloid press spending several years now demonising Muslims and refugees, along with a number of politicians making racist comments and right-wing activists receiving unchallenged airtime, it is not fair to lay the blame on one doorstep. 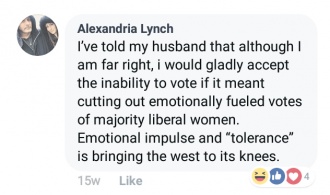 However, it is fair to say that Facebook are not doing enough to curb extremist views on their website. Only two weeks ago evidence of hate speech towards Muslims and politicians, taken from a Facebook group page was published resulting in 14 Conservative members receiving suspensions.

This week Facebook failed to ban an account with extreme views, offensive pictures and comments. The US account holder named Andrew Biroski used a picture of the New Zealand gunman holding his gun as he approached a mosque which Facebook agreed was offensive and removed from the site. 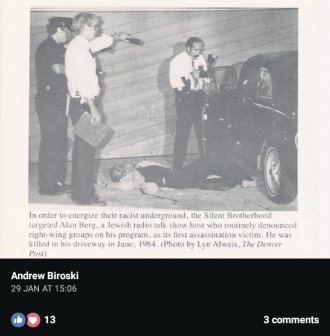 However, they left two other instances of the picture on his timeline amongst other offensive pictures. Looking at his page and exploring the accounts of those that interacted with his page was like going down a dark rabbit hole. Realising there our people that celebrate the deaths of innocents based purely on their skin colour or religious beliefs is utterly soul destroying.

The man had also used a photo, which gave an alternative definition of racist: “A proud and honourable white person who fights for his race.”

This is just one person with unsavoury views but he is a US resident with access to guns, glorifying a massacre in New Zealand and advocating that white people become hunters. Despite multiple reports, his page and most of its offensive content remains intact. From the first report this account should have been taken offline, the account holder banned and the police in his area notified of his support for a terrorist.

Facebook community standards say that it “prohibits people from promoting or publicising violent crime, theft and/or fraud because we do not want to condone this activity and because there is a risk of copycat behaviour. We also do not allow people to depict criminal activity or admit to crimes that they or their associates have committed. We do, however, allow people to debate or advocate for the legality of criminal activities, as well as address them in a rhetorical or satirical way.”

However, this has not been carried out and a simple search shows that the buck doesn’t stop with this one account. Following not just the people that interact with him but the groups he follows, you find an array of people that have the same views, including nazi propaganda against the Jews and applauding the killing of a Jewish radio presenter  or the treatment of Jews by nazis in the late 1930s. 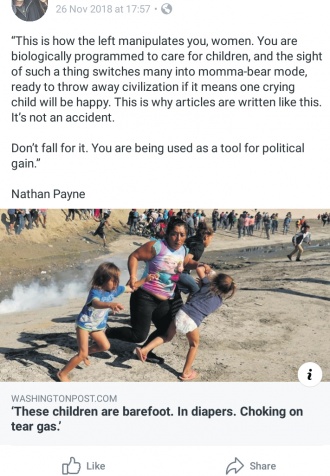 An admin of the group followed by Andrew Biroski, Edgar Baseman posts extreme right-wing propaganda, which encourages hatred of immigrants.

A Washington post article, which depicts a mother with two young children running away from tear gas at the US border, had comments that would sicken most people and have remained on Facebook for anyone to see for 15 weeks.

Comments that blame women for the prevalence of the left and support the loss of voting rights go side by side with suggestions that they should have used bullets instead and not one person speaks out. 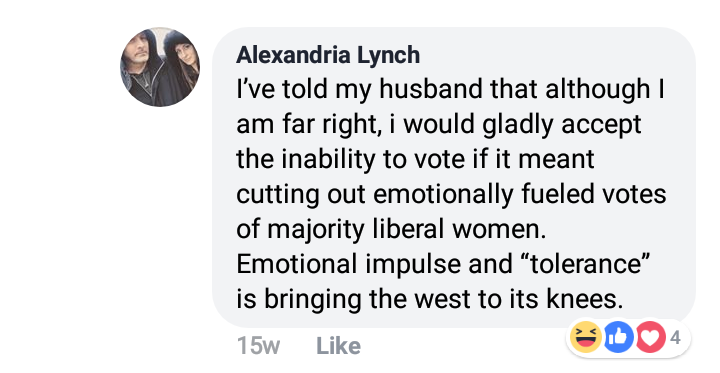 The fact that these dangerous thoughts can be so openly shared on Facebook without anyone stating how terribly wrong they are is perhaps why people like the New Zealand gunman think they are right to do what they are doing?

A group called “The Beauty of Whiteness” is another offender for brewing hatred on Facebook and despite the efforts of people reporting the page to Facebook for over a week, the page remains live.
The page has a lengthy description explaining that “multiculturalism has failed” and calls for “uniquely white homelands.”

One post insinuates that you can either be “a woke ethnonationalist” or “a virtue signalling gimp.”

Another post on this page attacks women and accuses women of being at fault for the “state of abject ethnomasochism” he feels we are in. He wants to get “back to where we once were before feminism fucked everything up.”

He leaves a message to women at the end of his post, “So screw you, screw your ignorance, screw your uselessness and screw your weakness.”

Each one of his posts is spewing hatred and division and yet he is permitted to continue to do this despite multiple attempts to report his page.

People on Facebook often face temporary bans for bad language or sharing too many times in a short period of time but you can claim superiority of the races, the sexes and glorify a mass murdering terrorist and only face having an offending photo removed. Where are the community standards in that?