Game of Thrones and the Khaleesi of the Liberals

Those whining in distress at the ending of the popular show were not paying attention - to the characters, to history, and reality in general, propounds PROFESSOR JAMES CROSSLEY

FURY over the ending of Game of Thrones rages. Hundreds of thousands have signed an online petition demanding the final series be remade. And chief among the grievances is the fate of the seemingly heroic queen, Daenerys Targaryen.

The argument goes something like this: Daenerys was built up as a beloved character only for the writers to betray the viewers by having her burn a great city with little regard for innocents or victorious soldiers raping civilians in the aftermath.

While Daenerys undoubtedly has compassionate characteristics, the show repeatedly flagged up her potential for righteous egoism and indiscriminate destruction.

She grew up believing that the Targaryens have an innate right to rule and established this rule with, to quote the words of her house, “fire and blood.”

Daenerys is content with and later echoes Drogo’s promise to deliver the Seven Kingdoms through tearing down houses, raping women, and enslaving children. Mirri Maz Duur, the healer who Daenerys burnt alive, knows perfectly well that Daenerys’ child with Drogo would have burned cities and trampled nations into the dust. Daenerys implies she would be prepared to return the city of Mereen to the dirt and would do so for the right reasons. Tyrion later warns her that flattening even the cities of slavers parallels her father’s plans to burn King’s Landing.

With everything that happens to her support in the final series and all the mistakes of her advisors, Daenerys’ response is clearly not out of character.

However, we should not be surprised that some fans are shocked that she is presented as a killer, despite all the evidence. We should be familiar with this sort of cultural phenomenon. To help us understand we need only look at the common liberal comparison between Daenerys and Hillary Clinton around the time of the 2016 American election. 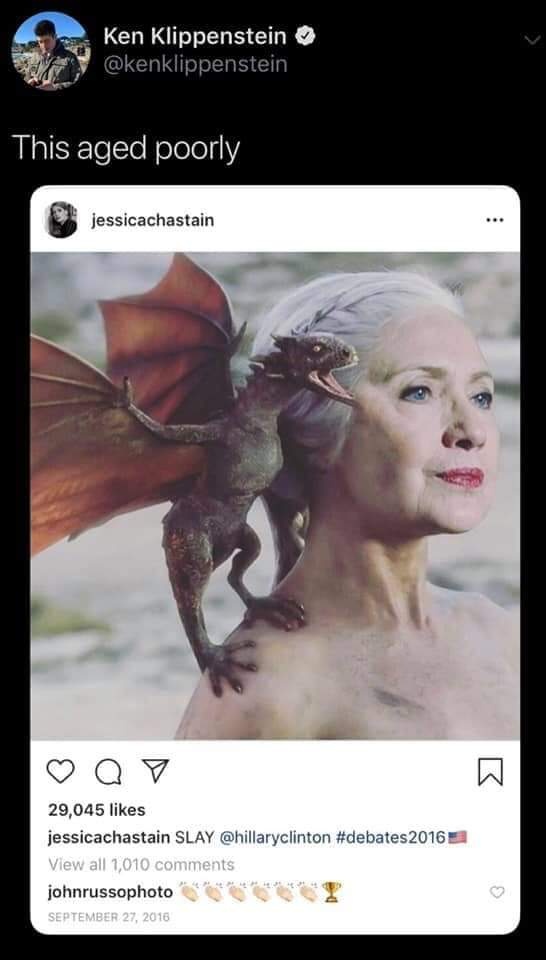 We saw clickbait articles comparing the two leaders-in-waiting, such as ‘Hillary Clinton: 7 Ways She’s Just like Daenerys Targaryen’ and memes with Clinton’s head proudly photoshopped on Daenerys’ body. Rather than revise or ignore these comparisons in light of what we now know, we should instead push this argument further.

Despite both characters’ overt hawkish and destructive tendencies, their supporters have a tendency to act as if this were somehow not the case. After all, the liberal argument for Clinton somehow managed to ignore or downplay her well-known views on Honduras and Iraq. Such fans have struggled to accept that their heroes might not be saviour figures, particularly when faced by a hated opponent. 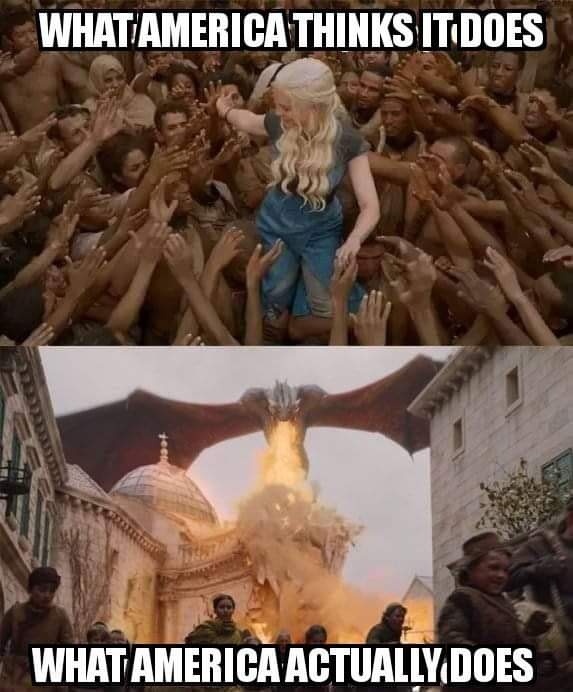 This deluded liberalism also needs to avoid another obvious point — Westeros belongs to a very different ideological and material world. The show and especially the books have been determined to get across that this is a feudal world with different values of honour to our world of liberal capitalism.

Certainly, it won’t be too difficult to detect the show’s own liberal fantasies (it too is of its time, after all) and there are characters who know that the stories are just stories, that a game is being played, and who hold certain progressive values ahead of their time. But the characters are also constrained by the feudalistic values of George R. R. Martin’s medieval world.

Take Samwell Tarly’s proposal for a new system of rule to come from the people. It was (eventually) treated as a joke because this is not a world where the ideological or material conditions are yet ready for such a dramatic democratic change. But with its Shakespearean wiping away of the old world to make way for the new, the show did not end by simply re-imposing what came before.

This is because there is a hint of a historical materialism at work in Game of Thrones. Samwell’s proposal might have been deemed ludicrous by the other characters (perhaps it requires a bourgeois revolution to implement) but the chaotic upheaval depicted over the eight seasons opened up the possibility for new ideas to challenge feudal power.

In different ways, the potential for a rethink had been hinted at throughout the show, such as among the Brotherhood without Banners and, in his own crude way, through the High Sparrow’s ascendency on the back of economic grievances aimed at the crown and lords.

Even the political compromise at the end is grounded in the acceptance that accident of birth is not a guarantee of just rule.

There are further hints that Westeros is starting its shift away from its dominant model of medieval feudalism. Arya’s journey to discover what’s west of Westeros on a ship bearing the sigil of an ancient house is a nod to European expansion towards the American continent, with all the potential for imperialism.

To the east, the Iron Bank is slightly contemptuous of the feudal world of Westeros and its claims of blood-right, preferring instead to deal with unambiguous numbers. If Samwell points to democracy, then others point to capitalist development.

Whether this was intentional on the showrunners’ part is beside the point. George R. R. Martin is well read in medieval history and beyond, and the show reveals hints of the transition away from the old feudal world that should not be lost on any student of history or student of historians — and certainly not anyone familiar with the famous historians of the shift from feudalism to capitalism, such as Rodney Hilton and Christopher Hill.

Daenerys' violence helps enable these changes but her dedication to feudalism belongs in the past. That a complex character like Daenerys (and she is hardly alone in the show) can simultaneously uphold a code of honour and be brutal in dishing out vengeance should not surprise us and, in this respect at least, the show was consistent in its portrayal of feudal leaders. The real betrayal of the characterisation of a feudal leader like Daenerys would have been to swallow whole her messianic propaganda as simply “the breaker of chains.”

By viewing the world from which Daenerys came anachronistically, this is precisely what some of her liberal supporters are now doing. And so it is fitting that their protest is epitomised in that most liberal form of protest today — the online petition.

‘You will not lock all of us up,’ LGBT rights protesters warn in wave of Polish protest

No relegation is a positive for us, says Hull KR boss

The furlough scheme must not be ended now