A landmark for the Institute of Employment Rights

THIS month marks the 30th anniversary of the trade union movement’s first and only labour law think tank, the Institute of Employment Rights (IER). 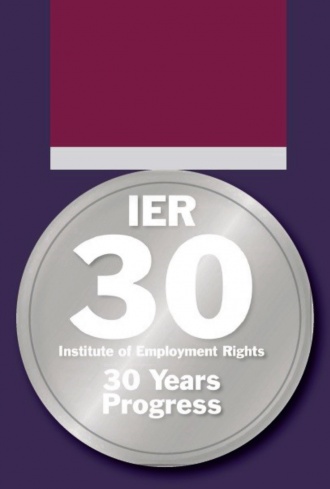 Established in the dark days of Thatcherism to offer hope and inspiration to those under constant attack from a hostile government, the institute has been producing booklets, delivering training sessions and generally informing the debate around employment rights and trade union freedoms since 1989.

Set up by a network of lawyers, academics and trade unionists, the IER has produced 200 titles and circulated over 350,000 booklets across the labour movement.

In 1999 the IER began taking its message direct to trade union members by organising conferences and events. Since then the IER has organised over 200 events, reaching an estimated 8,000 delegates.

As the IER turns 30 years old, its dedication and hard work in setting an alternative labour law agenda for Britain is bearing fruit.

It’s no surprise then that as the IER meets to celebrate its 30th anniversary year, messages of support from across the labour movement pour into its office.

But, like most organisations, hard work and dedication needs hard cash to back it up. When it comes to ideas and information, the IER wins hands down.

But, when it comes to cash in pocket, those on the other side of the fence have the winning hand. Add to that a mass media that constantly refers to the IER as in the pocket of “over-powerful unions” and warns of its manifesto policies as “taking us back to the 1970s,” it’s a battle for the IER’s sane and sensible policies to be heard.

To address those problems, the IER is running a 30th anniversary appeal, aimed at “rebuilding our financial base, modernising our communication methods and popularising our ideas.”

The IER hopes to raise £30,000 to celebrate its 30 years. That money will be spent modernising its website and online communication methods and promoting its ideas via meetings, education packs, videos and animations.

As we surge towards the possibility of a general election, informing the public about how a Labour government would transform their working lives is a message that needs to be heard.

As director of the IER, I’m extremely proud to be associated with an organisation that has not only survived but has grown — in numbers, in the diversity of our work and in influence.

Our success is down to the dedication of our officers and the academics who give of their time freely and so generously; to the support of our members who donate to our funds and disseminate our ideas to their networks; and to the stubborn determination of our trade union activists who continue to believe that another world is not only needed but is possible, and getting closer by the day.

If you can help raise funds or make a donation, visit www.ier.org.uk. The IER is holding a 30th anniversary event with Professor Keith Ewing, John Hendy QC and others tomorrow from 6pm-9pm at Hamilton House, Mabledon Place London WC1H 9BD.