‘Left’ excuses for murder in Malaya

A British Soldier holds up the heads of two Malaysians
×

LUKE AKEHURST, the Secretary of Labour First, the most muscular of right-wing factions in the Labour Party, is known for stirring controversy on social media, especially in his day job as cheerleader for Israeli aggression.

So strong was the movement for independence, it looked like Britain was going to lose.

Labour’s colonial minister, justifying the banning of the Malayan Communist Party in July 1948, claimed it to be “the nerve centre of the whole subversive movement.”

Then Labour lost office and a Tory government used old-fashioned divide and rule in a very expensive nine-year war from 1951 to 1960 that “crushed” the rebels.

Arguably, the Malayan Communist Party crushed itself. Dominated by ethnic Chinese, the party handled unity with other ethnic groups poorly.

Although the campaign for independence began well, with mass strikes directed at European-owned mines and plantations, the MCP reputation as the fiercest anti-Japanese fighters impelled it to retrieve weapon caches buried only a few years before.

Training guerillas in the jungle echoed the Maoist line of encircling the cities from the countryside but made no sense as the peasantry was predominately Malay, while Communist cadres were predominately suburban squatters.

MCP leader Chin Peng later admitted that the assassinations of three European planters on June 16, taken by the British as a signal for repression of Malay Chinese political forces, were an unauthorised mistake by lower-level cadres.

But the colonial authorities used this to go to war, though it was called an “emergency” to enable the owners of extractive industries to make insurance claims from Lloyds of London.

The ruthlessness, timing and severity of the state of emergency clearly took the MCP by surprise and its decision to go underground was ad hoc, a panicked retreat to the jungle.

The party had clearly expected a lengthy period of preparation for an independence struggle and its hurried switch from urban to rural revolt was confused and left its mass organisations rudderless. This was no carefully planned strategy ordered by Moscow or Beijing,

It was his mistaken view that either China or the USSR was determining MCP actions and that this  justified publicly obfuscating the real reason of economic motivation in defending British business interests.

He explicitly acted to prevent the true causes of British policy to be exploited by the Daily Worker as “ammunition to the more ardent anti-imperialist ‘Keep Left’ faction within the British Labour Party.”

At no stage did the MCP seek unilateral power. As early as the April 1954 conference of the Communist Parties of the British Commonwealth, it proposed a provisional coalition government of all parties to enable peace talks.

This compelled the British to concede internal security and defence to Malay forces, thereby expediting the arrival of formal political independence much earlier than would have been the case, but tensions were kept going by deporting MCP supporters to China or detaining them for decades.

MYTH 2: “The war was nothing to do with keeping Malaya in the empire.”

This was the only reason for the war. Malaya, as the world’s greatest exporter of rubber and tin, provided the bulk of tax revenues from the colonies. The US got about half of its rubber from Malaya and nearly all its tin.

Attlee’s government was broke and needed dollars to pay debts to the US. Parliament was not told that colonial exports accounted for about a third of Britain’s dollar earnings and Malaya was the single most important source.

MYTH 3: “Aneurin Bevan as a Cabinet minister supported this war.”

As Minister of Health, with a remit that also covered housing, foreign policy was not in Nye Bevan’s remit and he made no statement on the subject, but his close comrades were not supportive.

Bevan formally joined the group after he resigned from government in 1951, when Labour forced NHS users to pay half the cost of dentures and spectacles and make a standard payment for prescriptions, doubling military spending to go to war in Korea.

Bevan strongly believed that Communism was spreading in Asia due to poverty and imperialism, not due to the work of Moscow. He was certainly very critical of the war as it was pursued by Churchill, Eden and Macmillan.

Foreign secretary Ernie Bevin retired before Bevan resigned, making him a leading candidate for replacing him. But Attlee rejected him due to his left-wing politics and appointed him minister of labour.

The left in Labour was now emphatically against a Labour government using military means to suppress the struggles for independence in the Gold Coast (Ghana), Nigeria and Iran.

The government elected after the war is often thought of as starting the process that led to the end of the British empire. But economic exploitation of the colonies intensified, with the big monopolies gaining the benefit. The notion that Bevan had any time for this is patently absurd. 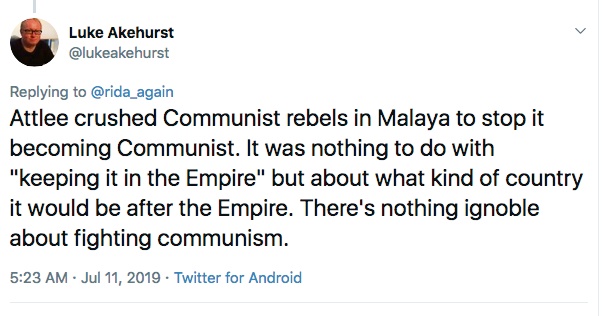 Although a long list of atrocities and breaches of human rights could be cited in response, it is Akehurst’s own test that should be employed against him.

Was the war worth it, if it’s true that the conflict was about what kind of country Malaya would be after leaving the empire?

Since independence was won by guaranteeing the permanent racist dictatorship of two-thirds of the population against one-third, based on ethnic division, this caused Malaysia to evolve in to one of the most negative societies in Asia, now as the shield for Arab finance in the Far East.

Malaysia is a fundamentally flawed and corrupt racist state, barely democratic, where Muslim fundamentalism is used to control people, state homophobic violence is perpetuated and trade unionism is managed out of existence.

MYTH 5: “Labour was against the empire.”

Labour’s attitude to black colonial subjects was simply racist. Study of its inter-departmental advisory committee on imperial questions reveals an obsession with empire policy as a potential party of government, albeit softening the image a little.

The committee claimed to be bringing an end to empire but “actually presented a renewed model of imperial rule.”

It focused on self-governance rather than independence, guiding “non-adult races” towards maturity meant that “Africans should be required to transform their societal structures in order to fit in with British norms.”

Labour aimed to “spring-clean” the empire, seeing colonial populations in a series of ranked levels of “Britishness,” modernity and civilisation, fitting the business consensus that Britain needed to retain control of colonial produce and raw materials, shifting the burden of economic crisis onto colonial subjects.

Graham Stevenson is a member of the central council of Liberation (formerly the Movement for Colonial Freedom).