FROSTY’S RAMBLINGS Sinking below the waves

A view of the Shetland Isles
×

ALL THE fuss of the Glasgow Cop conference is over. Will much come of it except a few useful video clips for Prime Minister Boris Johnson’s next election campaign? Frankly, I doubt it. I think Greta Thunberg got it just about right with her “blah, blah, blah” comment.

The world’s stateswomen and men, at least those who were at Glasgow, insisted they were having to take a global view, but I think it is easier to put in perspective if we look at the smaller, more detailed changes that climate catastrophe will bring.

For me, the most disappointing and frankly terrifying news to emerge was the threat to some of my favourite kinds of places. I’ve always loved islands and low-lying estuaries, the places where sea and land meet.

Glasgow agreement or not, the Polar glaciers will melt, sea levels will rise and many islands and muddy foreshores will completely disappear below the waves. 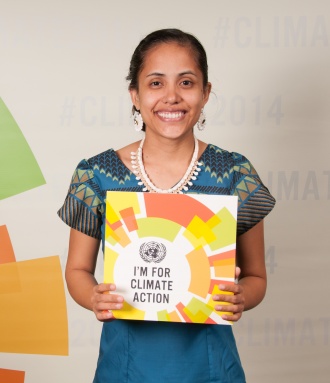 For me, one of the saddest speakers in Glasgow was a young woman, Kathy Jetnil-Kijiner. She is a poet and activist who was climate envoy for the Marshall Islands at Glasgow.

The Marshall Islands are a sprawling nation of more than 1,200 low-lying atolls and islands in the Pacific Ocean.

They have always been used as a shitheap by various governments of their powerful neighbours the US. Bikini Atoll didn’t just give its name to the briefest of swimsuits but also was used for generations of US atom bomb tests. The nuclear pollution over Bikini will last thousands of years.

Today those bomb tests may have finished but now the US navy dumps many of its redundant, but still dangerous ships here. They scuttle them in the islands. 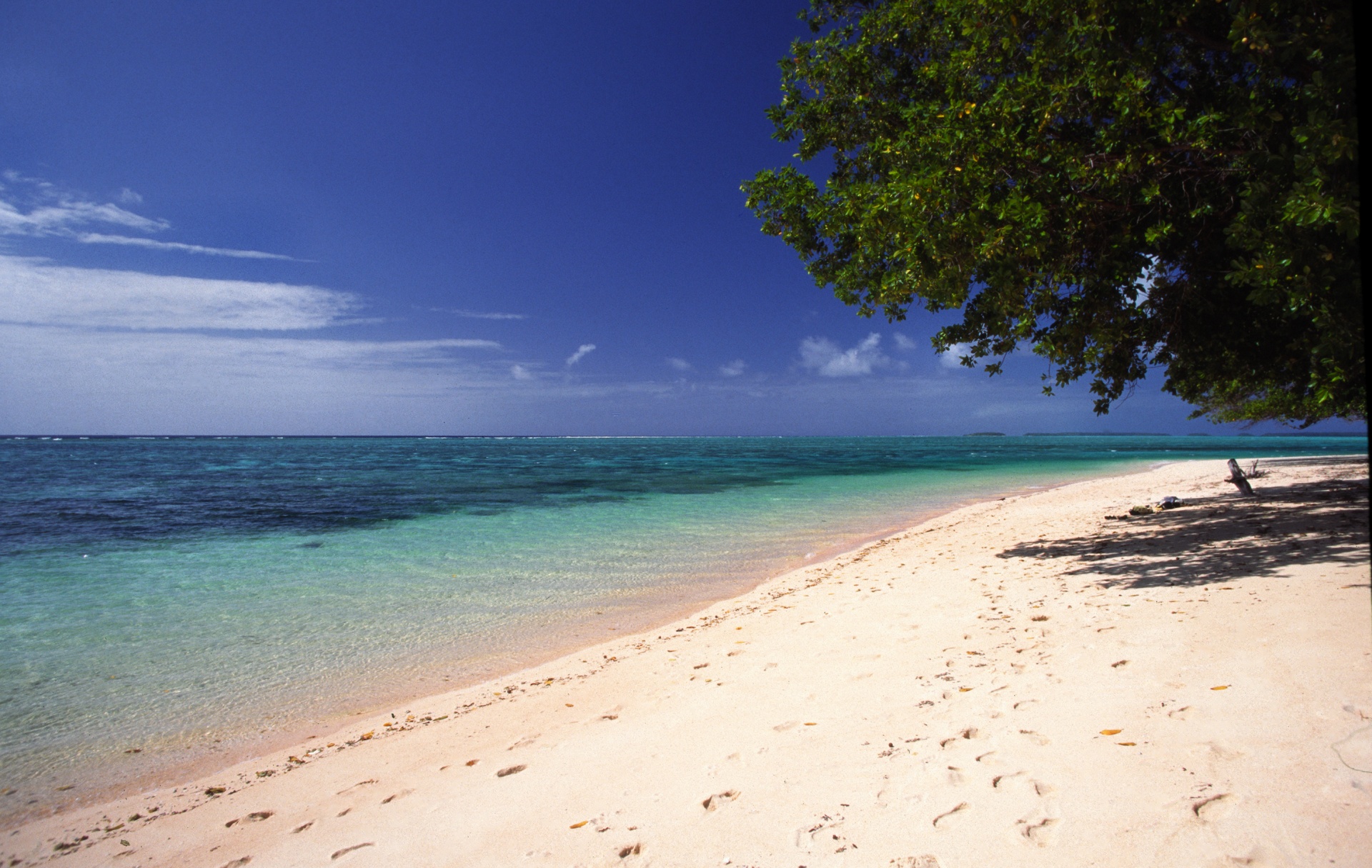 Nearly 100 warships have been dumped here, every one of them leaking poisons and chemicals and leaching all sorts of heavy metals and radioactive substances. A shitheap indeed.

The young Marshall Island poet told the Glasgow audience that the average elevation of her chain of Islands is just two metres (6ft 6in) and one of the most threatened countries in the world.

“Unlike other island nations,” she declared, “we have no mountains and there’s no higher ground to go to.”

For most of my life I was lucky enough to make my living writing about the holiday and leisure business. Islands were always first choices of destination at home and abroad.

My earliest holiday memories were of the Isle of Wight. Back in 1960 that pretty little island had a most unusual boast.

It reckoned that if everyone stood up and close together the entire population of the Earth could stand together on the Isle of Wight. Remarkable and true.

Of course today that world population has more than doubled from 3,032 billion in 1960 to 7,753 billion today.

Other British island favourites of mine would included Orkney, Shetland and the Hebrides and many large and small islands in Britain and abroad. Today they are at various levels of threat from rising sea levels.

Mersea Island off the Essex coast is another of my favourites. It is reached by a causeway that at already often floods at high water. 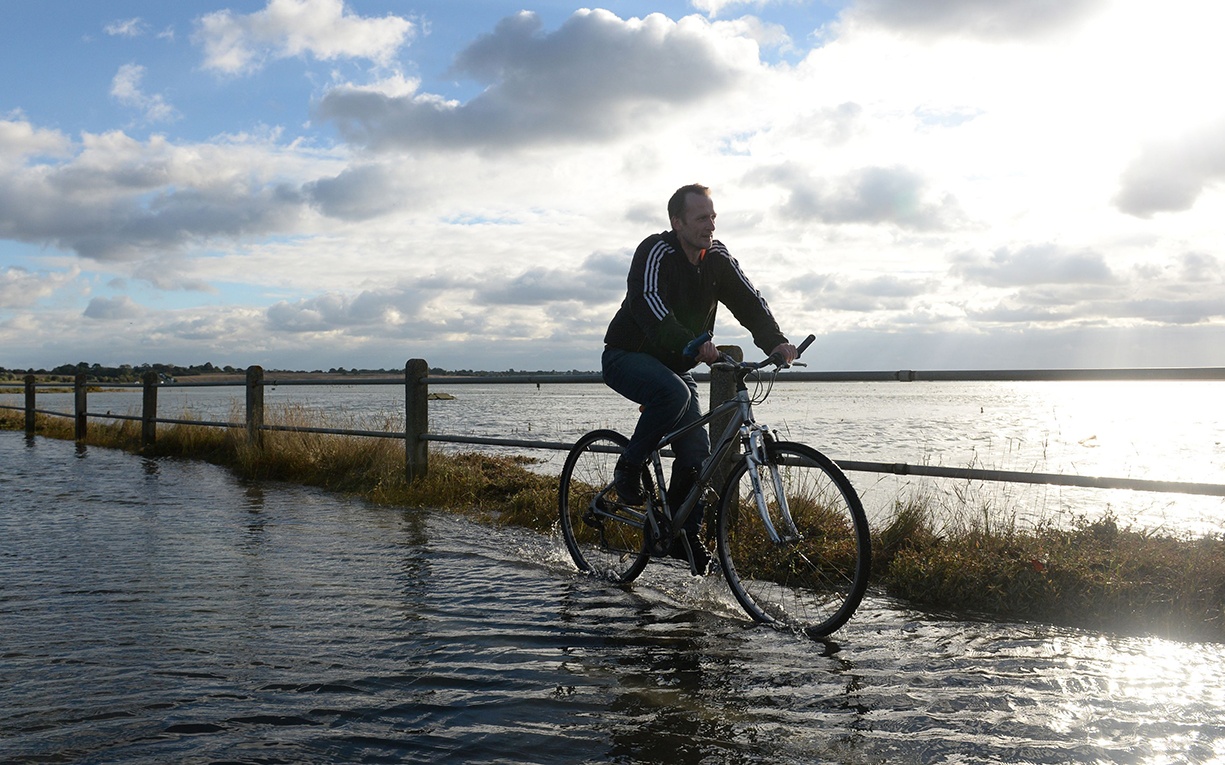 When you are not cut off by the tide the island is a great place to eat Essex seafood, including oysters, washed down with the English sparkling wine from the island’s vineyard, but for just how long?

I’ll finish my brief tour of some favourite islands in Wales, off the mainland’s north-west coast is the island of Anglesey.

It’s known for its beaches and ancient sites. The island is accessed by the 19th-century Menai Suspension Bridge and the Britannia Bridge, rebuilt in the 20th century. 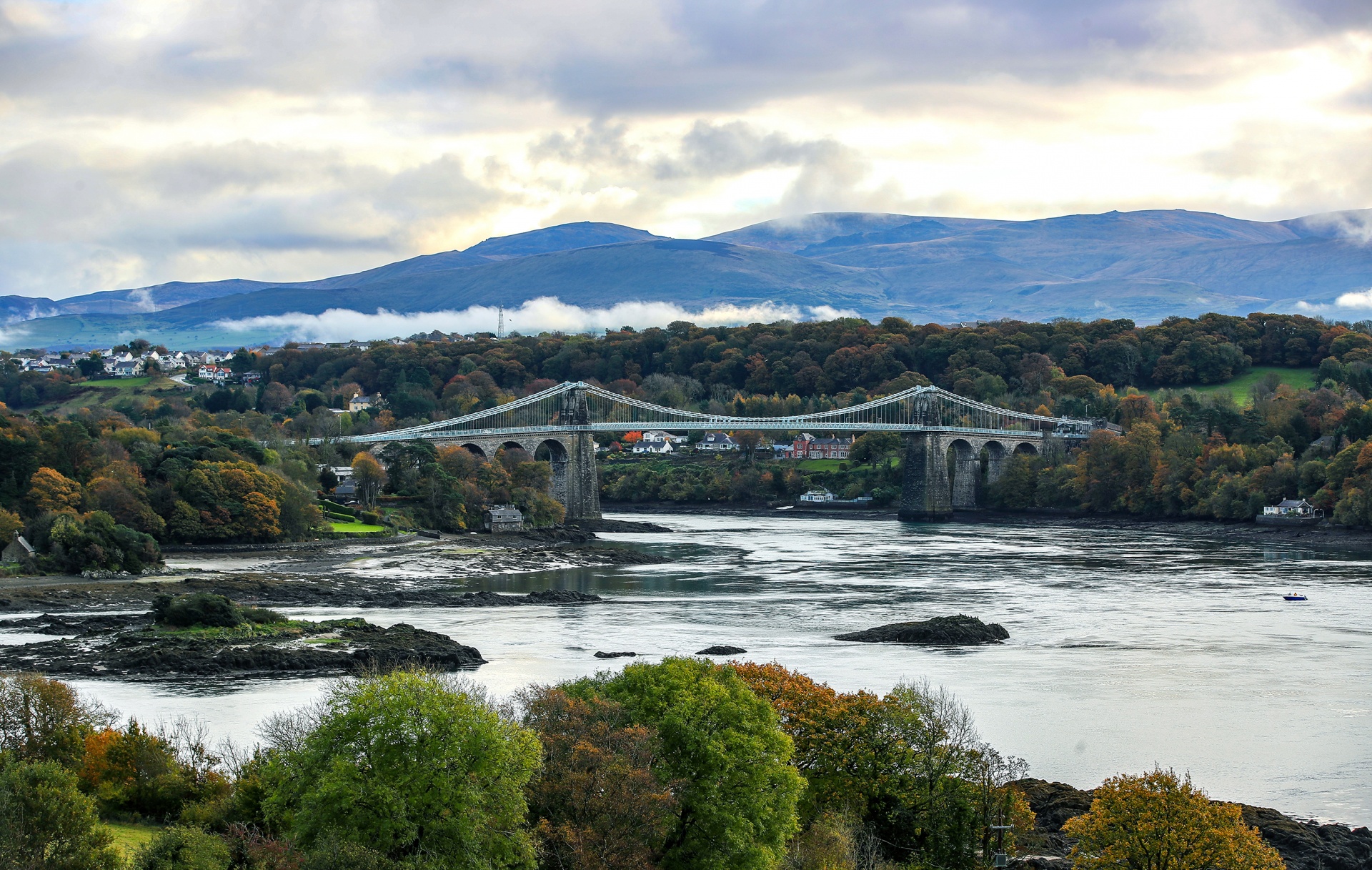 It isn’t just islands. One of my favourite locations in England is the low-lying interconnected mosaic of wetlands known as the Broads. This national park is most vulnerable to rising sea levels.

What will the Broads, which stretch across Norfolk and Suffolk, look like in a century’s time? And what can be done to try to safeguard this internationally important area, its wildlife and the people who live and work there?

The Broads itself is the result of medieval peat digging, and peat lies at the heart both of the Broads’ past and its future. 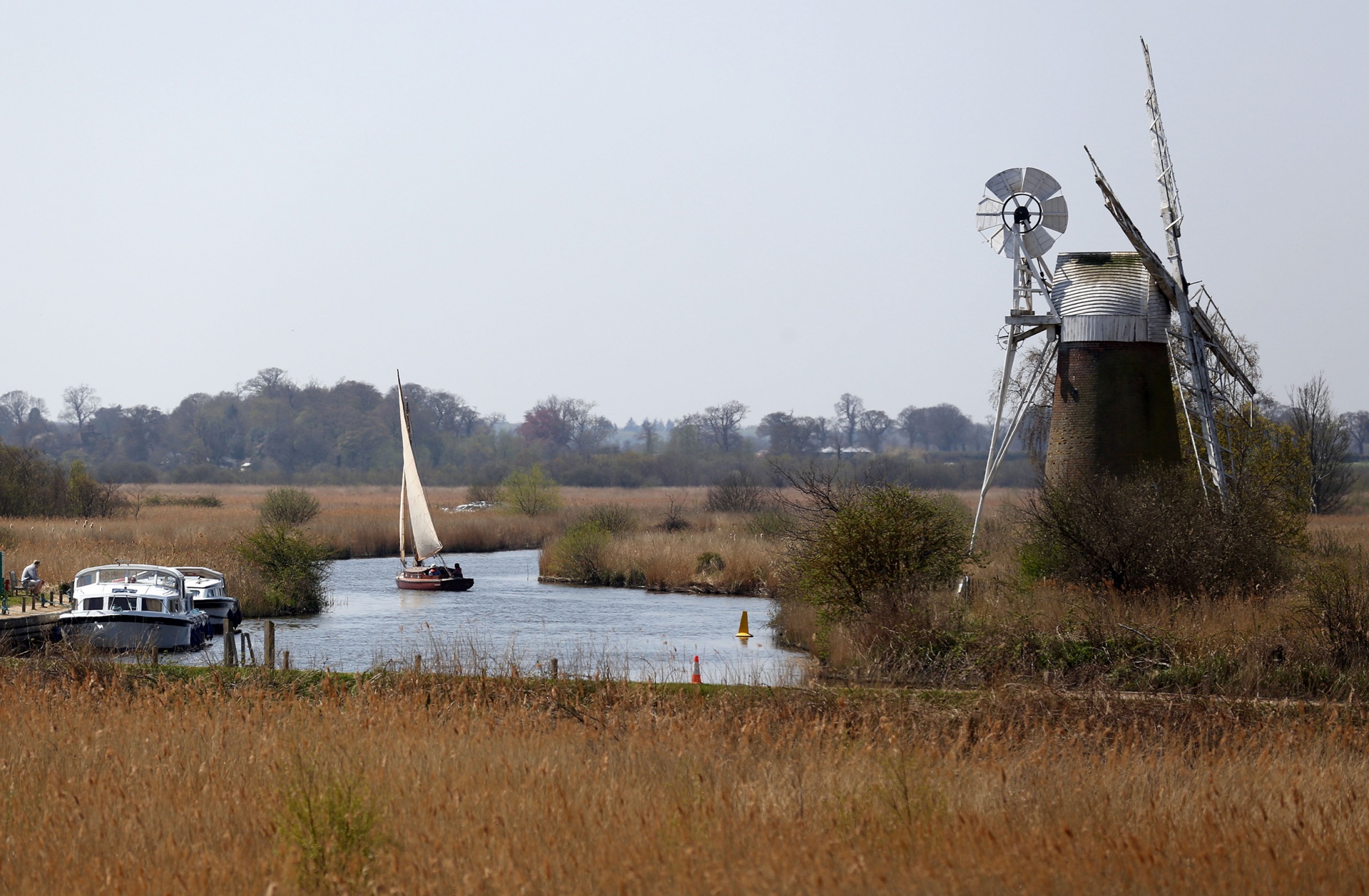 A wherry on the Norfolk Broads

“The Broads has always changed,” says John Packman, chief executive of the Broads Authority. “It is not a natural landscape, it is the result of mankind.

“I still see in 100 years” time the Broads still being a very special place, but it will be rather different. The biggest threat to the Broads is sea-level rise.”

Close to the sea, the Broads is a flattish landscape and low-lying.

“The sea has been a threat in the past. We had big floods in 1938 and 1953,” says Packman. “The sea can either come up the rivers through these big events that happen in the North Sea or through the coast. That, long-term, must be the big threat for us.

“The sea is going to rise by between half a metre (19in) and a metre (39in) over the next 100 years so my grandchildren will be facing a very different environment.”

A one-metre rise in the sea level would put much of the Broads underwater. This could happen in a sudden catastrophic event, he says.

“And nature struggles with catastrophic events,” he says. “That is why we are particularly trying to engage with local people to see if there is a way over the next 50 years of finding ways in which this landscape can adapt to the threats that it faces.”

So what might the Broads of the future look like? “We will probably have saltmarsh, or more saltmarsh, and different forms of agriculture and that is one of the things we are exploring,” Packman says.

“Most of the settlements were built on little bumps,” he says. “So I suspect those settlements are going to be there for a long, long time, but they will be surrounded by a different landscape.

“If you look at the maps of when the Romans were here, it was a very different landscape. We may see something that may be more familiar to the Romans than it is to us.” 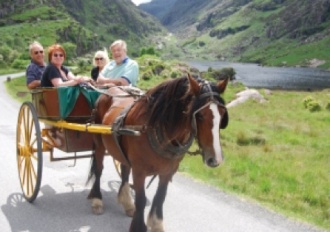 But what can be done to manage the impact of climate change in a place like this? Packman says the authority’s role lies in “demonstrating what other people might do. For instance, using different forms of fuel that burn much more cleanly,” he says.

When I visit the Broads these days, I try to hire an electric day launch or a small sailing yacht, both great examples of green, no-emission transport.

Packman thinks he and his staff can go further. “Using electric vehicles and thinking about how we operate and how our staff operate, such as more working from home, cutting down all of our emissions, but also, critically, working with the public.

“Perhaps we can have a bigger effect by working with the people in this part of the world.

“In the same way restoring rainforest locks in carbon, we are doing that on a smaller scale in the Broads,” he says. “So reed grows very rapidly and it locks up carbon and lays down peat — and the peat that our ancestors dug up releases carbon when it is burnt.

The Broads Authority is at the centre of a new partnership group called Electrifying The Broads. This will seek to replace the fossil fuel-powered fleet of private and hire boats.

There are currently no environmentally friendly options for hire vessels that spend weeks away from their base.

The group, which will be funded by the Department for Transport alongside 54 other schemes across the UK, will look at ways of decarbonising the propulsion of the most-polluting cruising vessels and look at the need for electric charging infrastructure throughout the Broads.

For me it will be the practical results on the ground rather than grand declarations that will really measure just who is winning the climate war.

I know whose side I am on. I’m not sure if the results from Glasgow are on that side too.