A self-portrait of Isaac Rosenberg
×

CHRIS SEARLE has been sending in his handwritten jazz columns to the Star on a weekly basis for years and, while old hands might be familiar with his poetry and politics, our new readers probably have no idea just how fascinating a life he has led. 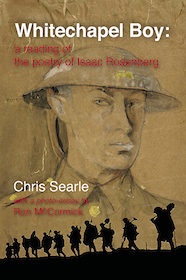 It might surprise both new and old readers to find out how our jazz correspondent’s entire life has been inspired by an early 20th century poet as he revealed when I spoke with him last week about his new book Whitechapel Boy: A Reading of the Poetry of Isaac Rosenberg (pictured).

Isaac Rosenberg is one of the lesser-known poets of the first world war. The son of working-class Jewish immigrants, his family moved from Bristol to Stepney Green in London’s East End in 1897. “I owe to him and his poetry,” Searle says. “Everything that I’ve ever tried to do has been originally inspired by Rosenberg.”

“Ever since I’d first read his poetry at Leeds University in the early ’60s, I’d been fascinated by him. The power of his poetry, the way in which he wrote and what he wrote about completely captured me.

“He was a working-class boy, who spoke Yiddish at his home and only learnt English at school. But he mastered the language to such an extent that he wrote some of the great poems of English literature.

Wilfred Owen and Siegfried Sassoon were officers and could go into their underground shelters where they had desks and such, but all Rosenberg had was the trenches

“If you read some of the poems he wrote in the last part of his life when he was in the trenches, they’re very profound and humane, with an enormous depth and understanding of the power of English verse.”

Searle was born in Romford in 1943 and has been a teacher his whole adult life. His early career saw him teach in Canada, Tobago, Grenada and Mozambique. He has lived the past 30 years in Sheffield, but it was his fascination with Rosenberg’s life that brought him back to Britain and to teach in Stepney Green in the early 1970s.

“I lived and worked in the streets where Rosenberg lived. The school where I taught was in the same row where he had lived 60 years before. It was almost as if he was there with me while I was teaching.”

Searle saw many of the children he taught in East London as being in the same linguistic position as his literary hero. They were bilingual and learnt to speak English at school. His main focus was to get the children to write their own poetry. He says the poetry they wrote came out of his love for Rosenberg.

“But the of course, I found myself in deep trouble in 1971. I made an anthology of my students’ poems called Stepney Words and sought to get the permission of the school to sponsor and publish it. But the governors of the school, who were mainly right-wing Anglican priests and City businessmen, forbade me to publish it.

“They thought the poetry was too gloomy, too realistic. They wanted the lighter side of local life, but the children had written about social problems, about bad housing, about racism and about the loneliness of city life.” 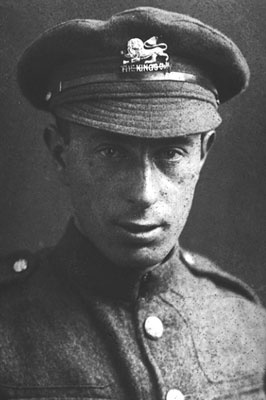 Isaac Rosenberg in his military uniform

Searle went ahead and published Stepney Words and, when the governors saw what he had done, they sacked him.

“When the children heard I got the sack for publishing their poems, they came out on strike. For three days they refused to go into school and rallied and campaigned outside on the green outside.

“It took me two years, but I eventually got back into the school. But really it was the children’s strike and the publicity that it generated that was responsible for getting me back into the school plus, of course, the tremendous support from my union, the National Union of Teachers.”

The time in which Rosenberg lived in London, the early part of the 20th century, was a crucial period for the working class. After centuries of oppression, they finally began to organise.

“In the years before World War I, Rosenberg was one of the so-called ‘Whitechapel boys’ — a group of artists, poets and political activists on the left. They were all members of the Stepney and Whitechapel Socialist League and gave terrific support to the tailors in their strike in 1906 and the 1911 strike of dockers and transport workers.”

During this time, however, Rosenberg never escaped sheer poverty and so, despite his deep opposition to the war, Rosenberg enlisted in the British army in 1916.

“Some people became conscientious objectors, like Bertrand Russell, but Rosenberg was so impoverished that the only way he could see his family surviving was to join the war. When you were a soldier, you were paid what was called a separation allowance, which went to your parents.

“He only joined the army so that his mother and father wouldn’t starve. It was the situation for thousands of working-class young men when the war started.

“Most of the famous poets of the first world war, people like Wilfred Owen and Siegfried Sassoon, were officers. So, although they endured terrifying experiences, they had a very different life to the privates.

“Rosenberg talks about being a private as being akin to absolute slavery and, of course, because he was physically very weak, working class and Jewish, he was subject to all the authoritarianism and racism of army life.

“To write poetry from the depths and degradation from the trenches was almost impossible, but he managed it. And that’s another extraordinary facet of his achievement. You know, the officers could go into their underground shelters where they had desks and such, but Rosenberg had nothing like that. All he had was the trenches. He had no resources, no materials.

“Here am I sitting at a table with a cup of tea writing about jazz and Rosenberg wrote a poem half-covered in mud, with dying people one side of him, with shots raging, shells exploding and shrapnel going everywhere and yet he still managed to write such works as Dead Man’s Dump — a poem of enormous power and humanity, which I believe to be perhaps the greatest war poem in the English language.”

Rosenberg never made it back from the trenches. He was killed on April 1 1918 at 27 years of age.

Searle believes Rosenberg has been largely ignored and that his work is all too often dismissed as non-mainstream, non-English. This, he says, is a form of cultural racism similar to the type he dealt with throughout his life.

“When he moved into Stepney as a boy, his local MP was a member of the British Brothers League, which was a fascist organisation. He called the Jewish immigrants ‘the off-scum of Europe’. Imagine your local MP referring to you as that.”

Searle’s book is an attempt to redress this and bring his work into the spotlight. “The thing about Rosenberg is that his deep humanity shines through his work. He was an internationalist.

“Although he was immersed in the horror of war, he hated it. He was a deep critic of it. He talked about his ‘brothers dear,’ the ordinary soldiers not only of the British army but also of the Germany army that he faced.

“In one of his most famous poems, Break of Day in the Trenches, it’s dawn, which was the hour of the most likely and imminent attack from one army against the other, and he sees a rat crossing back and forth across No man’s land.

“The rat becomes a symbol of unity, of fraternisation between the German soldiers and British soldiers, most of whom in the front lines would be young and working class, from all over the world in the British army.

“In the last weeks of his life, he was trying to write. He could only write fragments because of the conditions in the trenches, but he was writing a verse play called The Unicorn. It’s about a slave revolt led by an African man, who is a leader of immense intellectual qualities, who leads his people away from oppression. And this was 1918. He was in the French trenches in the most horrendous conditions and here he was writing of Africa freeing itself of oppression.

“I used to teach in Africa, in Mozambique. And that was deeply inspiring for me to know that Rosenberg had written in that way when back in 1918 in the most terrifying of conditions.

“He is a symbol of working-class internationalism. He hasn’t been portrayed that way to any great extent, but to me that’s what he means. ”