Podcast Interview ‘Thousands of Mexican families are living in limbo’

ON SEPTEMBER 26, 2014, around 100 students from the Ayotzinapa Rural Teachers’ College in Guerrero, Southern Mexico, were on their way to Mexico City to join an anniversary march in remembrance of those killed in the 1968 Tlatelolco massacre.

Without the transport or the funds to get themselves there, the students headed to the nearby town of Iguala, where they commandeered two buses.

Before leaving town, they were met by a police roadblock. In the ensuing clash, the police shot and killed three of the students and apprehended 43 of them, none of whom have been seen since.

The official investigation into the Ayotzinapa 43 concluded that the police handed the students over to the local cartels who likely killed them. No-one knows for sure what happened.

Though a number of people, including police officers and a former mayor of Iguala, have been arrested, the Mexican government has come under intense scrutiny for failing to investigate the involvement of the federal police or the military.

Forced disappearances are common in Mexico — as are arbitrary arrests, extrajudicial killings and torture at the hands of criminal gangs, the police and the military, all of which enjoy almost total impunity.

The official number of people forcibly disappeared in the country stands at over 34,000. To put that grim figure into some kind of context, General Augusto Pinochet’s Western-backed regime in Chile from 1973 to ’90 is thought to have disappeared over 3,200 people.

On July 1, Mexico goes to the ballot box to elect a new president in one of bloodiest periods in the country since the so-called Dirty War in the 1960s and ’70s.

Ahead of the general election this weekend, I caught up with Lupita Valdez of Justice Mexico Now, a campaign group working to raise awareness of the country’s human right crisis in Britain.

Ben Cowles is the Morning Star’s web editor. He can be reaches on Twitter via @Cowlesz. 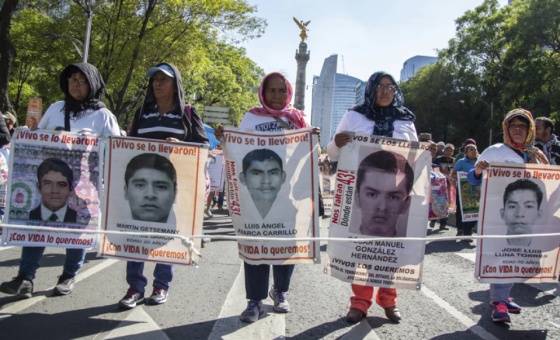