Members of the Democratic Football Lads Alliance raise nazi salutes and flip off anti-fascist protestors, in London, in May 2018
×

WEST HAM were under pressure today to take action after one of the club’s youth coaches allegedly attended a far-right march in London at the weekend and expressed his support for the Democratic Football Lads Alliance (DFLA).

Under-18 coach Mark Phillips wrote on his Twitter feed last Friday: “Stratford. 11am. If you know, you know.”

This was then followed after by another tweet after the DFLA had marched through the capital, reading: “Good turnout as usual from the West Ham fans today in W1. Always the biggest [party]. Fair due to Millwall as well good show south London.”

The above tweets have since been deleted.

The DFLA march at the weekend was opposed by counter-protesters made up of anti-fascist groups and trade unionists from Unite, RMT, the National Education Union, the University and College Union and the Communications Workers Union.

A Stand Up to Racism spokesperson told the Star: “The DFLA is now widely recognised as a far-right Islamophobic hate mob, their agenda is rejected by the vast majority of football fans.

“Football clubs must be inclusive of players and fans of all backgrounds. West Ham is located in one of the most diverse parts of London with a particularly large Muslim population in Newham, Tower Hamlets and Barking and Dagenham. Racism is to the detriment of thriving football locally.

“Mark Phillips must face disciplinary action and whether any impact Phillips has had on preventing African, Caribbean and Asian young players coming through the ranks of West Ham must be investigated.” 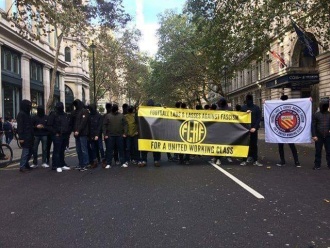 A spokesperson for progressive group Football Lads and Lasses Against Fascism also called on West Ham to act.

“No working-class person likes to see anyone lose their job. But West Ham is in the heart of east London, and Newham is probably the most mixed community anywhere in Britain.

“While many people in the DFLA don’t think they are racist — and we accept some individuals might not be — they don’t understand the DFLA have a racist agenda and are clearly led by far-right extremists.

“For someone who should be seen as a role model to give support to the DFLA is unacceptable.

“His statements and actions make his position untenable. Unless he apologises unreservedly and without equivocation for his actions and promises that there will be no repeat of them, he should resign.”

A West Ham spokesperson told the Star that the club was aware of this alleged incident, are taking it seriously and looking into it.

“West Ham United is an inclusive football club. Regardless of gender, age, race, ability, religion or sexual orientation, every supporter within our diverse fanbase is warmly welcomed at London Stadium, free to enjoy watching their team play football without fear, discrimination or abuse.

“We have a zero-tolerance policy to any form of violent or abusive behaviour. We continue to protect and cherish those values and we remain committed to ensuring that every single member of the West Ham family feels safe, respected and included.”