Book Review Revelatory walks through the city of light and revolutions

A Walk Through Paris: A Radical Exploration
by Eric Hazan
(Verso, £10.39)

ONE of my great pleasures when residing in Paris was walking through the city. I lived close to the Gard du Nord in the immigrant area of the Goutte d'Or, first made famous in Emile Zola's novels and evocatively described in Eric Hazan's A Walk Through Paris. 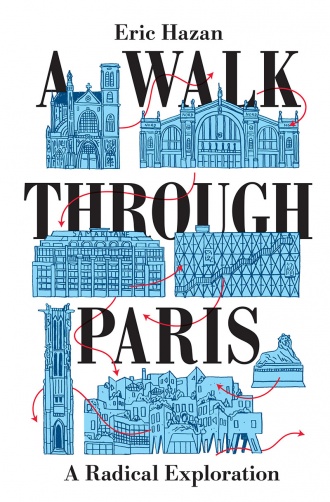 It only took an hour or so, heading south, to reach the Seine and the epicentre of “the city of light” and over time, as I grew more familiar with the city's topography, I'd drift away from the imposing Haussmann boulevards into the local neighbourhoods, a limitless source of ever-intriguing discoveries of cités, impasses and hotels, particularly in working-class areas which, unlike in London, are just about resisting the gentrifying tides of  “regeneration” that have decanted local populations from its centre.

In his book, Hazan takes a different trajectory, passing through the east-west Paris meridian and in his meanders, which start in a bookstore in the formerly communist stronghold of Ivry and end in another in the "red belt" town of St Denis, he seeks out, street by street, the “very distant fragments of the past on the border of forgetfulness.”

There can be no better guide than the author in revealing these sites of the unknown, the airbrushed from history and the unexpected. His magisterial The Invention of Paris is one of the best radical histories of the capital written and he brings a similar leftist sensibility to this book, published in Britain to coincide with he 50th anniversary of the May 1968 student revolt.

At the same time as it sheds new light on the tourist hot spots of the Luxembourg Gardens, Beaubourg and Montmartre, it also delves into the radical past and present of a city which over the last three centuries has witnessed republican revolution, the inspirational example of the 1871 Commune, resistance to nazi occupation, the heady days of May 1968 and, from the time of Jacques Chirac's kleptocratic tenure as mayor in the 1970s, a brutal urban reconfiguration.

Hazan draws on his encyclopaedic knowledge of literature, politics and scientific discovery — he was at one time a practising surgeon — to construct a hugely engaging commentary with its finger on the city's still-beating radical pulse.

It's a book that also has revelatory insights into the city's monumental and vernacular architecture, an example being the author's meditation on the facade of the Gare du Nord, a model of acuity which puts the constipated prissiness of a Pevsner or a Betjeman to shame.

"The facade of the Gare du Nord was a masterpiece," Hazan writes."It is a shame that no-one stops to contemplate it, whereas crowds throng in front of the facade of Notre Dame, whose statuary is no older than that of the railway station … On the sides, statues represent the northern capitals – Berlin, London, Brussels, Amsterdam. These proud and elegant women, dressed in the antique style, were sculpted by artists now forgotten but are a match for many exhibited in the Musee d’Orsay."

Next time you're in Paris, bin that overpriced guide to its churches and palaces. Armed with this marvellous book, a map and a Guide du Routard for refuelling stops, you'll truly connect with the city and the people who have made it what it is.

A walk through Paris is literally an eye-opener — would that it were available when I lived there.