Book Review The real threat to peace in Asia

Fire and Fury: How the US Isolates North Korea, Encircles China and Risks Nuclear War in Asia
by TJ Coles
(Clairview Books, £10.99)

THIS short book by British academic TJ Coles will perhaps not receive as much attention as another recently released work on Donald Trump that shares its name. It is, nonetheless, an important and insightful book, providing as it does an alternative viewpoint on the escalating crisis over Korea and in promoting an urgent message of peace. 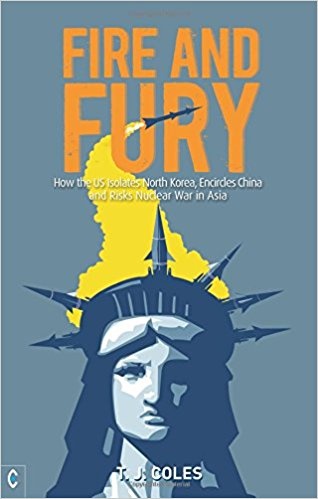 Coles's primary aim is to dismantle the idea that the Democratic People’s Republic of Korea (DPRK) is a serious danger to regional and global stability and that it is an aggressive nuclear state that deserves to be “met with fire and fury like the world has never seen,” as threatened by the US president.

The ball is in the US's court in terms of promoting denuclearisation and de-escalation. The DPRK has stated many times that it would be willing to end its nuclear programme in exchange for diplomatic recognition by the US, an end to sanctions and a guarantee against regime change operations.

In a world where Iraq, Libya or Yugoslavia can be "taken out" by Nato, such demands are not unreasonable. Coles catalogues the numerous attempts made by the North Korean government to conduct substantive negotiations with the US and South Korea, only to have its efforts frustrated by successive White House regimes.

Coles makes it clear that it is the US, not the DPRK, that is the serious threat to peace. He notes that Western media very conveniently hide the fact that the US refuses to adopt a no-first-use policy when it comes to nuclear weapons and that China, Russia and North Korea each have a general “no-first-use” policy.

Its deployment of the Terminal High Altitude Area Defence (THAAD) missile “defence” system is highly dangerous and provocative. It is aimed not only or, indeed, primarily at preventing North Korean aggression but at containing and threatening China. The THAAD system, much like Reagan’s “Star Wars,” seeks to render other countries’ nuclear weapons redundant, thereby expanding possibilities for the US to engage in nuclear blackmail.

The take-home message from the book is that we must demand an end to US warmongering and bullying, expose the attempts to paint the DPRK as a threat to regional stability and support multilateral negotiations towards a lasting peace.

But it's a book that's not without flaws. Without any real analysis of the subject, Coles writes off the DPRK’s political system as “despicable” and, while it's the case that its form of socialism is certainly quirky, and its leadership makes mistakes, it’s important for the Western left not to universalise its own idiosyncratic culture and take an arrogant attitude towards those who don’t follow it.

The DPRK’s vision of socialism incorporates elements of Korean nationalism and neo-Confucianism that, while not Marxist, bridge the gap between strongly entrenched traditions and modern socialist ideas.

Much the same could be said about Latin American liberation theology and its combination of socialist ideology with Christian teaching. When assessing a political culture, we should be careful to avoid subtly bolstering imperialist cultural hegemony.

Another criticism is that the book is not terribly well organised, moving unpredictably from well-sourced and properly referenced sections to bold, unsubstantiated statements.

Defects aside, Fire and Fury is an important book that deserves to be read by all those who wish to see peace on the Korean peninsula. Good books to read alongside it include Selig Harrison’s Korean Endgame: A Strategy for Reunification and US Disengagement and Tim Beal’s North Korea: The Struggle Against American Power.