Book Review Timely analysis of the far-right menace, then and now

Tomorrow Belongs to Us: The British Far Right Since 1967
Edited by Nigel Copsey and Matthew Worley
(Routledge, £24.99) 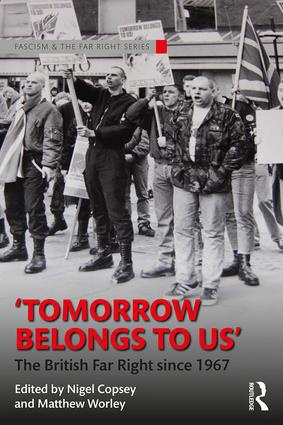 Tomorrow Belongs to Us focuses more specifically upon the far right in Britain since the formation of the National Front (NF) in 1967, although the collection does include a chapter exploring attempts to export the NF elsewhere, to Australia, New Zealand and South Africa.

There is also a chapter on the links with Greece’s far right Golden Dawn party, including attempts to build support for it in Britain following the murder of two of its activists.

The title of the book comes from a song written by two US Jews for an anti-nazi film — an ironic origin, given that this song was then reworked into a rock anthem as well as providing a slogan for the British National Party in the 1980s.

The references back to nazism were only too relevant, though, as the first chapter demonstrates. It charts the course of Holocaust denial and the British far right from the formation of the NF in 1967 onwards and subsequent chapters pick up further echoes of nazi mythology too in far-right obsessions with myths of Jewish conspiracies, linked to global finance capitalism and international communism. After all, Trotsky was Jewish, which was somehow supposed to lend credence to the argument.

Subsequent chapters explore the varying ways in which the far right has developed as it attempts to manage the tensions between street violence versus the need to appear more respectable in order to appeal to wider audiences and to win votes.

The chapters on homophobia and gender illustrate further tensions too, set against the background of changing attitudes and cultures. There are nuances to be understood here. Even the English Defence League (EDL), generally associated with street violence, needs to be seen in the context of activists’ emotional responses to grievances.

This raises wider questions about the failures of the liberal left in general, and new Labour’s so-called third way more specifically, in its lip service to neoliberal globalisation, privatisation and the politics of austerity.

As Danny Dorling has stated, this was how new Labour and the liberal left media “created the circumstances in which the English Defence League would grow and of how Ukip and the EDL are linked.”

The need for socialist alternatives, as exemplified by Jeremy Corbyn’s leadership of the Labour Party and by the Morning Star could hardly be clearer.

Further understanding of the far right is clearly needed too and Tomorrow Belongs to Us has a very useful final chapter providing a guide to supplementary reading.

Sunday 23rd Feb 2020
Macron says Brexit cannot be allowed to affect Common Agricultural Policy subsidies
Sunday 23rd Feb 2020
An apology for the cartoon published last Tuesday
Thursday 20th Feb 2020
Over 1,000 journalists from across the world unite in defence of Julian Assange
Monday 24th Feb 2020
Editorial: The US doesn’t want its crimes exposed – because they are still going on
Monday 24th Feb 2020
BBC urged to ‘stop trying to compete with Fox News’ after ‘giving racists a platform’
Join the 501 Club

Beyond the elections: Israel at the cusp of a bleak era