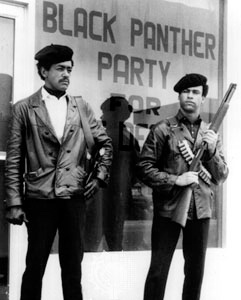 The tragedy at Parkland sent shock waves across the country, as students and politicians on the left have come out overwhelmingly in favour of stricter gun control legislation.

Young organisers from Parkland have themselves banded together in a unified call to ban automatic assault rifles. They are also calling for bump fire stocks to be effectively banned through regulation.

For several black and brown communities, however, the discussion around more gun control legislation can raise some concerns about setting a dangerous precedent.

Being anything other than anti-gun in US leftist circles is often considered taboo, but, among the historically disenfranchised, the conversation inevitably turns to the racist roots of gun ownership restrictions.

It is no secret that the National Rifle Association (NRA) has in the past upheld gun control restrictions that are often racist in their application, even as they attempted to exploit grievances against racial discrimination for their own agenda.

Former NRA president David Keene stirred controversy in 2013 when the pro-gun figurehead was quoted saying: “You know, when you go back in history, the initial wave of [gun laws] was instituted after the [US] civil war to deny blacks the ability to defend themselves.”

Keene is not wrong in pointing that the earliest gun control legislation strictly prohibited black gun ownership. Furthermore, it put in place the template for the modern systemic violence that affects marginalised communities to this day.

Historians often point to the “Black Codes” put in place immediately after the US civil war aimed at keeping guns out of the hands of freed slaves.

It goes back further than that, though. As early as 1751, the French Black Code gave rights to Louisiana colonists to profile black individuals “carrying any potential weapon, such as a cane.” If they refused to stop on demand, white colonists were granted authorisation to “shoot to kill.”

Documentary filmmaker Michael Moore even went so far as to imply that the founding of the NRA was rooted in reactionary white fear in his 2002 Oscar-winning documentary, Bowling for Columbine.

On December 24, 1865, the Ku Klux Klan was formed in Pulaski, Tennessee, approximately two years after three million black slaves in the United States were freed.

It wasn’t until passage of the Third Force Act, in 1871, that the KKK became an illegal terrorist organisation. That very same year in November, the NRA was founded in New York.

Though we now hear calls for gun control following mass shootings like the one in Parkland, historically, increased gun regulation has often been a response to people of colour exercising their second amendment rights.

When the Black Panther Party (BPP) took over the California capitol building in Sacramento in 1967, they exercised their open carry rights.

Though the BPP was primarily a community-focused organisation overseeing programmes like free breakfast for children and health clinics, it was also widely remembered for its militant tactics and armed guards.

Shortly after the “invasion” of the capitol building,  then California governor Ronald Reagan signed the Mulford Act, prohibiting open carry of weapons in public places.

Reagan later flip-flopped on his stance on open carry when he entered the 1980 presidential campaign as a known supporter of the second amendment right to keep and bear arms.

Nevertheless, plenty of black nationalist movements, socialist organisations and other left-leaning groups have argued, at times, in favour of responsible gun ownership.

He argued that arming communities was the only legitimate means of battling oppressive regimes, stating “the gun is the only thing that will free us, gain us our liberation.”

Even civil rights activist Martin Luther King Jr, known for his emphasis on non-violent resistance, applied for a permit to carry a concealed firearm in 1956, and was denied, after his house was bombed.

Despite the long racist history of gun legislation, the radical left cannot avoid serious debate on the topic. Fortunately, the conversation around preventing mass shootings in the US has progressively shifted towards addressing the broad range of underlying issues linked to firearm regulation.

We are now moving away from dangerous notions that automatically assume a link between violent behaviour and mental health, which studies have proven to be uncorrelated.

The culture of white supremacy and toxic masculinity that we uphold as a society is perhaps a much clearer indicator of violent tendencies than any mental health issue could be.

Cruz, for example, was known for talking about wanting to kill friends and their parents. He also expressed racist beliefs towards Mexicans, Jews, and black people in several private group chats.

Needless to say, forging a unified progressive stance on gun control legislation won’t be a simple task, but young activists are making their voices heard.

With youth of colour leading social movements across the United States, we can only hope that the newer generation will guide a deliberate and intersectional discourse around the safety of all communities.

This article first appeared on peoplesworld.org.