SPOKEN-WORD poetry is still deciding what its history is. It’s been around long enough and it’s big enough. The fact is, spoken word is made up of poetries and there’s much to all those histories. 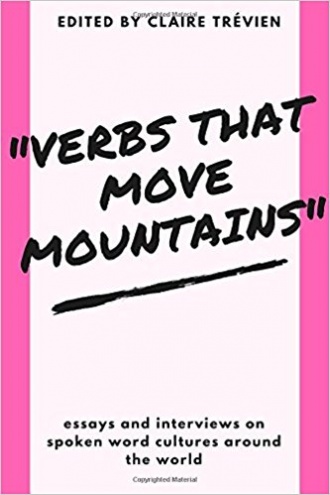 The recently published Verbs That Move Mountains: Essays and Interviews on Spoken Word Cultures Around the World, edited by Claire Trevien, is about the now of spoken word, with a look back over its shoulder.

Manchester poet, and top-drawer fella, Tony Walsh remembers first hearing Linton Kwesi Johnson’s Sonny’s Lettah on the radio and says: “It hit me in the gut as hard as any piece of art has before or since.” In these times of labels — and spoken word can be very prone to them — it’s good to remember that LKJ knew where he came from and that he was speaking to all of us who knew unfairness and hard times. Tony does just this today.

The book is refreshingly international. New Zealand, South Africa, Iran and Singapore, among others, all get scrutiny. Even front-line soldiers like Singapore’s Stephanie Dogfoot get a mention, which tells you that many of the essayists are in the trenches.

The culture of poetry is reflected in the essays too. Some such as Scherezade Siobhan and Ng Yi-Sheng are quite academic and look for acceptance from “big L” literature, others like essayist Emma Lee from Leicester run with the joy of it all. One of the problems the latter notes is: “Currently there aren’t any poetry magazines based in Leicester city, so for city-based poets, sending out poems for publication means sending them to an editor the poet has never met.

“Even when poets know their poems are of publishable standard, the world of publishing is still predominantly middle class, white and male, so rejections don’t come as a surprise. Further rejections encourage the suspicion that it’s not the poems that are at fault and that the rejections are more about the poet not fitting in.”

'Twas ever thus and it’s a problem when poetry, which is at its best on the fringes, seeks acceptance. We’re not, as poets or people, on the outside because we’ve been overlooked, we’re there because that’s where the big “they” want us. LKJ and I were gigging before computers. I was making zines before computers were for the likes of us. If there ain’t a Leicester zine, start one. As Emma’s essay demonstrates, there’re good things happening there, there’s energy.

Slam gets mentioned, both in Singapore and in a fascinating piece contrasting Edinburgh and Austin, Texas.

Sadly, Scottish poet Milton Balgonie doesn’t get mentioned, but Catherine Wilson certainly doesn’t take Slam as the godsend some take it as and it was never meant to be. She mentions that many poets, including herself, “became annoyed or disappointed when repeated patterns started to emerge” and goes on to chide playing for easy laughs, preaching to the choir and safe writing. “In Scotland I have only ever seen one poet cry onstage … in Austin every third or fourth poet burst into tears halfway through their performance.”

Catherine looks forward, as all the writers do, and sees the importance of people sharing their words and the honesty and joy we can all find in poetry.

This is very much a book for poets as much as it is about poetry. Editor Claire Trevien at Sabotage Reviews has heeded RuPaul’s “don’t fuck it up” advice well. The book examines and shares what’s good with current spoken word. As Tony Walsh says, “You need a pen, a page and passion. Go for it!”

Thursday 02nd Apr 2020
US blocks medical aid to Cuba in show of ‘wild west brutality’
Sunday 05th Apr 2020
Starmer's win is a defeat, but our movement is not beaten
Sunday 05th Apr 2020
ExCel centre's oligarch owners U-turn on plans to charge NHS millions for new field hospital
Saturday 04th Apr 2020
Cuba helped Britons aboard the MS Braemar in their hour of need – now we must help Cuba
Friday 27th Mar 2020
Nurse commits suicide in Italy due to trauma of working on frontline of coronavirus pandemic
Join the 501 Club

In praise of journalism

The commodification of evil