ECUADORIAN authorities were accused of a “set-up” on Tuesday after a leftist former parliamentarian was jailed on trumped-up charges of “rebellion” following last month’s anti-government protests. 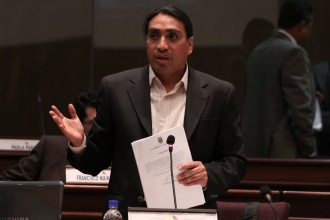 Virgilio Hernandez was sent to prison after the Attorney General’s office accused him of taking part in acts of violence during demonstrations calling for the resignation of President Lenin Moreno.

Mr Moreno refused to step down and was forced to move the seat of government from the capital Quito with mounting pressure over an International Monetary Fund (IMF) imposed austerity package.

Mr Hernandez warned: “The sole accusation of rebellion should be a fact for everyone to realise that it is a set-up,” as he arrived at the hearing.

He is charged with the crime of “rebellion” along with other opposition leaders from former president Rafael Correa’s party.

Mr Moreno blamed his predecessor for the unrest, claiming that Mr Correa and Venezuelan President Nicolas Maduro were funding the protest movement.

Judge Julio Arrieta ruled that Mr Hernandez be held on a preventative prison order to stop him from absconding. If found guilty, he faces a sentence of between five and seven years.

“No proof of violent uprising or the existence of alleged armed groups were presented by prosecutors. They only presented tweets and chat conversations. Ecuador is the only country where a person has been jailed over their opinions on Twitter,” he said.

Mr Aguillar warned of “political persecution” as Mr Hernandez was held based on his personal opinions. This, he said, was also a violation of Ecuador’s constitution.

Sunday 31st Jul 2022
‘They have had to realise that we were not going to give in’
Wednesday 03rd Aug 2022
Starbucks hired former CIA agent in middle of union-busting campaign
Thursday 04th Aug 2022
The Tories will abandon neoliberalism, but only to destroy the working class
Friday 05th Aug 2022
Mega-rich companies told to cut profits, not wages
Friday 05th Aug 2022
Editorial: This Hiroshima Day we must wake up to the real danger of a nuclear war
Join the 501 Club