Manzoor Pashteen, leader of the Pashtun Protection Movement, has been highly critical of the country's powerful military and the government's support of the US invasion of Afghanistan

Pakistani legislator and leader of the Pashtun Tahaffuz Movement, Mohsin Dawar arrives at a Press Club to address a news conference in Islamabad, Pakistan, today
×

CONCERNS have been growing for the safety of a leading human rights activist and critic of the Pakistani military after his arrest by security forces during a series of dawn raids today.

Manzoor Pashteen, the leader of the Pashtun Protection Movement (PTM), was detained along with nine others in police operations in the north-western city of Peshawar.

Local police confirmed that the influential tribal leader had been arrested on charges of making anti-government speeches at rallies and “inciting violence” but no further details were given.

Mr Pashteen’s PTM became a major political force in the wake of the killing of a young Pashtun, Naqeebullah Mehsud, by police in Karachi in 2018.

Highly critical of Pakistan’s powerful military and exposing rights abuses committed against the country’s sizeable Pashtun minority, the PTM began to draw crowds of tens of thousands to its rallies.

Writing in the Morning Star in December, Mr Pashteen explained that the oppression of the Pashtuns had escalated after they refused to support the government during the US invasion of Afghanistan.

“After 9/11, when Pashtun tribes refused to co-operate with the Pakistani state and its pro-US agenda, the army deployed aerial bombardment and heavy weapons in the tribal areas, destroying homes and marketplaces and murdering innocent men, women and children,” he wrote.

He said that Pakistan’s “state-controlled media defends and glorifies military operations against civilians and bans public debate on questions of nationhood and language.” More than 70,000 Pashtuns are estimated to have been killed in Pakistan since 2005.

At least three million Pashtuns had become internally displaced people after military operations in 2009, he explained. Simply exposing such facts, which are ignored by the country’s media, has made the PTM a target for Pakistan’s security services.

Mr Pashteen has called for international solidarity for the country’s Pashtuns and demanded the United Nations take action and support the victims of Pakistan’s internal military operations.

National assembly member for North Waziristan Mohsin Dawar of the PTM demanded the immediate release of Mr Pashteen today saying: “This is our punishment for demanding our rights in a peaceful and democratic manner.”

But he added: “Manzoor’s arrest will only strengthen our resolve. It is my request to PTM workers and supporters to remain calm in response to Manzoor’s arrest. We will devise a strategy after consultations.” 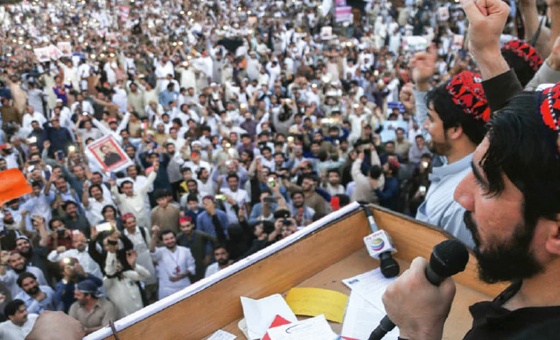 Assange: I can't speak freely to my legal team

Frontex is ‘attempting to sue its critics into silence’

Scotland told to ‘redouble’ efforts to get rid of Islamophobia