Meanwhile, the IOM and UNHCR put pressure on Malta to bring 160 refugees detained on offshore tour ships to dry land

The Alan Kurdi rescue ship at port on the Italian island of Sicily Photo: Sea Eye
×

The Alan Kurdi and the Aita Mari were detained in the Italian port of Palermo, Sicily, on May 6 and 7 respectfully for allegedly breaching maritime safety regulations.

The Alan Kurdi, operated by German charity Sea Eye, saved the lives of 150 refugees in April before it was subjected to a 12-day stand-off with the country.

“It is time to finally put an end to the closed port policy that started under [former interior minister Matteo] Salvini.

“Sea rescuers must not be stopped, but must instead be supported. As long as no rescue ships are allowed to leave port, human lives are at stake every single day.

“Malta’s agreement to distribute people rescued from distress at sea needs to be renewed quickly and permanently. The member states of the European Union can no longer leave Italy and Malta alone when it comes to taking in refugees.

“We therefore ask the Italian government to end the blockade of the Alan Kurdi and the Aita Mari immediately and to start supporting us in our humanitarian work.

“We call on German Federal Foreign Minister Heiko Maas to plead for the release of the [our] rescue vessels.

“We expressly call on German Federal Minister of the Interior Horst Seehofer to support Italy and Malta and to work even harder towards a fair distribution of people who have been rescued at sea, within the European Union.”

Meanwhile the UN refugee agency (UNHCR) and the International Organisation for Migration (IOM) joined NGO calls on Malta to disembark 160 refugees being held in tour boats off the island nation’s coast. 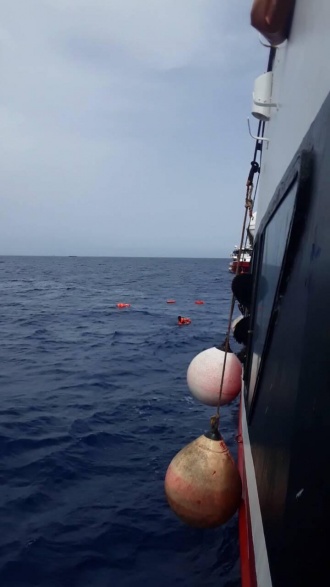 Since May 1, when Malta closed its ports to asylum-seekers claiming the country was unsafe due to the Covid-19 pandemic, the government has been detaining refugees rescued by its armed forces on ships owned by the Captain Morgan tour company.

Some of the people on board one of the Captain Morgan boats contacted the activist network Alarm Phone this week pleading for their help.

“They say that some have started a hunger strike, others attempted to take their own lives out of desperation,” Alarm Phone tweeted on Tuesday.

“The prisoners say ‘anxiety, hopelessness and depression has increased’ and that there is no sufficient health care and food.

“We call on Malta to immediately end this inhumane imprisonment.

“Europe, how can you let hundreds of vulnerable people be detained at sea along your external borders and by an EU member state?"

Thirty Maltese charities and human rights organisations signed a open letter yesterday, calling on the government to “immediately put an end to this ill-treatment, to provide [the refugees] with the medical and psychological care that they urgently need, and to let them in.”

The IOM and UNHCR said in a joint statement today: “[We are] calling Malta and other European States to speed efforts to bring some 160 rescued migrants and refugees, who remain at sea on board two Captain Morgan vessels, on to dry land and to safety.”

The organisations said they were “deeply concerned” by reports of European states ignoring or delaying responses to refugee distress calls, especially since at a time when there are no civil fleet or state ship in the Mediterranean.

“We remind states of their obligations under international law to immediately assist people in distress.

“These obligations cannot be traded away with the offer of fuel and aid. States must take every effort to promptly rescue people in distress, as a delay of even a few minutes could make the difference between life and death.

“A clearly agreed system for post-disembarkation relocation is urgently needed if we are to finally move away from a perpetual cycle of negotiations and ad-hoc arrangements that put the lives and health of people at further risk.

IOM and UNHCR unequivocally reiterate that no-one rescued at sea should be returned to Libya.

“The misery and risk to life posed by intensifying conflict, arbitrary detention and widespread human rights violations, among other factors, mean it cannot be considered a place of safety.

“Direct or indirect state involvement through commercial boats in the return of rescued migrants and refugees to Libya may constitute a violation of international law.”