Security services blockaded the left-wing party’s provincial offices to prevent members holding a demonstration against the removal earlier this week of five democratically elected mayors after a decision by the Interior Ministry to ban the protests.

Police refused to let HDP politicians and activists leave the building and journalists were prevented from covering the protest and subsequent police operation. Press cards were confiscated on the grounds that they had not been authorised by the state. 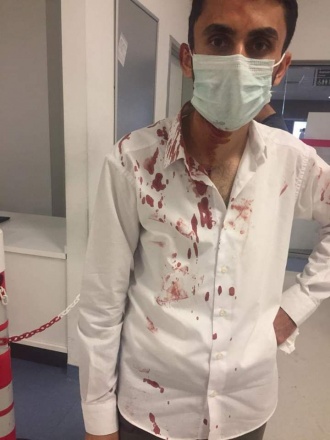 HDP Ankara provincial co-chair Vezir Coskun Parlak was detained as he attempted to read a party statement and was badly beaten, with blood pouring from his face.

Members staged a sit-in protest, shouting slogans, including “HDP is the people” and “No to state fascism” and police swooped to detain HDP MP Nihat Akdogan, along with former provincial co-chair Zeyno Bayramoglu. Lawyer Alisan Sahin was also held with at least five others.

People who watched the police operation from an apartment block opposite the HDP offices were also hauled into custody.

The action was organised in protest against the removal of five more democratically elected HDP mayors — from the Igdir, Siirt, Kurtalan, Baykan and Altinova municipalities — earlier this week.

The latest operation means that 45 of 65 HDP-run municipalities have had their mayors removed on trumped-up terrorism charges since local elections last March. A further six were not allowed to take office despite being elected, bringing the total to 51. According to the HDP, at least 21 of the mayors remain incarcerated.

The party has previously warned of a “political genocide” against Turkey’s sizeable Kurdish population.

More than 15,000 HDP members and activists have been detained since 2015, with 6,000 receiving jail sentences, according to the party.

The HDP has challenged the ruling Justice & Development Party (AKP) to hold fresh elections in the municipalities where the government has appointed “trustees,” insisting that the removal of democratically elected mayors from their posts cannot be allowed to become the “new normal.”

Those held in Siirt were released from custody today to cheers and applause — but were blocked from giving a statement. HDP spokeswoman Meral Danis Bestas welcomed the move, but said: “We will continue to resist and fight as long as the trustees appointed to our municipalities.”