A SECOND Saudi ship has left Italy without deadly cargo for its war on Yemen as trade unionists and protesters form a “broad popular front” for peace.

Workers from the Italian General Confederation of Labour (CGiL) union at the port of Genoa in north-west Italy refused to load the cargo of arms onto the Bahri Jazan yesterday.

It was forced to leave minus its deadly shipment despite warnings from Liguria region president Giovanni Toti that the action could affect local jobs and damage trade.

He came under fire for a scathing attack on the dockers, urging them to load the weapons.

They refused and said they condemned “the arms trade with Saudi Arabia, a state that implements the death penalty without a fair trial, where torture and oppression of religious and political minorities are commonplace and has been waging a military aggression against the Yemeni population for the past four years.”

A union statement appealed to Foreign Affairs Minister Enzo Moavero Milanesi and Defence Minister Elisabetta Trenta to stop selling arms to Saudi Arabia and contributing a conflict that has been described by the UN as the “most serious catastrophe in the world.”

Union members remained in the port to monitor the ship and ensure that the equipment was not loaded.

It is the second time “Genoa said no” after strike action last month forced the Bahri Jazan’s sister ship, the Bahri Yanbu, to leave without its war shipment.

Docker and USB union member Giacomo Marchetti told the Star that it was more difficult to organise this time in the face of attacks by the regional president.

But he said that the victory was “an important step in a longer battle.”

The union was pressed into strike action, which he said was “vital in winning this kind of battle.”

Coming as the “US is pressing for a new war against Iran” he explained that working-class action can stop wars in their tracks.

“We need to discuss internationally what is going on. But we send the message to the Italian government to close the ports to war and open them to refugees.” 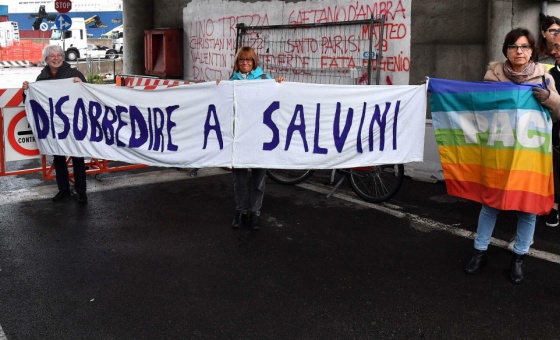