Tear gas and baton rounds on display at the Condor stand at DSEI 2019, including the same type of canister (GL-203/L) linked to the death of Bahraini man Abdulaziz al-Saeed. Photo: Phil Miller
×

A BRAZILIAN tear gas company has been kicked out of a major arms fair in London after it was found to be marketing a banned “electro-shock device” at the event.

Condor, which manufactures “non-lethal technologies,” had its stand shut down at the Defence and Security International (DSEI) fair and its staff “ejected from the event with immediate effect,” according to a statement issued by the organisers on Friday.

The electro-shock device is “not permitted under UK law and is a breach of the event’s strict contractual terms and conditions,” organisers said.

The DSEI statement said that officials from HM Revenue and Customs, “who are present throughout build-up and the duration of DSEI, were in attendance and have taken possession of the marketing brochures.”

When the Morning Star visited DSEI on Thursday, the Condor stand was in operation with numerous prospective customers seen speaking to company staff. 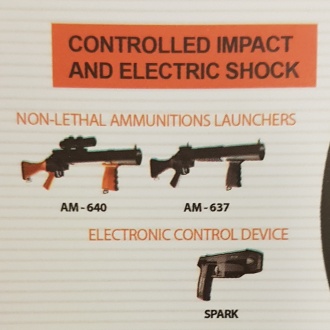 The Star picked up a copy of the company’s brochure which contained the banned “electronic control device” named “Spark.”

Condor’s brochure claims that “this equipment is developed to avoid fatalities or permanent injury,” but the company has previously been criticised over its human rights record.

In 2015 activists complained that its products were linked to the death of Bahraini man Abdulaziz al-Saeed, after police flooded his village of Bilad al-Qadeem with Condor tear gas.

A photograph posted on Twitter by activist Nabeel Rajab at the time claimed to show Condor’s GL-203/L canister on the doorstep of Mr Saeed’s home.

That exact same product was on display at DSEI last week — although it is not prohibited from sale in Britain.

Campaign Against Arms Trade spokesman Andrew Smith said the latest incident shows why the biennial DSEI event should not be allowed to take place.

“DSEI is a one-stop shop for militaries, torturers and human rights abusers from around the world,” he said.

“The fact that the organisers can’t even make the companies in attendance refrain from promoting illegal equipment is a sign of how lawless and morally bankrupt the industry is.

“The deals being done at DSEI could have a terrible impact for years to come — whether they are for fighter jets, bombs, tear gas or illegal electric shock equipment.

“This isn’t the first time DSEI has seen illegal equipment being touted.

“The best way to ensure that companies are not flouting the law is for the government to finally shut down this despicable event.”

A wide range of heavy weaponry and riot control equipment is allowed to be displayed at DSEI, but there is a specific ban on electro-shock gear under the Export Control Order 2008.

In 2013 DSEI was criticised when a pair of French and Chinese firms were found to be promoting stun guns/stun batons and leg restraints at the fair, which lawyers said were prohibited.

Last Tuesday DSEI’s top spokesman, retired British army General Roddy Porter, directly assured the Star that it had taken steps to prevent such items being marketed at the event.

Mr Porter said: “If a manufacturer is found to have advertising material on that kind of equipment, restraint kit or arrest kit that is banned by convention, they will be kicked out.

“We are pretty sure because this hasn’t happened for a number of years. We would have it banned or removed. Over the years we have learnt some lessons.”