Labour's Diane Abbott and John McDonnell join Keep Our NHS Public, Just Treatment, We Own It and Your NHS Needs You activists outside Parliament
×

by our Industrial reporter @TrinderMatt

The statements opposing the legislation, which has its third reading in Parliament on Tuesday, were signed by more than 300,000 people.

A coalition of activists from Keep Our NHS Public, Just Treatment, We Own It and Your NHS Needs You joined forces with patients and health service staff to make their opposition known.

The activists were supported by left MPs John McDonnell, Barry Gardiner, Grahame Morris and Diane Abbott, who urged her colleagues to reject the “terrible Bill” in a Twitter post today.

Demonstrations were also staged in Westminster and Manchester last night as public outcry over the Bill grew louder. 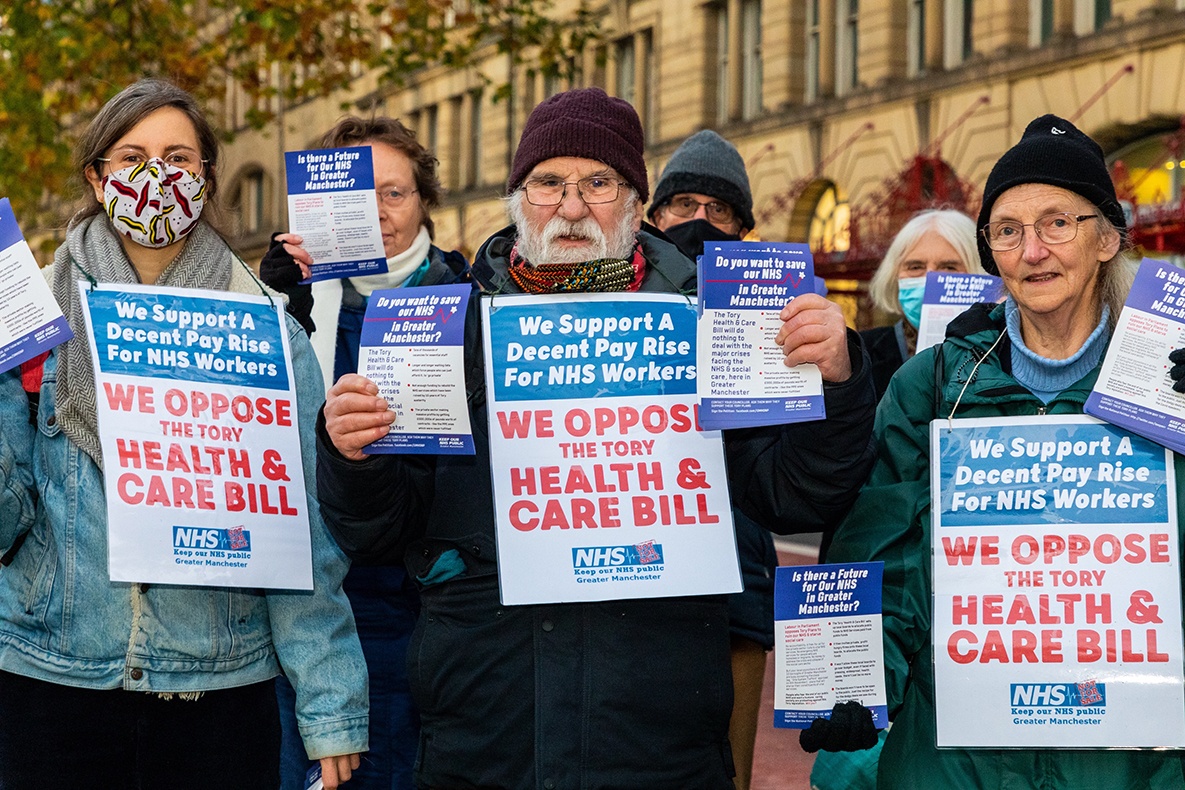 Protesters at Manchester's Victoria station said the ‘Americanisation’ of the National Health Service is already under way in the city (Pic: Neil Terry Photograph)

Health Secretary Sajid Javid has claimed that the legislation will create a “truly integrated” healthcare system with less central bureaucracy, but union Unite warned this week that the “privatisation Bill” spells disaster for the NHS.

The union said the legislation would slash funding and lead to increased cuts and cronyism, allowing even more contracts to be awarded to private companies without due scrutiny.

Campaigners believe that the proposals will worsen the “postcode lottery” of care while allowing people to be discharged from hospital without an assessment and care plan in place.

The legislation fails to address spiralling waiting lists and chronic understaffing while placing patient data at risk of abuse by third parties, the activists warned.

Keep Our NHS Public campaigner Greg Dropkin said: “The Health and Care Bill has been spun as ending privatisation in the NHS. In fact, it gives the private sector a direct role in managing the NHS and shaping its priorities.

“It won’t resolve the crises caused by massive staff shortages, and a workforce exhausted and demoralised by an ongoing pandemic which the government failed to control.

“The Bill is being promoted as applying the lessons from Covid. The lesson the government learned was full scale co-operation with the private sector.”

We Own It lead campaigner Johnbosco Nwogbo warned Tory ministers that the public “really hates their plans to open our NHS to more privatisation and sleaze, and will stand up against it.”

Mr Gardiner, Mr Morris and comedian Francesca Martinez were also due to speak, while celebrities including Stephen Fry, Jo Brand, David Tennant, Vicky McClure and Frankie Boyle have backed the Your NHS Needs You campaign against the legislation.

Speaking before the protest, Unite general secretary Sharon Graham said: “Our members in the NHS and social care are coping with unacceptable conditions.

“Staffing levels are dangerously low, waiting lists are at unprecedented highs, and morale is rock bottom.

“The Health and Care Bill is being used to further run down the NHS and to bring in more privatisation by the back door. It will also lay the path for lower standards of care and further attacks on the pay and conditions of NHS staff.

“We will ramp up resources to defend our health sector members and oppose these unnecessary attacks.”

Jacalyn Williams, the union’s national officer for health, said the legislation was a “Trojan horse for more cuts and cronyism and a licence for politicians to run down and sell off our NHS.

“Attempting to drive this through while we are still in the middle of a pandemic and without a care for patients or staff already stretched beyond their limits is a disgrace.”