A UNION is launching legal action against police after they arrested its lawyer and threatened striking workers on a picket line outside a university hospital in London today.

Twenty-five security guards, who are members of the United Voices of the World (UVW) union, were beginning a 48-hour strike against outsourcing at St George’s Hospital, University of London.

They are employed by contractor Noonan and are paid less and suffer worse working conditions than directly employed staff at the university.

But the Metropolitan Police attended the picket line yesterday morning in an attempt to remove protesters from NHS grounds and arrested barrister Franck Magennis, the head of the union’s legal department.

UVW warned that the incident “marks a potential watershed in industrial relations and could set a dangerous precedent for the erosion of civil liberties and workers’ rights if left unchallenged.”

UVW spokesman Kane Shaw told the Morning Star: “The incident, which took place shortly after 9am, saw 12 police officers arrive at the university after being called by management to dispel workers and trade-union officials from a lawful picket.”

He said police handed out management leaflets instructing workers not to hold pickets on NHS property.

“Several police officers then warned all workers and union officials that they would be arrested if they failed to leave the property within five minutes,” he said.

“When barrister Franck Magennis enquired into the legal basis of the warning, he was arrested and handcuffed and subsequently de-arrested and released less than five minutes later on the condition that he immediately leave the site.

“The incident appears to represent an attempt by the Metropolitan Police to use criminal sanctions to frustrate lawful industrial action.

“We have never received treatment like this on any other picket line.”

Mr Magennis said that if the police action was not challenged it “would allow the Metropolitan Police to criminalise what is lawful civil activity and would have a chilling effect on workers’ ability to stand up to bosses and exercise their civil liberties.

“Anyone concerned with a worker’s right to take industrial action — and with a citizen’s right not to be arbitrarily arrested — should be seriously concerned about the way the police have acted today. This is an outrage.”

A Metropolitan Police statement confirmed that police were called to the hospital in Tooting, south London, shortly after 8.30am to reports of anti-social behaviour.

The statement said: “Officers attended. A group of protesters were found who were refusing to leave NHS premises.

“One of the protesters was arrested for a public order offence but was then de-arrested once the group of protesters had been moved off NHS premises.”

St George’s said it accepted the workers’ right to strike but said that police were called when strikers refused to leave “NHS boundaries.”

UVW called for support at the gates of the hospital today from 8am today as the guards continue their strike action. 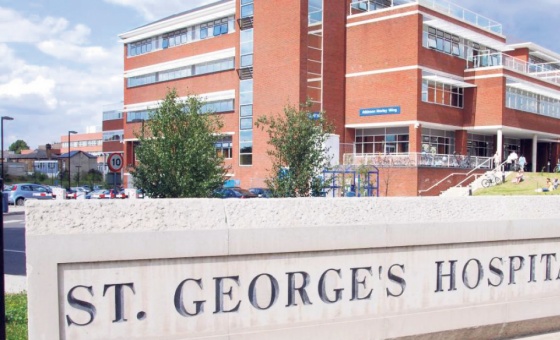