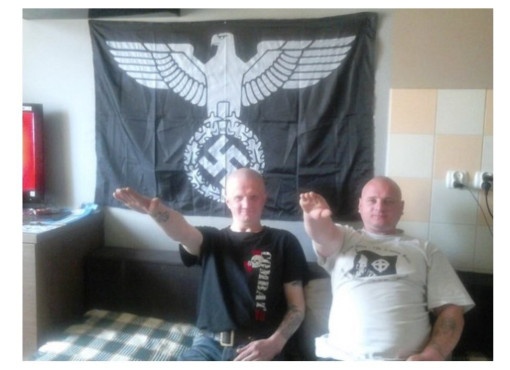 Photos uncovered by the Anti-Fascist Network show Mr Robinson and Mr Batten with members of the recently established Polish division of the DFLA, including Tomasz Gawdziakowski and Shaun Holt at a demonstration in Salford on February 23.

The new division, which was announced in January at the DFLA’s first annual general meeting, was approached by organisers of the “Pandorama” event, where Mr Robinson’s latest attempt at a documentary was screened, to provide security for the two right-wing leaders.

Matt Hunter — also known as Thomas Hunter — Mr Holt, Mathew Bartnik, Monika Piotrowska, and Mr Gawdziakowski are all admins of the group’s Facebook page and have all demonstrated their racist views and advocated violence publicly on the social media site.

Mr Gawdziakowski has several nazi tattoos including a large swastika tattooed on his chest, a C18 sign to represent Combat 18 — a British neonazi terrorist group — an SS death’s head logo and multiple other nazi symbols. 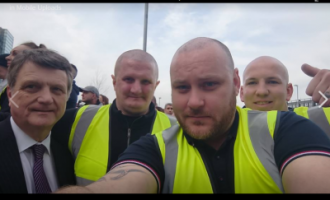 Mr Batten, a serving politician, has also been pictured shaking hands with Mr Gawdziakowski at a separate event.

The DFLA and and Mr Robinson have previously claimed to “despise nazis” and “shun failed extremist politics” on the left and right, while the DFLA’s mission statement, despite evidence to the contrary, claims it is an anti-racist, anti-extremist and anti-bigotry organisation.

Stand up to Racism co-convener Sabby Dhalu told the Star: “Clearly Ukip, the DFLA and Tommy Robinson are developing ever closer links to open fascists.

“This underlines why we must unite against them on the streets and at the ballot box. We must also show that the majority of people abhor such groups, oppose racism and value our multicultural society.

“That’s why we urge people to join us on Saturday’s march marking UN Anti-Racism Day.”

Demonstrators will assemble on Saturday March 16 at Park Lane in London at noon, at Cardiff City Hall at 11am and at George Square in Glasgow at 11am.

Protests will also take place across the globe in the US, Canada, Australia, Brazil and in Europe.