Guards for hire: Special report on the private security industry

Thumbs up: Terry Hughes (left) takes a selfie at an unidentified freight port
×

TERENCE HUGHES, one of Britain’s most notorious security guards, was last pictured leaving the Old Bailey in 2014, looking visibly relieved after being cleared of Jimmy Mubenga’s manslaughter.

His solicitor told reporters that Mr Hughes “bitterly” regretted the death of the Angolan deportee, but said he had been “trying to do a very difficult job in difficult circumstances”.

What he did next is less well known. An industry insider has sent the Morning Star what appears to be a more recent photo of Mr Hughes.

It shows him giving the camera a thumbs-up while standing in a high-vis vest at the back of a large ship, docked in a sunny freight port.

Although we have not been able to independently authenticate the photo, it suggests that Mr Hughes now holds some kind of maritime security role.

It is an aspect of the private guarding industry that is less high profile than escorting migrants on deportation flights.

Shipping lines and ports have their own contracts with security firms, which offer a very specialised and bespoke service to search their vessels for stowaways.

If any unwanted guests are found on board, the guards may then escort them back to their port of departure.

The process stays within the private sector, and the Home Office may not become involved unless the stowaways claim asylum.

In December, the subject hit the headlines when four stowaways allegedly threatened the crew of a ship off the Kent coast near Margate, towards the end of a long voyage from Nigeria.

On that occasion, the incident was deemed so serious that British special forces raided the ship.

This week, a few dozen migrants have crossed the English Channel in small boats, causing the Prime Minister to warn on Friday: “We will send you back.”

And now, with a potential no-deal Brexit just weeks away and ports facing gridlock, pressure on the industry and authorities could grow as more people try to arrive as stowaways.

One company director, Greg Piggott of Iris Security, told the Morning Star that “we don’t really get that many stowaways” at present. He described the industry as “very, very small.”

His firm also handles the repatriation of drunk airline passengers or others found to be “inadmissible” upon arrival.

The small size of the industry means that it is not dominated by outsourcing giants such as G4S, Serco and Mitie.

Company records show that the address of Mr Piggott’s firm is that of a residential property near Heathrow, and anyone wishing to contact him for his services is told to call his mobile number – which ends dramatically in 007 – or email him on a Yahoo account.

Those who try to contact him on WhatsApp will be struck by his black skull avatar.

On its website, Iris claims that it only employs officers with a background in the “military, police, immigration” or other “highly skilled security personnel.”

Last week, Mr Piggott’s LinkedIn account said he was working as a Home Office immigration officer and running his private security firm at the same time.

A Home Office spokeswoman told the Morning Star: “We do not comment on internal personnel matters” – and Mr Piggott has since removed the reference to the Civil Service job from his social media profile.

The ministry also denied ever hiring Iris Security to conduct work on its behalf, although the firm’s website suggests that its staff are well suited to such tasks.

Mr Piggott says his “immigration custody escorts” are trained in how to accompany migrants from immigration removal centres in Britain and use “control and restraint” techniques, including controversial “body belts.”

Iris has links to a web of small private security firms, one of which (ITA Overseas Escorts) was originally run by murder plot mastermind Mark Ayres.

Mr Ayres, a former police officer, was jailed for 13 years in 1995 for arranging the murder of another man.

He was released early from prison and set up ITA in 2006, quickly winning a Home Office contract to deport migrants from Britain.

His fellow directors included Robert Baggaley, who went on to rebrand ITA as Global Custodial Services (GCS) after Mr Ayres left the firm.

GCS now has a partnership with another anti-stowaway business called Robmarine Shipping, which Iris also claims to work with.

There is no suggestion of wrongdoing by Iris, GCS or Robmarine. 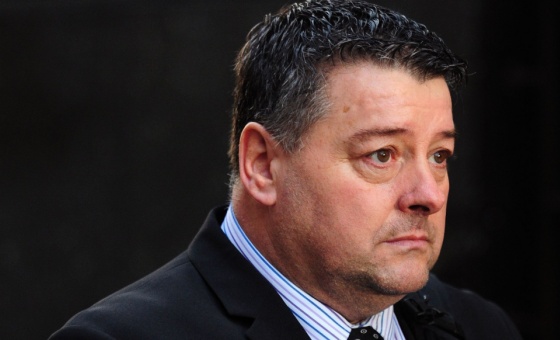