CLIMATE CHANGE activists across Britain demanded urgent government action to rein in global warming and wildlife losses as they launched a fortnight of action today.

Extinction Rebellion says its two-week programme of protest is part of an international rebellion, with action taking place in 72 major cities worldwide. 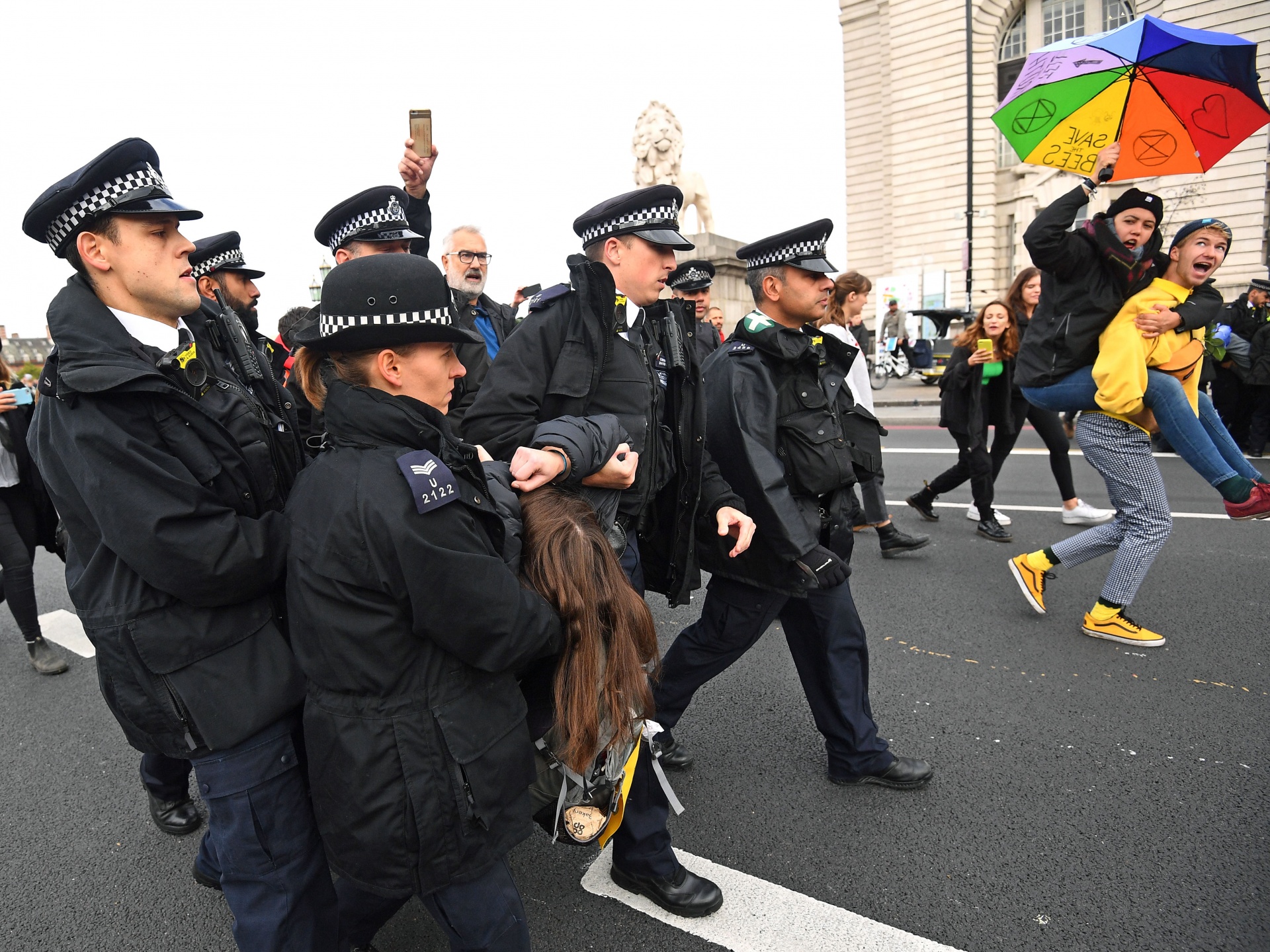 Thousands of demonstrators brought Westminster to a standstill, as groups of activists blocked the roads surrounding Parliament and Whitehall.

By 3pm, the Metropolitan Police said 148 people had been arrested in connection with the protests.

Banners read: “Tell the truth” and “No coal mines, no fracking,” while among the musical performers was a steel band. 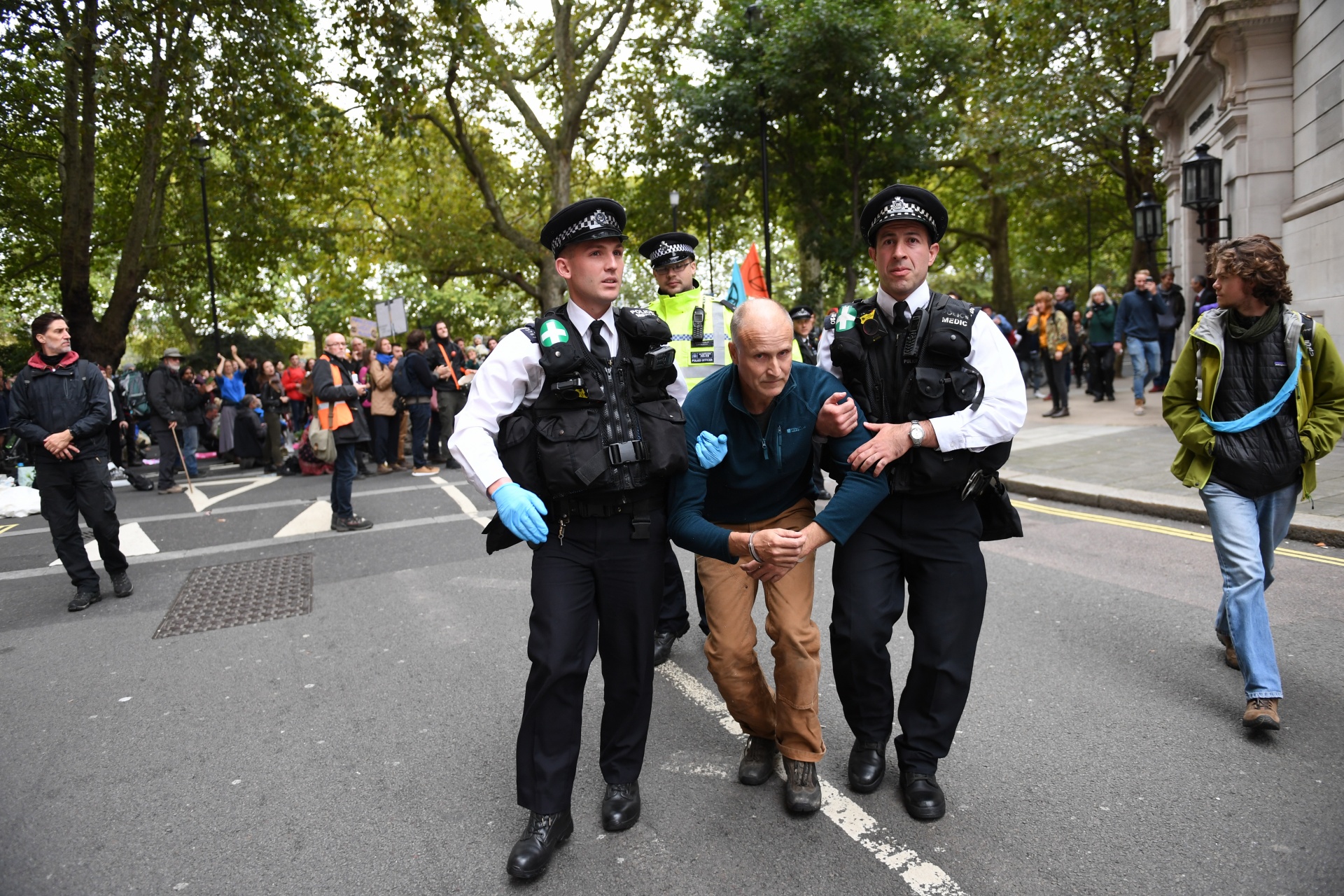 Diverse approaches to protest could be seen, with some activists climbing onto or under vehicles and others taking part in a yoga class or a sewing group.

An impromptu cricket game was also held outside the Supreme Court and the streets rang with drumming, whistles and chanting.

XR Peace protesters attached themselves to a mock Trident missile outside the Ministry of Defence building to press for resources to be redirected from the military to address the climate crisis. 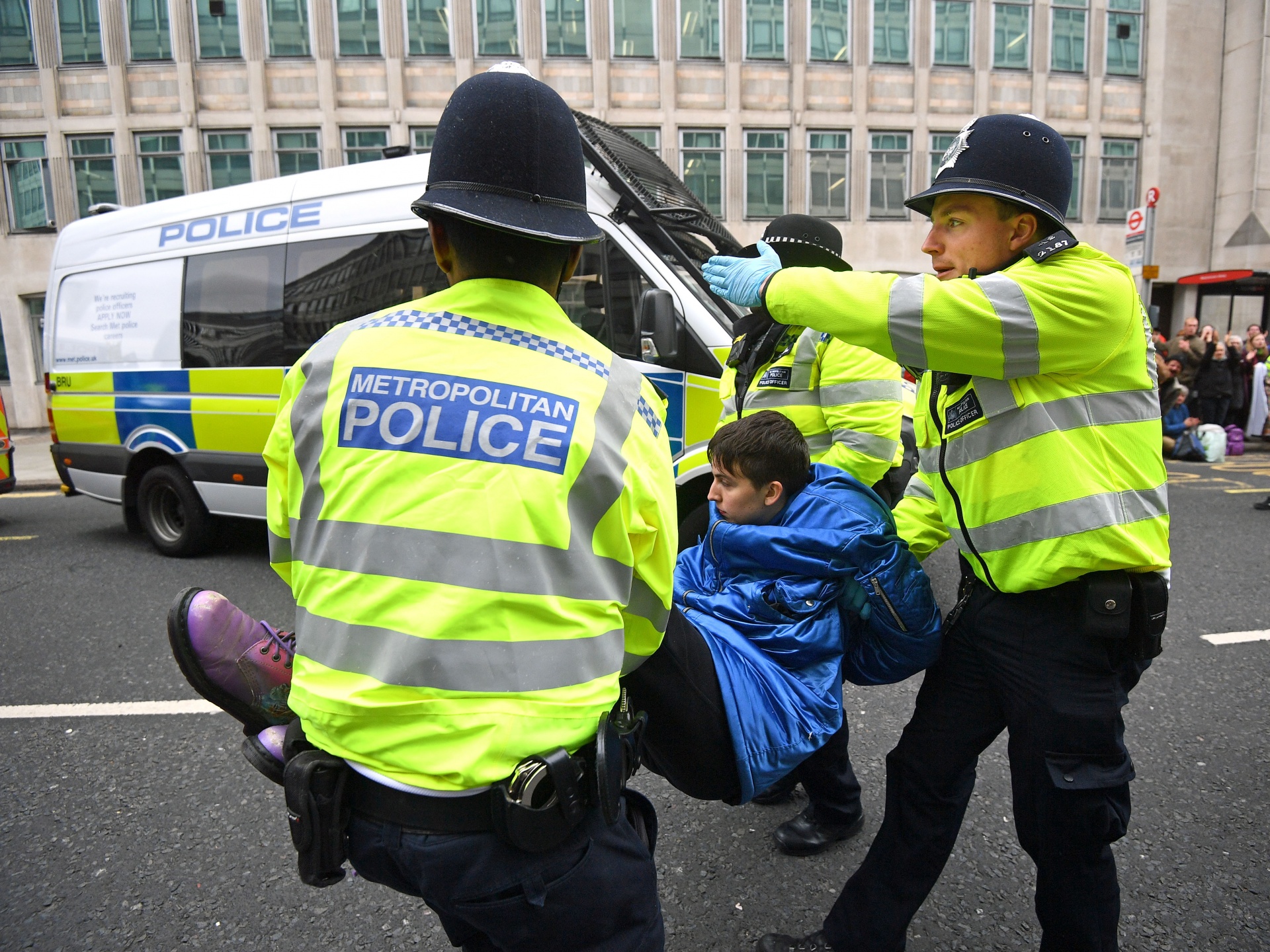 Trident Ploughshares founder Angie Zelter, who was arrested for her involvement, warned that climate change causes war and vice versa.

She said: “About 6 per cent of global carbon emissions are from military activity. As the climate crisis gains pace, there will be increasing tension.

“If countries continue to resort to war as a means of solving conflict, we will not be able to avert climate crisis.” 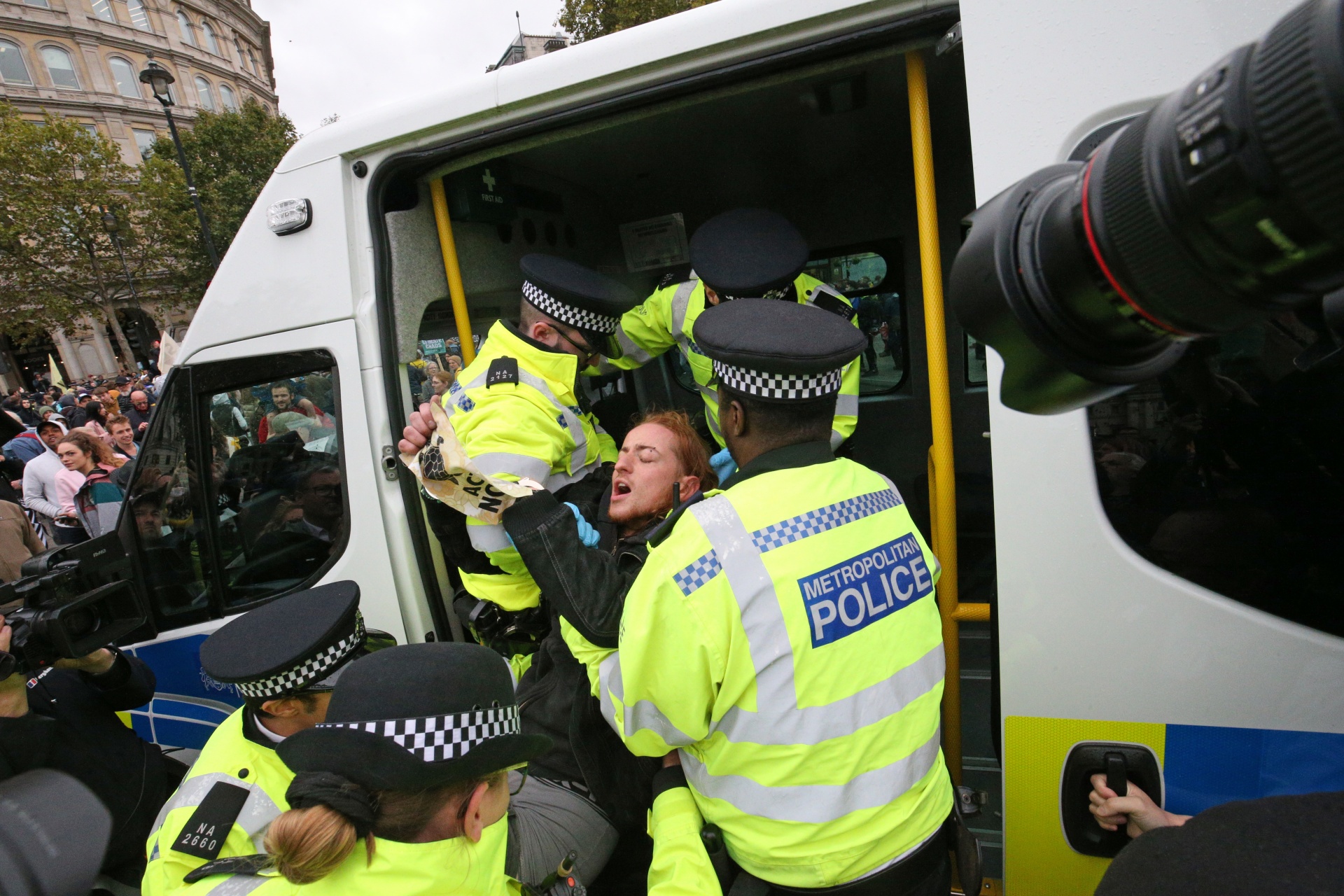 Sixth form student Linnet Drury, from Oxford, said: “I want to do everything in my power to put pressure on the government to act now on the climate emergency.

“The climate injustice is so great that I am prepared to miss school.”

Young activist Tash, from Liverpool, said: “The police tactics seem to be against our rights to non-violent protest. But a bit of rain and the lack of gazebos isn’t going to stop us from rising up.” 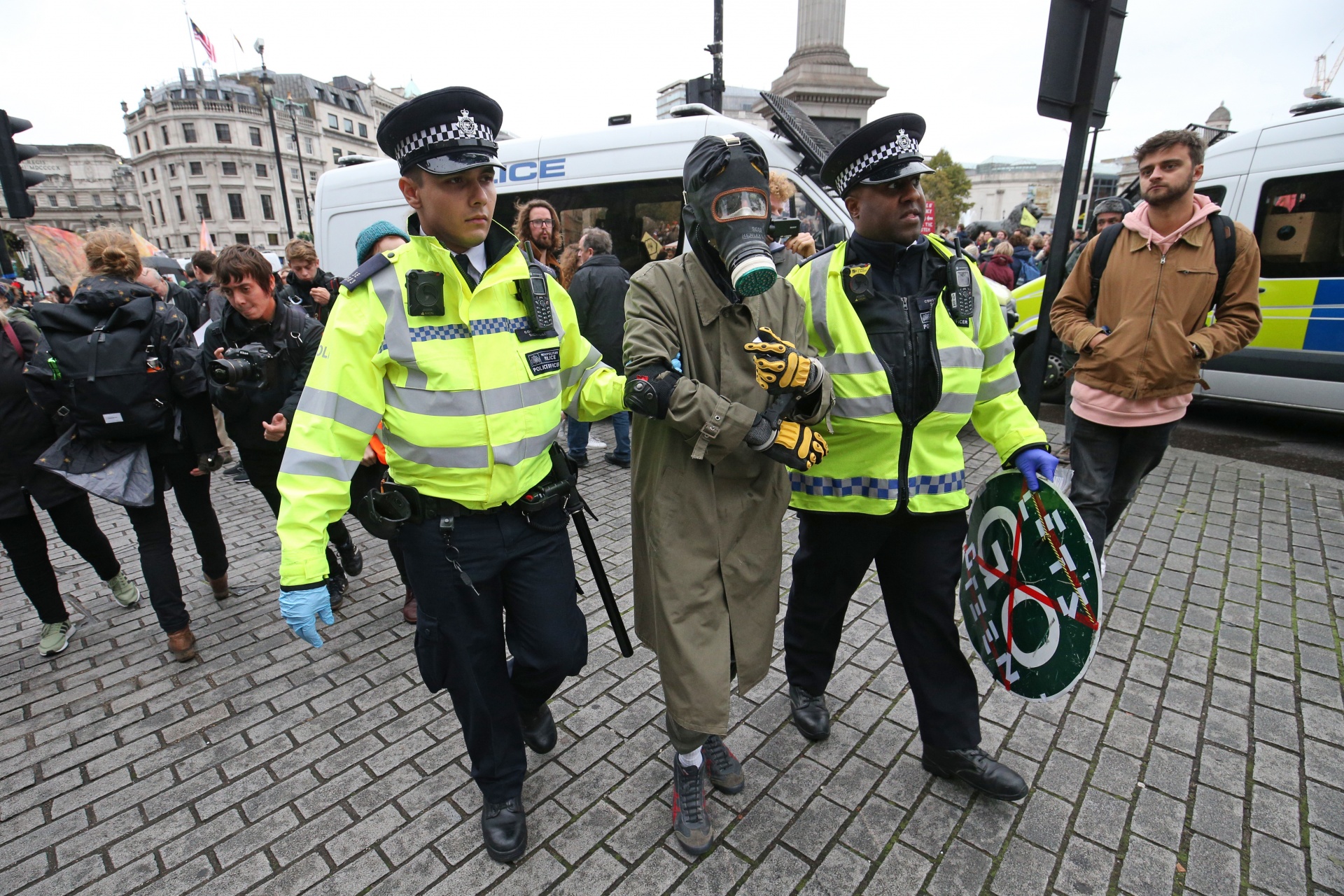 Actor Juliet Stevenson, one of several celebrities taking part in the demonstration at Trafalgar Square, said she was “delighted to see so much engagement from young people.

“They’re  talking about 2050 and scientists have said we have 12 years before we’re in a place where the climate is irreversibly damaging our planet and we won’t be able to repair or fix it.

“We need to make them realise that time is not on our side at the moment.”

The protest is expected to be five times bigger than that staged by Extinction Rebellion in April, during which more than 1,100 arrests were made.