Anti-war protesters outside the Bank of England today
×

PROTESTERS gathered outside of the Bank of England (BoE) today to demand it give Venezuela back 31 tonnes of gold that belong to the Latin American country.

The crowd chanted “no blood for oil” and “BoE, you’ve been told, give Venezuela back its gold” as a masked figure of US President Donald Trump danced around with blocks of “gold.”

It comes as the self-styled leader Juan Guaido wrote to Prime Minister Theresa May requesting she send the gold, worth almost £1 billion, to him instead of the government of elected President Nicolas Maduro.

Venezuela Solidarity Campaign (VSC) vice-chairman Doug Nicholls said piracy seems to be “up and running” at the Bank.

“On the one hand British politicians cry crocodile tears over what they see as impoverishment and hunger in Venezuela, on the other they ignore even the UN’s recognition that much of this has been caused by US sanctions, and to rub salt into the wound they’re trying to steal Venezuela’s gold,” he said. 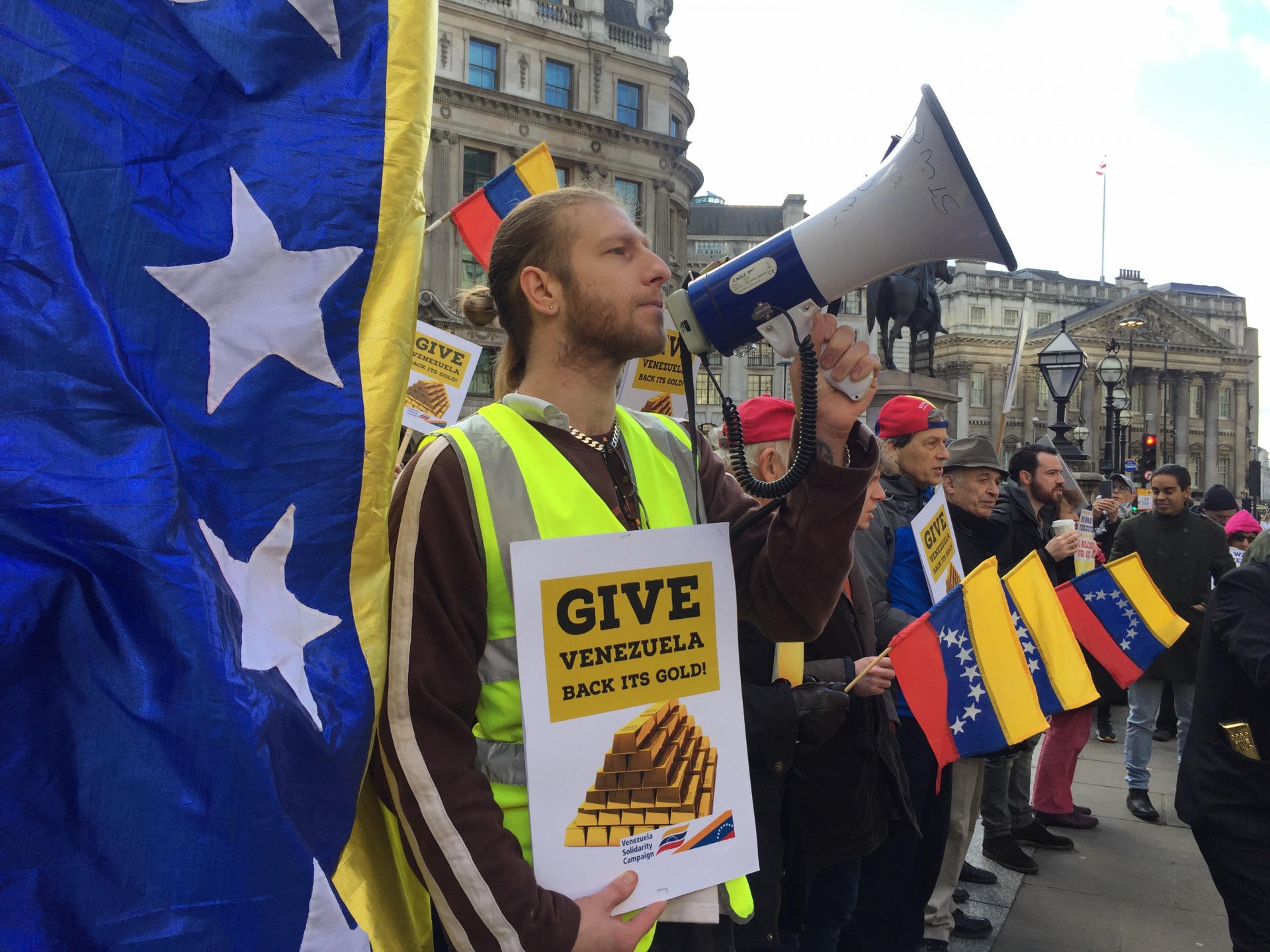 Labour MP Chris Williamson, who attended the demonstration, told the Star that for the British government to be “falling in line behind” and “behaving like Trump’s poodle” is “completely unacceptable,” as is the bank’s seizure of assets belonging to a sovereign foreign nation.

Mr Williamson said: “It is against all democratic norms. There can be no justification for the Bank’s action and I wonder whether they have been put under pressure by the British government to seize these assets in this way.”

The Derby North MP has called on the British government to use its offices to create a discussion to get the different factions in Venezuela around a table to “hammer out a democratic solution.”

He said: “We need democratic dialogue, not threats of military intervention and more sanctions which will only lead to huge suffering for Venezuelan people.” 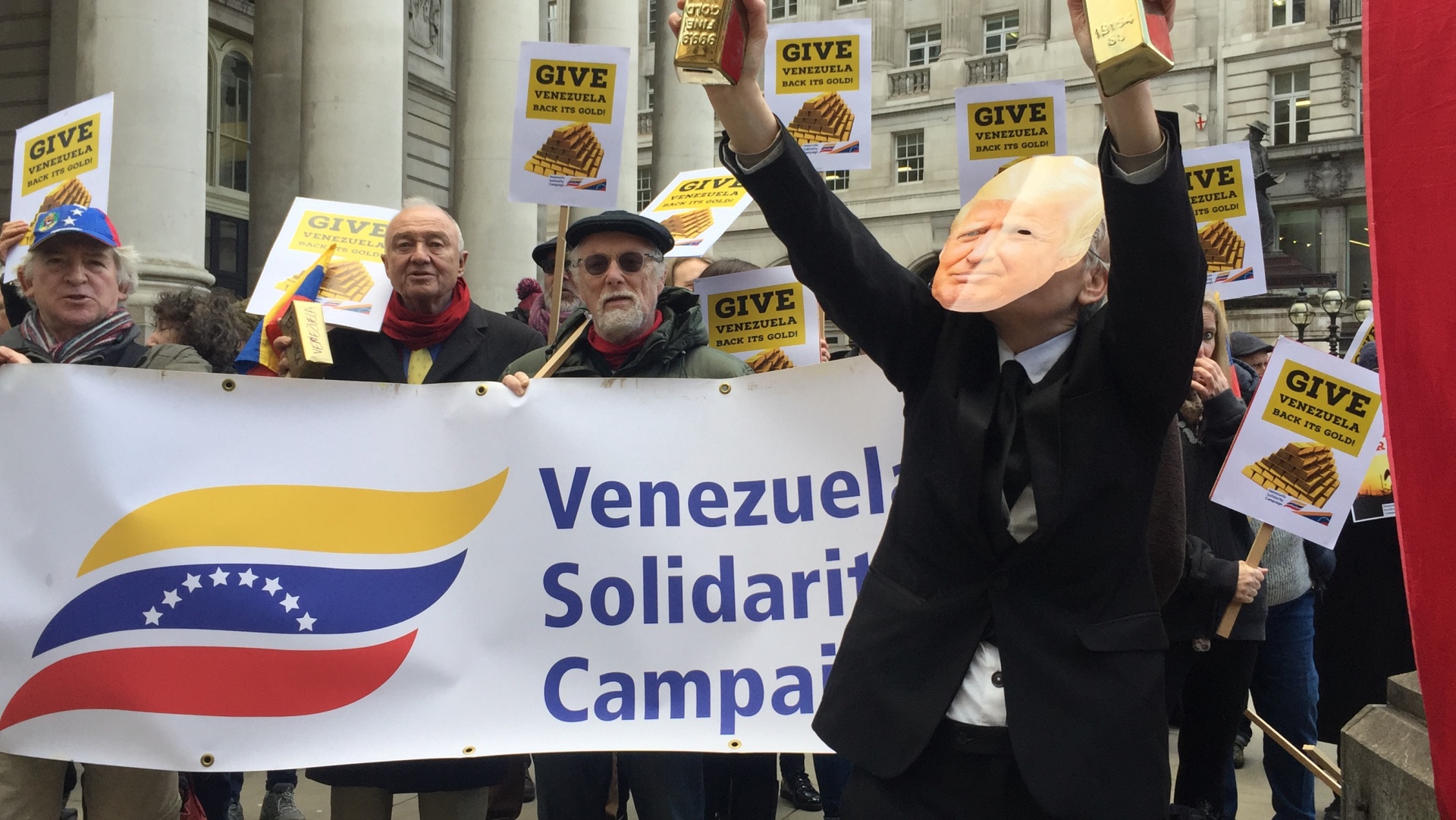 On whether military intervention was likely, Mr Williamson said that based on the “bellicose rhetoric” heard from Mr Trump, US security adviser John Bolton and British Foreign Office Minister Alan Duncan he “wouldn't rule that out.”

He said: “I don’t think there’s any appetite among the British public for another foreign intervention.

“We saw the disaster of Iraq, we saw the lies that were told leading up to that and it seems that we are in a very similar situation right now.

“Therefore, we need to speak out as loudly as we can against the warmongers who are beating the drums of war very clearly.”

Former Mayor of London Ken Livingstone also attended the protest and said Britain should be supporting dialogue instead of “kow-towing” to the US.

As the protest was taking place, Labour’s shadow Foreign Office minister Liz McInnes urged ministers in Parliament to rule out the prospect of military intervention.

She asked if the issue had been discussed with the Trump administration and whether Britain had promised any support. Mr Duncan indicated a potential for “further targeted sanctions.”

The politics of the Cummings scandal