DOZENS of locals rallied against immigration raids and deportations in south London today in response to the targeting of delivery drivers by police.

The Metropolitan Police came under fire earlier this month after officers boasted about detaining riders from companies like Deliveroo in Tooting for immigration checks.

During the force’s 90-minute operation, 48 bikes were stopped and two people arrested for immigration offences.

Today, more than 100 Tooting locals took to the street to oppose the immigration raid and stand in solidarity with migrant communities.

Marching down Tooting High Street protesters chanted: “When migrants are under attack what do we do?” to replies of: “We fight back.”

The rally was organised by gig economy “pop-up” union IWGB, Lambeth Unison, Wandsworth Momentum, Another Europe is Possible and the Labour Campaign for Free Movement.

Lambeth Unison branch secretary Ruth Cashman said: “As a community, we came together to make it clear that migrants are welcome here, and that immigration enforcement vans are not.

“We have a government that is hell-bent on expanding the hostile environment, dividing working-class people against each other and scapegoating migrants — and with free movement [within the EU] having ended after Brexit, we know things are only going to get worse.

“If necessary, we need to be willing to take matters into our own hands.”

Ms Cashman said the community wanted to replicate actions taken by locals in Glasgow who earlier this month stopped a Home Office immigration raid, and build their own anti-raids network.

The Home Office also faced criticism over the weekend after an investigation uncovered shocking treatment of asylum-seekers being deported on a flight to EU states last year.

The report by Liberty Investigates found that border guards deliberately inflicted pain on two deportees at risk of suicide and self-harm, in a bid to restrain them.

The disturbing findings have prompted calls for Home Secretary Priti Patel to resign.

Alison Thewliss MP, chair of the all-party parliamentary group for immigration detention, told Liberty Investigates: “This behaviour is barbaric and has no place in decent society.

“The Home Secretary has presided over this hostile environment and she should consider her position in light of these shocking reports.” 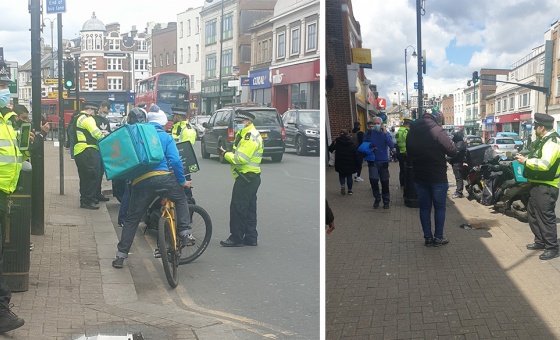 Fears of a political coup in Honduras